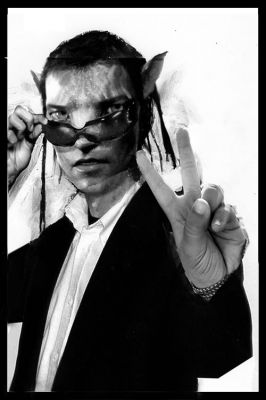 Under what rock have you been hiding to miss the storm around James Cameron’s environmental parable, Avatar? Certainly not beneath a hunk of unobtanium: it floats. In Cameron’s epic, this strange rock is the occasion for a future conflict on a world far away between the organic, indigenous Na’vi and the imperial, profit-driven humans, who are looking to dig the very soul out of the hyper-lush moon of Pandora.

The film, distributed by Rupert Murdoch’s News Corporation — owner of right-wing media around the world — has caught flack from conservative critics for peddling a message that’s hostile to the American way, imputing only malign motives to corporations and only destructive impulses to capitalism. However, one imagines that the film’s billion-dollar earnings will soothe Murdoch’s right-wing conscience.

As for Cameron, it’s clear that he courted criticism by consciously producing an “environmental” film. In an earlier “scriptment,” the project that became Avatar had a far richer back story. He explains that it centers on the “basic principles of interstellar imperialism, circa 2100 A.D.”

In the original tale, we see an Earth denuded of life. Half of the planet’s species are extinct. The rich live in Yosemite, an upscale condo park. The poor are left to farm algae on the coasts, eating the only source of food left to humans. The hero, Josh (not Jake) Sully is never promised his legs back. He’s simply promised the possibility of an avatar that can walk on a world that has greenery, both of which are impossible for him on Earth.

In the Avatar that made it to production, nation-states have been consigned to the dustbin of history. The movie opens on a colonial mining expedition to a bluegreen moon in the Alpha Centauri system. The company behind it all is called the “Resource Development Alliance,” and the resource that RDA wants is unobtanium — a room-temperature semiconductor that only exists on Pandora.

To get the resource, the company avails itself of two bedrock concepts in empire-building: development and alliance. It comforts the public and the shareholders on Earth to know that what they bring to the colonized savages on Pandora involves both partnership and progress.

Indeed, there’s a scene where the RDA representative bemoans the lack of gratitude and cooperation from the indigenous people. “We build them schools and teach them English … give them medicine … roads! But they prefer mud.”

On today’s Earth, in contrast, when oil companies tear through jungle, desert and tundra in search of oil, they don’t trouble themselves with the natives, much less bother to teach them English. Martin Boorman’s Emerald Forest captured this all too well.

So why bother to teach the Na’vi English, when the profit motive demands they be killed or moved elsewhere?

Back on Earth, Obama’s Secretary of Education Arne Duncan explains why education is so vital: “There’s a real sense of economic imperative. We have to educate our way [to] a better economy.”

Perish the thought that education should have a social imperative. These days, its function is to make money.

So it is on Pandora. The original reason the Na’vi are being taught English is so that they can work in the mines for RDA. It’s far too expensive to blast humans four light years across space to a place where they’ll perish quickly without oxygen. When there’s the making of a local workforce right there, the economics speak for themselves. Hence the need to forge an alliance, even if through the barrel of a gun.

Although analogies have been made with Native conquest, the Avatar that was never made is far more interesting, blending the economics of conquest with the imperatives of the slave trade and the concept of the modern developmental state. Sadly, all we see is a thin Pocahontas in Space, ably satirized by South Park in the episode “Dances With Smurfs.”

Having a clearer back story might have left audiences readier for action after recycling their 3-D glasses and leaving the theater. Fan forums are overflowing with tales of depression and hopelessness about our planet’s prospects. The movie ends with humans kicked out of paradise to “return to their dying world.” Stumbling out into a bleak parking lot after having been surrounded by so much green, it’s hard not to feel that happiness might be more easily found in space than on Earth.

Certainly, the physical wrench from blue-green moon to buttery multiplex isn’t easy. We learn in the scriptment that the Na’vi have a Commons, a public space where all of The People can talk.

There’s no such free speech in a multiplex. There is, however, always space for resistance. Avatar provides a language to explain the voraciousness of a system we’re currently living in, and a chance to point to resistance that thrives right here on Earth. It’s an opportunity to talk to everyday folk about the need for change in ways that use a common language.

Like Octavia Butler, I’ve always thought science fiction’s virtues lie not in the future it foretells, but in the present it diagnoses and the prescriptions we might imagine together. So, if you’re feeling blue after watching Avatar, consider these words, which end Butler’s essay “Positive Obsession”:

“But still I’m asked, what good is science fiction to Black people?

“What good is any form of literature to Black people?

“What good is science fiction’s thinking about the present, the future, and the past? What good is its tendency to warn or to consider alternative ways of thinking and doing? What good is its examination of the possible effects of science and technology, or social organization and political direction? At its best, science fiction stimulates imagination and creativity. It gets reader and writer off the beaten track, off the narrow, narrow footpath of what ‘everyone’ is saying, doing, thinking — whoever ‘everyone’ happens to be this year.

“And what good is all this to Black people?”

Raj Patel is a writer, activist and academic. His recent books include The Value of Nothing and Stuffed and Starved.