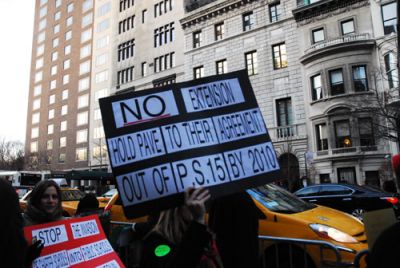 For all my anger, I do not believe that Mayor Bloomberg and his fellow billionaires are acting maliciously when they close public schools and replace them with charter schools.

These billionaires walk into charter schools and they say to themselves, “Oh my God, black and brown kids can learn?” They see black faces, and based the negative stereotypes that they viewed in their lives, the fact that minority students can excel at all seems a miracle. But, how much time did they ever spend in a neighborhood like East New York or Harlem? Probably no more than a matter of hours. They leave a charter school feeling exuberant, as if they had discovered something that the rest of society somehow overlooked.

However, it is not the new paint of charter schools, nor the potpourri they put in bathrooms, nor the new teachers whose energy and fortitude is burnt out within a few years. The secret of it all is the top-level students that they entice from our public schools — the core group of students in every grade level of every neighborhood that excels — those that become surgeons and engineers and lawyers.

The more years I spend as a teacher dealing with kids, the more I’m convinced that kids and adults are very much the same … people are followers. When you take the top students from district schools, you are in essence removing the positive role models of students who need that extra push to say, “Hey, this is what I should strive for.” You are removing from a neighborhood the student leaders, the positive middle class and professionals that offer a growing child an alternative to the gloom and doom of gangs, drugs, teenage pregnancy and high dropout rates.

The main argument for closing a public high school is that less than 50 percent of the students graduate in four years. But why do so many people assume that a high school diploma in four years is so much greater than one attained in five years? Do corporate interviewers ask a college graduate whether she or he took five or six years to get a degree? If a student in our public school system survives in shelters and foster homes and struggles to attain a high school diploma in five years — doesn’t that student deserve more credit than one who was expected to graduate and go to college in four years? Doesn’t she or he show even more character, drive and potential than a Bloomberg?

Seung Ok is a living environment teacher at William H. Maxwell High School in Brooklyn, which is scheduled to be phased out starting in September.