After more than half a century of intransigent injustice, the Palestine/Israel “conflict”—or “disaster,” or whatever you want to call it—only seems to get worse. In the last few years, Israel has pummeled both Lebanon and the Gaza Strip with devastating impunity and, especially in the Strip, forcibly prevented its victims from making any kind of meaningful recovery. Meanwhile, pro-Palestinian activism in Israeli civil society is reportedly on the decline. But, in one of a series of events since returning from the partly-thwarted Gaza Freedom March, a group of activists spoke of their experiences on Thursday at Judson Memorial Church in Greenwich Village, telling a packed room of more than 200 people, “We are here to celebrate an achievement.” 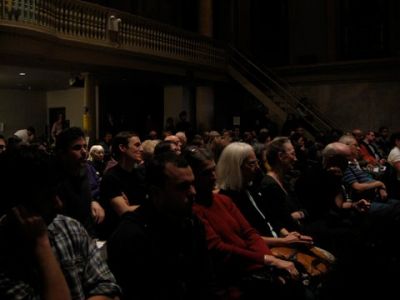 The Egyptian government didn’t let most of the over 1,300 protesters from around the world into Gaza for the planned march, but those at Judson said that they witnessed a new stage in the emergence of a global movement, facilitated by the Internet, that may well be poised to end the international support that makes Israel’s policies possible. The linchpin of the movement, the Cairo Declaration of the Gaza Freedom March, was drafted by would-be marchers while they waited in Egypt. It includes commitments to:

The Declaration also calls for comprehensive boycott, divestment, and sanctions against Israel and the interests that enable its occupation. 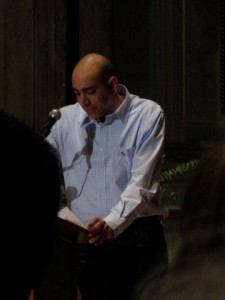 Ali Abunimah, founder of the Electronic Intifada and author of One Country: A Bold Proposal to End the Israeli-Palestinian Conflict, outlined the dire situation in the Gaza Strip and the prospects for active, nonviolent resistance. The present crisis began with an American-supported Israeli campaign for regime change, after Hamas was fairly and legally elected in a 2006 election. Of the 100,000 Gazans made homeless by Israel’s 2008 attack, more than 20,000 remain so today. People wait weeks to enter or leave the Strip, and many die because they are unable to receive necessary medical care. The area’s agricultural capacity has been reduced to almost nothing, and 90 percent of Gazans suffer daily electricity blackouts. He stressed that the war against the Gaza Strip is a war against children, as 52 percent of people there are under 18.

Egyptians, Abunimah says, have taken a lead in pressuring their government—which utterly depends on U.S. aid—to end its collusion with the blockade, and they do so at great risk to themselves. They need the support of a mass movement, one that reaches as far as does the web of money and power which props up Israel’s policies. A turning point is being reached; widespread criticism, fueled by civil disobedience, is beginning to render Israeli claims to be a liberal democracy illegitimate. An article about Israel’s Haiti response in yesterday’s New York Times suggests that the bad press is beginning to sink in there:

“Israelis are caught in a great confusion over themselves,” noted Uri Dromi, a commentator who used to be a government spokesman. “There is such a gap between what we can do in so many fields and the failure we feel trapped in with the Palestinians. There’s nostalgia for the time when we were the darlings of the world, and the Haiti relief effort allows us to remember that feeling and say, you see we are not as bad as you think.”

“Now They Love Us,” was the headline Wednesday on the column of Eitan Haber, a close aide to Prime Minister Yitzhak Rabin in the 1990s and a Yediot columnist. “In another month or two, nobody will remember the good deeds” of Israeli soldiers, he wrote. “The very same countries and very same leaders who are currently lauding the State of Israel will order their representatives to vote against it at the United Nations, proceed to condemn I.D.F. operations in Gaza, and again slam its foreign minister.”

Michael Ratner, president of the Center for Constitutional Rights and a participant in the March, echoed this. “The Israelis,” he said, “have trouble knowing what to do with straight civil disobedience that they can’t label as ‘terrorism.’” He also gave a moving account of life in the West Bank—where he and others went after being unable to get into Gaza. It is “the world’s biggest jail,” built according to a deliberate “architecture of apartheid” meant to ensure that even a “two-state solution” will be indistinguishable from occupation. The language of “apartheid” has become common among pro-Palestinian voices, from Jimmy Carter to the South African delegation at the March. 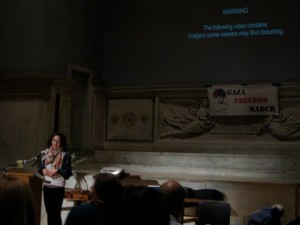 There was a lot of gray hair in the audience at Judson, but one of the speakers showed that the future of the movement is in good hands. Jenna Bitar is a high school senior in New York City who joined the March with her mother and brother. She still has braces on her teeth, but her speech was bold and eloquent, with stories of her success fooling the Egyptian police and of the violence she witnessed on the streets of Cairo and the Gaza Strip. The task, for her, was “to make some noise” for all the world to hear.

The cause for optimism was evident just in the number of organizations that hosted the event and which got the chance to speak briefly of their work at the end. Each offered different ways for people to get involved. You can boycott Motorola and Ahava products. You can support the Free Gaza boat trips that try to break the blockade. And you can find more information, organizations, and resources at the Palestine Freedom Project.

As this movement grows in the international community, it is vital that the interests of Palestinian—and Israeli—people remain at the center of it. The goal of a nonviolent movement should be to enlist Israelis as partners in a just solution, making them see it as in their interest to do so. But until they do, the movement needs to ensure that they, and the rest of the world, can no longer afford to be blind to the injustice that goes on daily in the occupied territories.

Peace will not come until Palestinians enjoy the rights that they deserve, not simply the pittances Israel has so far offered to provide. At Judson, the Gazan filmmaker Fida Qishta reminded us that, for her people, humanitarian aid isn’t enough. “We don’t need food, and we don’t want money,” her friends back home insisted that she say to the world. “We need to be free.” She showed haunting footage of the post-attack devastation in Gaza: demolished buildings, unexploded bombs lying in houses, and teenagers with shrapnel in their bloody bodies.

“I want to be human, and I want to be myself,” Qishta said, together with the one and a half million on the other side of the blockade.

This article originally appeared on WagingNonviolence.org on Jan. 23.