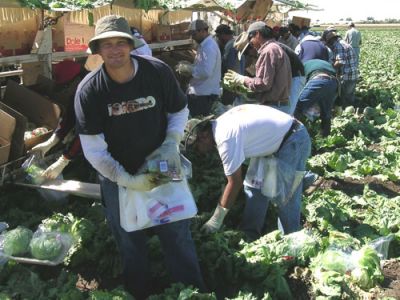 Yet somehow this fact has been kept out of our country’s debate on immigration reform. Programs have been proposed, logistics debated, immigrants’ “worthiness” of citizenship argued for and against, but rarely has the conversation delved into the real conditions of immigrants’ lives and jobs in the United States.

Investigative journalist Gabriel Thompson hopes to change that. In his newly released book, Working in the Shadows (Nation Books), he goes undercover to work alongside immigrant laborers across the country to reveal what transpires in these jobs in the shadows.

Micah Williams: You say in the beginning of the book that unlike similar past experiments, like Nickel and Dimed by Barbara Ehrenreich where the goal is to survive financially in low-wage service sector jobs, you’re just trying to survive physically. How did you do?

Gabriel Thompson: I did it as well as I hoped to. I will go to my grave with my surviving two months in the lettuce fields as one of my proudest physical accomplishments in my life. Everyone can assume that farm work would be incredibly difficult, but to actually get up each morning at 5:30 A.M. and go through these long days of individually harvesting up to 3,000 heads gives you a different perspective.

MW: Anti-immigration activists charge Mexican immigrants with taking the jobs of U.S. citizens, but at your first job cutting lettuce in Arizona, you had to battle to get hired because you’re Anglo — despite their labor shortage, the company only wants Mexicans. How would you stack up anti-immigrant claims about immigrants’ effects on the economy versus your experiences working these jobs?

GT: In each job, I came in with zero experience. And in each one, I was hired right away. I think it would be very educational for the people who are screaming about jobs being taken by immigrants to spend a week, or even an hour, doing these jobs — there isn’t much competition for such work right now. Anti-immigrant activists could go in there and steal some of those jobs back, if they really wanted to.

Part of the reason I chose Russellville, Ala., was their recent Ku Klux Klan march through downtown. I wanted to see not only what the work was like at the chicken plant, but also how locals were reacting to immigrants’ presence in a poor, rural, static town where there was a huge number of people who looked and spoke differently. I was expecting to find a lot of tension, but there was surprisingly little. This is partly because there wasn’t anyone taking jobs from anyone else. I showed up totally out of place and with no experience, and within a week I had a job there. On the plant floor and in town, no one thinks, “The immigrants shouldn’t be here because they’re taking all our chicken plant work.” What they are thinking is, “These immigrants are here because people can’t last in this awful work.” If you did a news search of Russellville, the KKK march would pop up, but you wouldn’t hear about how people are largely getting along, because that’s not a news story.

MW: May 1, 2006, is known for massive immigrant rights marches in large cities like Chicago and Los Angeles, but you say the impact in small towns like Russellville, Ala., was “more profound.” What happened?

GT: In Russellville, the immigration drama had been playing out very quietly. There were more immigrants coming in, and people knew that, but immigrants lived in trailers outside of town and near the [chicken] plant, segregated from the rest of the community. Locals had said, “We know immigrants are here, but as long as they’re scared and aren’t fighting, we’ll deal with them.” People saw the first marches in April on TV and thought that it was something that would never happen in Russellville. Then a few days later, in a pretty spontaneous protest, 500 immigrants marched through downtown. That was an earth-shattering moment for the town. They saw hundreds of immigrants marching, unafraid to assert their rights. People became scared and angry, because these immigrants were not acting like they were supposed to. There was a lot of fear and uncertainty, but it was a necessary moment for locals to be confronted with immigrants’ presence.

MW: Your description of the chicken processing plant is jaw dropping. You write that in 30 minutes, you[JS2]  unload almost 2,000 pounds of chicken, leaving your muscles burning, your feet are soaked in chicken blood and your flimsy protective gear is in shreds. How do people work under these conditions every day for years?

GT: Few people do this work for long. It has become so deskilled — much of it entails standing in one place doing very repetitive motions. If you’re on the debone line, you could be making a cut over and over again, up to 18,000 times in a single shift. You can start going crazy after that. Most people don’t work in these conditions for years. Turnover is huge. In one week, the plant hired 150 new people, but it wasn’t enough, because 175 people quit.

There are people who do it for a long time — five or six years. Many of the immigrants who have stuck it out have come from a much worse place. The Guatemalans I worked with had escaped persecution during their civil war. They had come from something really horrible, and they were now enduring something less horrible in the chicken plant. 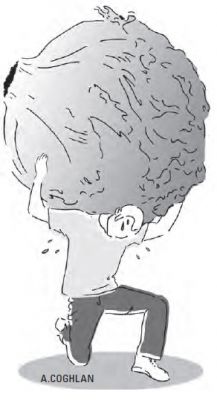 MW: The injury rates for these jobs are astronomical. Perhaps the most astounding statistic in the book is that the average farm worker’s life expectancy in the United States is 49 — equal to the average citizen of Somalia. Is it even possible to envision lettuce cutting or chicken processing as humane, decent jobs?

GT: Farm work is always going to be very labor-intensive. If you were being paid a fair wage, that would go a long ways towards making it more tolerable. But the way chicken plant work is structured is part of a bigger problem: a drive to make things as cheap as possible. One of the only costs plant owners can really control is labor, so they try to squeeze as much as they can from their workforce.

To improve the work, we need much more vigorous government enforcement and union organizing. Organizers need to be more thoughtful in how they build a union and how they recruit workers who are diverse. But the expectations of how much output a worker generates must be changed. You can have a union, but if you’re still making 18,000 cuts per shift, you’ll still have serious health problems.

One reason these arrangements persist is that companies work hard to ensure people don’t have behind-the-scenes access to these jobs. When people think of chicken, they think of a KFC commercial; they don’t think of a worker tearing apart 7,000 chicken breasts by hand in one shift. That’s one of the main motivating factors in doing this book: a sheer sense of curiosity of what it’s like to do these jobs. The chicken plant fired me immediately upon learning that I was a journalist. This says something about their perspective: the less people know about where their food comes from, the better, because exposing these conditions doesn’t paint them in a favorable light.

MW: You are offered three promotions throughout the year — one after saying only “hello” — ostensibly because you’re white. How does racism figure into the structure of these industries?

GT: These are jobs where the industry has always relied on people who they view as marginal. In chicken processing, before immigrants, African Americans largely did the work (and still do). So these were not once great middle class jobs whose standards declined after immigrants came — these jobs have always depended on marginalized people.

In certain industries, it’s not exactly racism, it’s that these are industries where employers are looking to find the most desperate people. There are two options for these industries: they can be organized and standards can be raised, or the different companies can be pitted against each other, unfettered, to get things as cheap as possible. Right now, we’re at the second option. I worked with Mexicans, Guatemalans, whites and African Americans at the chicken plant; they all were being exploited in the same way. They all earned the same amount and dealt with similar workplace problems.

MW: You encounter immense poverty in Alabama — in assessing the toll chicken processing has taken on your co-workers, you say you feel like you have “been transported back to the harsh frontier life of the early 1800s.”

GT: Alabama blew me away. When I worked as a tenant organizer in New York City, I organized tenants in some really terrible buildings — rats running around, kids with lead poisoning — but there was this incredible sense of camaraderie. Folks lived next to each other, so they commiserated and built some solidarity around that. Russellville, on the other hand, is very isolated. People feel very disconnected in the midst of extremely hard, impoverished lives. Just about anyone over 40 at the chicken plant is missing front teeth, and have very tired faces. There are so few opportunities to advance in places like Russellville — the main work opportunities are Wal-Mart and the chicken plant. There was a real sense that people who were born there were going to live and die there.

MW: Rep. Luis Gutierrez (D-IL) is currently pushing his bill for comprehensive immigration reform. How would this legislation change the jobs you worked in?

GT: It could only be positive. Anti-immigrant people say, “We want to be tough on immigrants who have broken the law,” but the situation right now is actually also very hard on low-wage U.S. workers. These jobs really need to be improved, and that won’t happen without worker activism. As long as you have a large number of workers who feel less confident about speaking up, highlighting abuses, taking on bosses, or getting involved in organizing campaigns because of their immigration status, those industries are going to stay very unhealthy for the workers who are there. That impacts U.S. citizens. Comprehensive immigration reform would be very good for undocumented immigrants, but would also benefit the low-wage U.S. citizens who are working shoulder-to-shoulder with them.

MW: You’ve worked as a housing organizer and a union researcher. After working these jobs and writing the book, what lessons did you learn for organizing immigrant communities?

GT: Over the year, it was very inspiring to see that no matter how bad these jobs were, there was a great deal of natural worker solidarity. That shows the likelihood of union organizing in places we formerly thought it impossible. Also, when U.S. citizens and non-citizens work side-by-side, the barriers to organizing begin to come down. Sometimes it could just be that they both had a supervisor who won’t let them go to the bathroom, and that can cause a bond between workers who might not necessarily be partners. Those two aspects are very promising.

Additionally, these industries can’t be organized without unions having a plan for addressing immigrant workers’ issues. You can’t pretend these are small differences. I asked the guy who organized the Russellville immigrant march — the largest in the town’s history — about his involvement in a past organizing drive at the chicken plant. He said he wasn’t involved because he didn’t have much contact with the union organizers. So any drives that are going to work are really going to have to have strategies for engaging the workers who are leaders.

Micah Williams has written for In These Times, Z Magazine and Dissident Voice. He lives in Chicago.