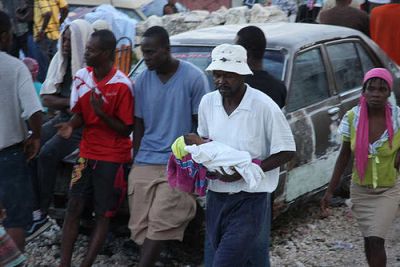 President Obama promised $100 million in aid to Haiti on Jan. 14, 2009. A Kentucky couple won $128 million in a
Powerball lottery on Dec. 24, 2009. The richest nation in the history of the world is giving Powerball money
to a neighbor with tens of thousands of deaths already?

Point Two: Have You Ever Been Without Water?

Hundreds of thousands of people in Haiti have had no access to clean water since the quake hit. Have you ever been in a place that has no water? Have you ever felt the raw fear in the gut when you are not sure where your next drink of water is going to come from? People can live without food for a long time. Without water? A very short time. In hot conditions people can become dehydrated in an hour. Lack of water puts you into shock and starts breaking down the body right away. People can die within hours if they are exposed to heat without water.

Point Three: Half the People in Haiti are Kids and They Were Hungry Before the Quake

Over half the population of Haiti is 15 years old or younger. And they were hungry before the quake. A great friend, Pere Jean-Juste, explained to me that most of the people of Haiti wake every day not knowing how they will eat dinner that day.  So there are no reserves, no soup kitchens, no pantries, nothing for most. Hunger started immediately.

Point Four: A Toxic Stew of Death is Brewing

Take hundreds of thousands of people. Shock them with a major earthquake and dozens of aftershocks. Take away their homes and put them out in the open. Take away all water and food and medical care. Sit them out in the open for days with scorching temperatures. Surround them with tens of thousands of decaying bodies. People have to drink. So they are drinking bad water. They are getting sick. There is no place to go. What happens next?

Point Five: Aid is Sitting at the Airport

While millions suffer, humanitarian aid is sitting at the Port au Prince airport. Why? People are afraid to give it out for fear of provoking riots. Which is worse?

Point Six: Haiti is Facing A Crisis Beyond Our Worst Nightmares

“I think it is going to be worse than anyone still understands,” Richard Dubin, vice president of Haiti shipping lines told The New York Times. He is so right. Unless there is a major urgent change in the global response, the world may look back and envy those tens of thousands who died in the quake. Wake up world!

Bill Quigley is Legal Director at the Center for Constitutional Rights and a long-time human rights advocate in Haiti.