Articles and blogs are flooding the web, summarizing and dissecting the opening Financial Crisis Inquiry Commission‘s chat with the four CEOs presiding over the strongest (read: luckiest recipients of federal generosity during their most troubled times) banks in the country: Lloyd Blankfein from Goldman Sachs, Jamie Dimon from JPM Chase, John Mack from Morgan Stanley and Brian Moynihan from Bank of America. (Citigroup didn’t make the cut.)

But, Wednesday morning was an exercise in how prepped bankers can deflect less-prepped commissioners’ questions with seriously delivered circular reasoning. And, it was exasperating. (Les Leopold, author of The Looting of America, provides an excellent, detailed play-by-play of the morning’s events.) 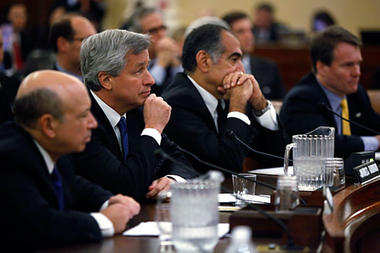 I have been writing about reinstating Glass-Steagall since I left banking in 2002. I explored how findings from the Pecora commission, which investigated the most risky bank practices during the early 1930s, contributed to the creation of a more restrained banking landscape, in which commercial banks take less risk and receive government support, and investment banks take more and get zilch.

So far, it’s clear; we’re not going down that road with this commission.

The CEOs punted every single question on anything that mattered in terms of the link between their practices and the crisis (the entire point of the commission). They deflected questions on leverage, trading revenue breakdowns, and on the amount of standard OTC derivatives (over-the-counter; think generic pharmaceuticals) vs. non-standard ones (which the bankers referred to as ‘bespoke,’ basically tailored—think expensive exotic pharmaceuticals). The equivalent of the-dog-ate-my-homework excuse was given no reprimand, just a polite, okay, well, get back to us when you have that information.

You could cast blame, share blame, whatever. But, the reason some banks went bankrupt and some almost did, once you wipe away all the complex lingo, was that they didn’t have enough money (capital) to back their bets (complex securities stuffed with various mixes of mortgage loans, packages of loans and credit derivatives). This should be the crux of the commission’s investigation. How did that happen, who did it, how can we make sure it won’t happen again? Show us your numbers first, then we’ll talk.

When you are out at sea, drowning and someone throws you a life raft that gets you back to shore safely, you survive—and perhaps for that moment, you don’t even need the life raft anymore. But, if you don’t even get the life raft, you die. That is the simple difference between those CEOs and their firms, vs. much of the rest of the population.

At one point, Goldman had the help of $53.4 billion of federal money, not counting anything received through the Fed’s discount window or other loan facilities for which the Fed will not disclose details, Judicial decisions to do so notwithstanding. JPM Chase got $99.8 billion including the government subsidizing its acquisition of Bear Stearns and WAMU (mergers not brought up by the commission). Bank of America received $228.4 billion including its merger with Merrill Lynch (not brought up), and Morgan Stanley was handed $36.2 billion.

This simple fact should have been drilled down through every question of this commission’s inquiry. You got the goods, now admit it. How did you use the money you got? Don’t dodge the questions. Tell us. Specifically.

In his opening statement, Commission Chairman Phil Angelides, reassured us he would “examine the causes of the financial and economic crisis that has gripped this country and to report our findings to the Congress, the president, and the American people.” He said the “law which created the commission calls on us to determine the causes of this crisis… and we must move as quickly as we can in fulfilling our duties.”

This commission, appointed last summer, runs on a budget of $8 million, and is still in the process of staffing up. The FCIC website was set up at the last minute. Probing questions, however didn’t make the “six-month preparation time” quick list.

As a result, all we got was a friendly show of collaboration: What do you think should be done about compensation? What do you think was the role of risk? Do you think derivatives played a role? Indeed, Goldman CEO Lloyd Blankfein said that derivatives did better during the crisis than “we had a right to expect.” No one even interrupted him with a WHAT? REALLY? WHAT?

Rather, questions had less teeth than any police or federal agent inquisition over simple daily crimes—they existed, but in a tepid format. It was sadly clear from their questions that the Financial Crisis Inquiry Committee has no clear idea what constitutes bank risk, or banking for that matter, and the CEOs are dancing rings around them. Notice how none of them advocated reducing their reliance on government subsidies, or splitting themselves up into risky vs. non-risky entities. Indeed, when Blankfein was asked a related question, he said that if there was a repeat crisis, he assumed the government would step in given the “fragility” of the system. That says it all. We might as well just watch The Bachelor rather than waste time with this; it’s equally vacuous, but has a slightly higher chance of a conclusive outcome.

When a child gets the runaround, his or her follow-up is “Why?”

We don’t have those leverage figures handy.

We don’t know how many of our derivatives positions are standard vs. customized.

We don’t have the details of our trading revenues.

We would still underwrite distressed exposure because that’s what our investors want (the same thing that the banks did to pump up the mortgage securities crisis).

The second panel—consisting of Michael Mayo, Managing Director and Financial Services Analyst, Calyon Securities; J. Kyle Bass, Managing Partner, Hayman Advisors; and Peter J. Solomon, Founder and Chairman, Peter J. Solomon Company—gave some really good information. In fact, the whole exercise would have been far more useful and efficient if that panel got to question the CEOs while the commission took notes.

It was almost embarrassing to watch this discourse, questions without content to back them, so lacking in probing value. A prosecutor trying a street case has more information going into questioning, even if some of it is fabricated, or based on self-interested “witnesses.” Plus, prosecutors are certainly more intimidating. And, if someone gets caught with a vial of crack, or was sitting next to someone with a vial of crack, they can’t just say sorry, I made a mistake, it won’t happen again, I learned my lesson, and get off.

Yet this is exactly what Jamie Dimon said in front of the commission: “While we were able to withstand the crisis and I believe emerge as a stronger institution, we, like many others, made mistakes. As always, we try to learn from them.”

In the real world, that crack vial leads to a sentence and a record that constrains the defendant from ever getting a decent job again. On Wall Street John Thain, whose firm Merrill Lynch was brokered by the government into a merger with Bank of America (and had the nerve to recommend himself for a $10 million bonus), is being considered to take over the top slot at CIT Group.

A crack user with a record doesn’t get trillions of dollars of government subsidies to get back on his feet, or a single dollar for that matter. These CEOs’ firms get billions and the chance to say “I’m sorry, I really do believe in tighter regulation, my lobbyists misunderstood me.” On top of that, they retain the profits from those subsidies, minus some slight interest payments. Why isn’t the committee questioning that discrepancy perspective? Not a single number relating to the benefits those firms received came up.

I’ve written about how people should communicate their thoughts with their congressperson, and yes, it’s important to let them know when they are not taking their public responsibility seriously. I have written about joining groups like Americans for Financial Reform. But, like many of you, I constantly question how much good this does. Especially while watching these four guys dodge, yammer in complex jargon, and leave Room 1100 of the Longworth House Office Building, in Washington, D.C, with nary a bead of sweat on their brows. To quote Howard Beale in the classic 1976 movie, Network, I’m mad as hell.

I’m mad as hell that the first day of questioning the bank CEOs had no pulse. These people drove their firms (or took over said firms) over an abyss, saved only by tremendous federal financial intervention. They should be smacked down and disciplined. How about starting questioning with this: “Give me one good reason why you should continue business as usual on our dime? And why I should believe anything you say?”

(And for the record, if it were my commission, I would have asked for all the trading, derivatives and leverage information before anyone arrived.)

If you feel the same, tell people! Not just Congress, but your neighbors, your friends, the people who already share your sentiments, and the ones who don’t. Get angrier together. Instead of commenting on this piece, send your comment to the commission in its purest, angriest form. They want us to provide questions. How about we start each question, with anger right here.

Nomi Prins is a senior fellow at the public policy center Demos and author of It Takes a Pillage: Behind the Bailouts, Bonuses, and Backroom Deals from Washington to Wall Street (Wiley, 2009).

This article originally appeared on Jan. 14 on AlterNet.