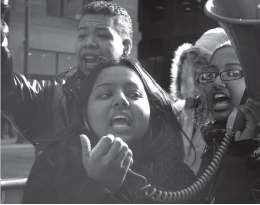 Chanting “MTA we won’t pay,” 150 New York City school students rallied outside MTA (Metropolitan Transit Authority) headquarters on Feb. 1 along with members of Transit Workers Union Local 100 and a number of local elected officials. The demonstrators called on the transit authority to cancel its proposed plan to eliminate free or discounted Metro Cards for 585,000 students.

Under the MTA’s plan, students would be charged half-fares starting in September of this year and full fares beginning in September 2011. The fare hikes would cost families with children who use mass transit to travel to school about $800 per year, per student, and could reduce the opportunity for less well-off students to attend schools outside their neighborhood district.

The MTA faces an operating deficit of almost $800 million in 2010 due in part to cuts in state assistance.

Mayor Michael Bloomberg has called the elimination of free student MetroCards “unconscionable.” However, others question the priorities of the mayor and the MTA, which is continuing to build the $2.1 billion extension of the 7 train to the far west side of Manhattan at the behest of Bloomberg. The city is providing much of the financing for the project.

“The MTA’s going belly up and the most important thing we can do is save the free student MetroCards,” Assemblymember Richard Brodsky (D-Westchester), chair of the Authorities Committee, told Metro Feb. 4. “And some of that money is now going to build half a train line.”

The MTA will hold public hearings on the fare changes and proposed service reductions during the first week of March. All hearings begin at 6 p.m.

Opponents of the student fare hikes will also take their concerns into the streets on March 4. On that day, supporters of public education will be holding demonstrations across the country to protest budget cuts at public schools and universities. In New York, protesters will rally at Gov. David Paterson’s Manhattan office and then march to MTA headquarters. For more, see defendeducation.org.