Here’s a sobering fact on World Water Day: Coal-fired power plants use approximately 1.5 trillion gallons of water a year in the US.

In many respects, some folks might use more water flicking on their lights, than chugging back a glass of that wondrous stuff.

Makes you wonder: Has the EPA ever tabulated the external costs of coal on our water resources?

And then, after that refreshing drink of desperately needed water, the 600-odd coal-fired plants (the EIA actually reports 1,445 coal-fired generators) typically throw up their chemically enhanced processed wastewater into our rivers and waterways, poisoning our own drinking water.

According to a recent analysis of EPA data, the NY Times concluded:

“Power plants are the nation’s biggest producer of toxic waste, surpassing industries like plastic and paint manufacturing and chemical plants.”

But the cleaner air has come at a cost. Each day since the equipment was switched on in June, the company has dumped tens of thousands of gallons of wastewater containing chemicals from the scrubbing process into the Monongahela River, which provides drinking water to 350,000 people and flows into Pittsburgh, 40 miles to the north.

“It’s like they decided to spare us having to breathe in these poisons, but now we have to drink them instead,” said Philip Coleman, who lives about 15 miles from the plant and has asked a state judge to toughen the facility’s pollution regulations. “We can’t escape.”

Even as a growing number of coal-burning power plants around the nation have moved to reduce their air emissions, many of them are creating another problem: water pollution.

Not that the coal industry hasn’t already fouled our headwaters and waterways through strip-mining and underground mining pollution. As the NY Times reported in their amazing “Toxic Waters” series, communities across the coalfields of Appalachia do not have access to drinking water, due to the contamination of their watersheds and wells from coal slurry.

Mountaintop removal mining alone has destroyed over 2,000 miles of streams and waterways in Appalachia–given that strip-mining takes place in over 20 states, feel free to extrapolate the impact of this devastating mining process and legally permitted toxic discharges to watersheds and streams for thousands of communities across the nation.

(On the northern Arizona reservations, Peabody Energy pumped out an estimated one billion gallons of scarce water per year to operate its slurry operations at the Black Mesa strip mine–which was recently denied a life-of-mine permit.)

In the meantime, underground longwall mining–the reckless process of removing pillars from underground mines and allowing for massive subsidence–is plundering the water sources in the farm belt of Illinois, and across coal states like Pennsylvania and West Virginia.

Peruse these stats as you drink today:

According to the Union of Concerned Scientists:

A typical 500-megawatt coal-fired power plant draws about 2.2 billion gallons of water each year from nearby water bodies, such as lakes, rivers, or oceans, to create steam for turning its turbines. This is enough water to support a city of approximately 250,000 people.

And here’s a graph of water violations from coal-fired plants in eastern and Midwestern states, based on the NY Times analysis of the EPA data: 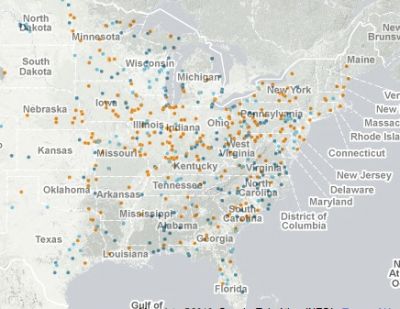