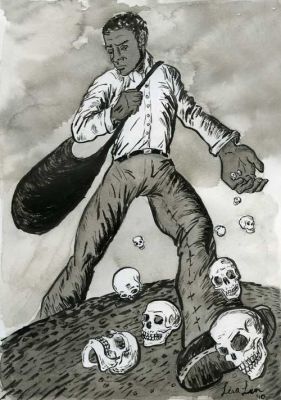 Recent mainstream media coverage of a new anti-abortion campaign aimed at Black audiences neglected to mention a leading expert on the topic. Many of the billboards erected by the largely white group, Georgia Right to Life, were in the backyard of Loretta J. Ross, who is the national coordinator of SisterSong, Women of Color Reproductive Justice Collective, headquartered in Atlanta. She was National Co-Director of the 2004 March for Women’s Lives in Washington D.C., the largest protest march in history.

Below is an excerpt of an article by Ross titled “Re-Enslaving African American Women,” which appeared in the Fall 2008 edition of On The Issues magazine.

The Black anti-abortion movement needs to be taken seriously. The people involved in it carefully exploit religious values to make inroads into our communities. They poison the soil in which we must toil …

Who are these people in the Black anti-abortion movement? This movement needs to be carefully studied through opposition research. Information on them, their connections to white anti-abortion groups and their sources of funding is scant.

Of course, the most famous of the Black anti-abortionists is Alveda King, niece of Dr. Martin Luther King, Jr. She is a pastoral associate, a member of the avid anti-abortion group Priests for Life, and director of African American Outreach for the Gospel of Life Ministries. Because her father was Dr. King’s brother, Alveda is the leading voice for linking the anti-abortionists to the Civil Rights movement. This is despite the fact that both Martin Luther King and Coretta Scott King were strong supporters of family planning in general, and Planned Parenthood in particular. Alveda King, who lives in Atlanta, has also spoken out strongly against gay rights and in support of charter schools.

A widely known Black anti-abortion minister is Rev. Clenard H. Childress of New Jersey, founder of the BlackGenocide.org project and website. He is the president of the Northeast Chapter of Life Education and Resource Network (L.E.A.R.N.), established in 1993. He claims that the “high rate of abortion has decimated the Black family and destroyed Black neighborhoods to the detriment of society at large.” He led protests at the 2008 NAACP convention in Cincinnati and has accused the organization of practicing racism against Black children. He is also on the board of the Center for Bio-Ethical Reform, which circulates the Genocide Awareness Project.

Alan Keyes, perennial presidential candidate, is also well known in anti-abortion circles. Keyes first came to national attention when President Reagan appointed him as adviser to Maureen Reagan (daughter of the president), as she led the official U.S. delegation to the U.N. World Conference for Women in Kenya in 1985. At this meeting, the United States affirmed its support for the infamous 1984 “Mexico City” policy that banned U.S. funds from supporting abortion worldwide. Keyes helped lead the antiabortion protests at the 2008 Democratic National Convention in Denver and is a favorite of the right for his extreme views on a number of issues.

There are a handful of other Black spokespeople for the anti-abortion movement. The point is not how many there are, but the disproportionate impact they have. They have created the false impression that if only Black people were warned that abortion is genocide, women would stop having them in order to preserve the Black race, either voluntarily or by being pressured by the men in their lives.

THE SEXISM THEY SELL

The sexism in their viewpoints is mind-boggling. To them, Black women are the poor dupes of the abortion rights movement, lacking agency and decision-making of our own. In fact, this is a reassertion of Black male supremacy over the self-determination of women. It doesn’t matter whether it is from the lips of a man or a woman. It is about re-enslaving Black women by making us breeders for someone else’s cause.

We need our leading African American women’s and Civil Rights organizations to speak out more strongly in support of reproductive justice. We need to organize young people to resist the misinformation directed at them by these groups. Many of our campuses are unaware of the activities of the Black anti-abortionists until they show up, usually invited by a white antiabortion group.

But mostly, we need to let the world know that they do not speak for Black women. As my mother would say, “they might be our color, but they are not our kind.”