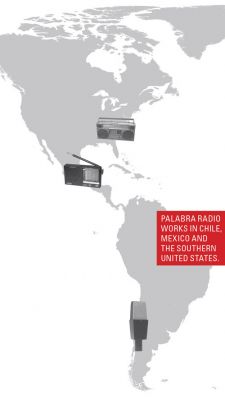 People across Latin America and the United States are increasingly turning to community media as a tool of resistance. Examples include women in Oaxaca, Mexico, who led a take-over of corporate and state media outlets amid their media blackout of a popular rebellion, and the Coalition of Immokalee workers station Radio Conciencia that broadcasts details about farm workers rights to migrant laborers in Florida.

Maka Muñoz, a Latin American radio activist and co-founder of Palabra Radio, plans to use these examples in a cross-country tour to grow Spanish language, participatory radio in immigrant communities in the United States. Muñoz discussed her philosophy with Andalusia Knoll, an organizer with the Prometheus Radio Project who will join her on tour.

Andalusia Knoll: Normally people in the United States try to export their models of “development” to the “developing world.” It seems that with Palabra Radio, you are attempting to import organizing models to the United States. What do you think we have to learn from community radio in the Global South?

Maka Muñoz: It’s a good question, because it is so common in Latin America, and really all around the world, for things to come from the North to the South. Here, in the U.S. we are promoting methods of organizing, sharing experiences and specific values. These values include a focus on solidarity, cooperation and working together for a common good which are increasingly important to promote as we are in the middle of a neoliberal crisis.

We recognize that these values aren’t exclusively from the South, as the beliefs of many indigenous groups in the North are similar. Nevertheless, we believe that many of these values, and ways of organizing ourselves, have been displaced by other values imposed by a much more powerful system of consumerism and competition with its own mass media infrastructure. Right now, this system is in a grave crisis that affects us all. In order to confront the multiple barriers and problems inherent in it, we are more interested in creating a model that fits with the context and reality here as immigrants rather than importing one. 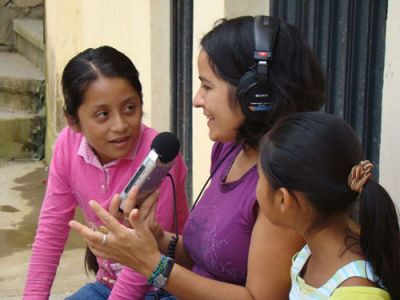 AK: Can you give us some political context for your work in both in Chile and in southern Mexico? What are the issues that people are facing and how are they organizing and what role does radio play?

MM: In South America in the 1970s, people lived under the rule of dictatorship and then in the 1980s, experienced a transition to a neoliberal system. For example, right now Chile has a stable economy, but this is because during the Pinochet dictatorship he created a constitution that focused on protecting private capital. This model has left many people without access to housing, healthcare, food, education and so on. Media appears as a new right that allows poor and marginalized people to grow community and fight for these basic rights.

In Mexico, there are many indigenous people who are denied rights in the formal economy, but they have natural resources, which the government wants to exploit. The people need to organize against these private transnational companies and use media in these struggles, as well as conserve their languages, cultures and traditions.

AK: How, more specifically, does media help people in their struggles?

MM: People need tools to help them organize themselves. Media is just that, a medium, a tool that allows organized people to amplify their message, interact and promote the use of traditional languages, cultures, traditional knowledge and the value of natural resources. Radio allows people to participate, put their voices on the air and share their different experiences on the air.

MM: It’s the same. In the case of Chile, 70 percent of the spectrum is controlled by a Spanish company, completely foreign, and licensed community radio is not accessible because all the criteria to give out licenses are technical and do not take into consideration social factors, or content. In Mexico, Televisa controls all the radio and newspapers and the people know that there is not a place for them in those media outlets, so they have to create their own media.

AK: What are some of the risks people face operating radio stations in Mexico and Chile?

MM: In Mexico, politicians want to criminalize community broadcasting. They say that community radio works for guerrilla groups or for narco-traffickers. But at the same time they are saying the problem is that community radio stations use the spectrum but don’t pay for it. They say the spectrum is private but we believe the air is free, so it is absurd to criminalize people for broadcasting. Under the law they are currently trying to pass, you could go to jail for 12 years if you “sell, install or operate unlicensed community radio equipment.” In Chile, there are people that are on trial who could face a three year jail sentence for transmitting radio without a license.

AK: Why does Palabra Radio promote the usage of open source software and hardware?

MM: We are promoting another world, and in that world, there is a free exchange of knowledge. The idea is to create sustainable projects in the long term. If we use commercial radio equipment, we will be dependent on the store we buy it from. If we use open source software and hardware, we can document the whole process of how they work and the people involved in constructing the transmitters will systematize the knowledge and be able to use and repair the equipment in the future. We believe that communication is a human right, and that people should be free to appropriate communication tools that facilitate the sharing of knowledge.

Follow the tour and learn more at palabraradio.org and prometheusradio.org.