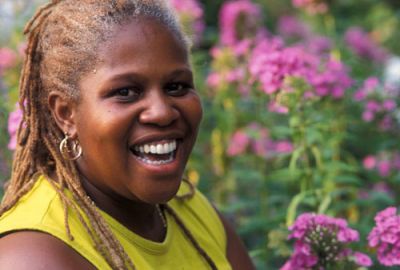 Karen Washington, a long-time food justice activist and president of the New York City Community Garden Coalition, is hard at work on her most recent project — working with a broad coalition of groups to organize New York City’s first Black Farmers and Urban Gardeners Conference at Brooklyn College this November.

The coalition raised $3,000 at a fundraising kick-off event last month and is hosting a community forum for black farmers and urban gardeners April 10. The Indypendent’s Jeff Friedrich sat down with Washington to discuss food justice, junk food and getting young people of color involved in urban farming.

Jeff Friedrich: What does food justice mean to you?

Karen Washington: Just like the Constitution says that everyone has the right to life, liberty and the pursuit of happiness, I think human beings have the right to food that is healthy, local and grown without chemicals, and I think that’s a right for every human being. However, what you see is that in terms of food that is healthy, it is predominantly available in affluent neighborhoods, whereas if you look in poor, low-income neighborhoods, the quality of the food is very poor and the food itself costs a lot more.

JF: Could you talk about the connection between health and the environment, particularly in lower-income neighborhoods?

KW: Young people are hooked on processed food. When they go to the grocery store they never stop and think about whose hands have touched that particular crop, what has been placed on it in terms of pesticides — those questions are not asked. We are starting to see the health-related problems of diabetes, heart disease and cancer. You have kids who are eight, nine, 10, who are suffering from diabetes and obesity. Twenty or 30 years ago, that was unheard of.

JF: What are the goals of the upcoming Black Farmers and Urban Gardeners Conference?

KW: We want to really try to engage people of color in this urban agriculture farm movement, because, at this point in time we’re not there — we’re far from there. We’re being talked about in terms of statistics. People mention health problems in low-income neighborhoods and people of color, but when it comes to the actual solutions, we’re not there, we’re not making the decisions that impact our community. So what we want to do for this conference is have the black community sit down, analyze exactly what’s going on and analyze what’s wrong and what’s right, so that we can be a part of what’s happening in this sustainable agriculture and urban farming movement.

KW: If we’re talking about sustainable agriculture, and I look in the audience and don’t see people that look like me or people of color, then I have to step back — and a lot of people are starting to step back — and say, “Wait a minute, there’s a group of people missing.” So now is the time to really stir up the interest that black people should have in urban agriculture and the impact that we have as consumers.

JF: Are you seeing more young people of color getting interested in food and climate change issues?

KW: No. I don’t see that. That’s part of why we’re having this conference. I still see that, for people of color, the stigma of working on the land, the stigma with slavery, is deeply entrenched in the black community, and that’s something we want to talk about. Right now, the black youth, they’re not involved in the food movement, and we need to dispel the myths that go along with farming and get them on board.

JF: In order to improve access to healthy foods in low-income neighborhoods the city recently launched the FRESH initiative (Food Retail Expansion to Support Health), which will provide financial and zoning incentives to supermarkets that locate in underserviced areas of the city. What do you think of this policy effort?

KW: Everyone should be entitled to affordable produce — I’m in agreement with that. But what I would like to see is a partnership with local organizations, because sometimes the ideas are good, but they don’t incorporate the people in the community to bring that project together. What happens is that you have these initiatives that are top-down, rather than being inclusive or bottom-up.

For more information about the Black Farmers and Urban Gardeners Conference, visit blackfarmersconf.org.