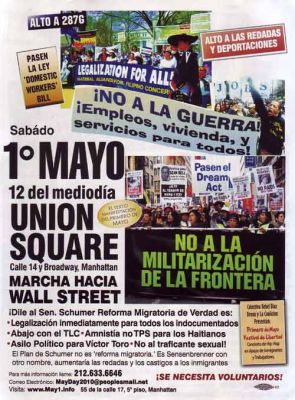 With Wall Street profits once again soaring while unemployment hovers around 10 percent, two different coalitions of labor unionists and immigrant rights groups will take to the streets of New York on May Day.

The May 1st Coalition for Worker and Immigrant Rights will rally at Union Square at noon on May 1 and march down Broadway to Wall Street. The event will feature cultural performances organized by the radical hip-hop group Rebel Diaz. A number of organizations will set up educational tables around Union Square.

Meanwhile, a couple of miles away, the Alliance for Labor and Immigrant Rights and Jobs for All will rally at Foley Square at 11 a.m. and then march around City Hall before returning to Foley Square. The Alliance is composed of more than two dozen labor union locals and several prominent immigrant rights groups. High unemployment and severe budget cuts have galvanized many of the city’s unions to take action.

“It was time [the unions] get back in the public eye,” said Kevin Pat Lynch, director of organizing and legislative affairs at RWDSU/UFCW Local 338. 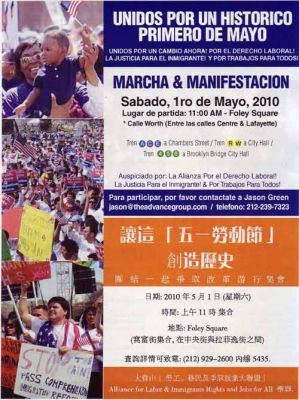 The two coalitions share similar demands around immigrant rights, jobs and defending public services but tend to approach politics differently. The groups rallying at Foley Square often work with Democratic Party allies to try and advance their goals. The May 1st Coalition, which is closely aligned with the Workers World Party, emphasizes building popular movements that operate outside the two-party system. Both coalitions hope to draw thousands but have not agreed to unite their events.

“We’ve met with them and we will continue to meet,” said Charles Jenkins of the May 1st Coalition and the Coalition of Black Trade Unionists. “I can tell you the message is the same. There is an attack on workers all around the country.”

May 1 is celebrated as International Workers Day in most of the world but not the United States.