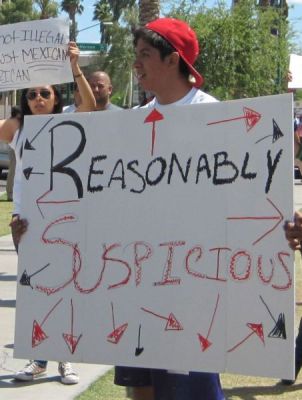 If you’re reading this from outside Arizona, you may be wondering what the heck is going on here. The political process in the desert has gone completely haywire, resulting in the adoption of openly racist laws, dehumanizing police practices and legalized harassment of marginalized groups, all in the name of deterring undocumented immigration. The most recent outrage is the passage of SB 1070, but its roots lie deep in our past.

It’s important to look at Arizona’s history to explain what’s happening here today. During the Civil War, the Confederate States annexed this southwest land and declared it a Confederate Territory. In 1861, 50 years before statehood, the “people of Arizona” passed a resolution declaring that “we cordially indorse [sic] the course pursued by the seceded Southern States.” Arizona remained part of the Confederacy until the conclusion of the war in 1865 (the only Western territory to do so) and still commemorates its official date of statehood (granted in 1912) as Feb. 14, the anniversary of Jefferson Davis’ establishment of the Confederate territory of Arizona.

In the early days of statehood, which coincided with a spike in Mexican immigration, a streak of racism in the state led to pervasive stereotyping and scapegoating. When the Great Depression hit in the 1930s, Mexicans found themselves harassed and censured. The national prohibition of marijuana in 1937 was bound up with the image of “the Mexican” as “a thief, an untamed savage, hot-blooded, quick to anger yet inherently lazy and irresponsible,” as cannabis historian Ernest L. Abel put it.

During the civil-rights movement, there were repeated allegations that prominent Arizona Republicans, such as former Supreme Court Chief Justice William Rehnquist, orchestrated “ballot security” actions that, as observed on Democracy Now!, “swept through polling places in minority- dominated districts to challenge the right of African-Americans and Latinos to vote.” (In fact, investigative journalist Greg Palast recently speculated that SB 1070 is just an elaborate ploy to tamp down Democratic-leaning minority voters “because the vast majority of perfectly legal voters and residents who lack ID sufficient for [the law] are citizens of color, citizens of poverty.”) Arizona Sen. Barry Goldwater, the Republican Presidential candidate in 1964, was one of the few non-Southern senators to oppose the Civil Rights Act of 1964.

Arizona was one of the last states to recognize the Martin Luther King, Jr. holiday. In 1990, voters rejected a referendum to adopt the holiday, and as one consequence, the National Football League reversed its decision to hold the Super Bowl in Arizona. Voters finally approved MLK Day in 1992 as a result of widespread political and economic pressure.

This highly racialized history has provided fertile ground for numerous hate groups to stake claims here. The most notable include the white supremacist Devil Dogs, active militias openly aligned with neo-Nazism, and the Minutemen vigilantes who took up arms several years ago to patrol the U.S.-Mexico border. Right-wing interests have dominated the state’s governance, although in recent years a more centrist strain has been developing, prompting a reactionary resurgence. Longtime Republican Sen. John McCain is battling a re-election challenge from the right by former state congressman J.D. Hayworth, perhaps best known for his narrow conservatism and losing his seat in the Abramoff lobbying scandal.

In the last decade, Maricopa County Sheriff Joe Arpaio has anointed himself “America’s Toughest Sheriff” through his treatment of undocumented immigrants in Maricopa County jails by using practices associated with racism such as chain gangs. Arpaio’s incendiary tactics have been widely criticized. Using powers authorized through the federal 287(g) program, which delegates some immigration enforcement to state and local police, he conducts massive immigration raids, fostering a reign of terror that has prompted an ongoing U.S. Department of Justice investigation. After the U.S. Department of Homeland Security revoked his authority to conduct 287(g) arrests in October 2009, Arpaio insisted that “they can’t stop me,” vowing to have undocumented immigrants driven to the border if the federal government did not take custody of them. 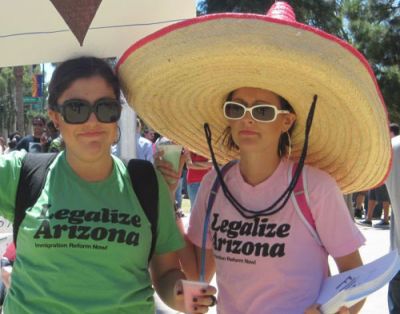 All these episodes past and present have contributed to an environment in which the anti-immigrant SB 1070 was signed into law April 23. The fear-mongering that dominates state politics provides a constant source of wedge issues and demonizing mechanisms to activate the right. Arizona now has the nation’s harshest immigration law, essentially creating a new class of “status crimes” for failure to carry immigration documents. The police are empowered to detain individuals suspected of being in the country illegally, which has opened the door wide for racial profiling.

The bill’s chief sponsor, Republican State Sen. Russell Pearce, pushed for this law for years, but was deterred by the veto power of former Democratic Gov. Janet Napolitano. When she was tapped to head the federal Department of Homeland Security, she was replaced by Republican Secretary of State Jan Brewer. As Democratic State Rep. Kyrsten Sinema recently told me, “Up to now, we’ve been successful in stopping him, [but] folks like Mr. Pearce and his extremist allies around the country have been working toward this for years.”

In particular, the shocking “where are your papers?” aspect of the law, which requires police to demand proof of citizenship based on a “reason able suspicion” that an individual may be here illegally, has raised a national furor. The law also criminalizes anyone who transports, harbors, employs or attempts to shield an “unauthorized alien” from authorities — basically making it illegal to provide ordinary assistance to an undocumented immigrant. As Sinema points out, “The bill criminalizes people for being good neighbors. … If an Arizonan doesn’t ask about their neighbors’ legal status, they’re jeopardizing their own safety under the law. This forces citizens to ‘police’ their own community, which is wrong.”

Since the passage of SB 1070, the Republican-dominated State Legislature has passed another bill (awaiting the governor’s signature) aimed at precluding ethnic studies programs in the state’s floundering school system. The Arizona Department of Education recently instructed school districts to remove teachers from the classroom“whose spoken English it deems to be heavily accented or ungrammatical.”

Still, despite our problematic history with race issues and the current climate of anti-immigrant hysteria, there are also some strongly positive signs suggesting that this crisis can become an opportunity for more effective organizing and enhanced solidarity.

Northern Arizona University professor Luis Fernandez, who works closely with migrant communities, told me, “For years now, the migrant community in Arizona has been suffering quietly, living in fear of an ever more punitive environment. The anti-immigration, nativist and white-supremacist sentiments in Arizona culminated with the passing of SB 1070.”

“The passage of this draconian law had some unintended consequences, namely that it has resulted in the migrant population losing its fear and forcing them to come out against this law,” Fernandez said. “All over Arizona we now have an emboldened group of people who have nothing to lose but their chains. For the first time in a long time, I am hopeful after witnessing the power of the undocumented population: People are speaking out, voicing their dissent, and seeking justice.”

On some level, the appearance of SB 1070 in the national dialogue finally makes plain what many of us here have been experiencing for years. Now that the nativists’ motivations and machinations are out in the open, people have shed their fear, as allies from around the country and world have communicated their opposition to the law and demanded an overhaul of the nation’s immigration laws.

In early May, city councils in Tucson voted 5-1 and Flagstaff voted unanimously to sue the state to overturn SB 1070 and block its implementation. The Faculty Senate at Northern Arizona University overwhelmingly approved a resolution condemning it as “racist.” And the beloved Phoenix Suns basketball team even donned “Los Suns” jerseys on Cinco de Mayo in a show of solidarity.

These remain very contentious and disturbing times here in Arizona, which in many ways befits the national mood. They often say it’s a “dry heat” in the Southwest. Yet with summer not even upon us, it’s already reaching the boiling point.

Randall Amster teaches peace studies at Prescott College and serves as the executive director of the Peace and Justice Studies Association. His most recent books include Lost in Space: The Criminalization, Globalization, and Urban Ecology of Homelessness and the co-edited volume Building Cultures of Peace: Transdisciplinary Voices of Hope and Action.