One example of the out of control federal program occurred last week in Maryland. Florinda Lorenzo-Desimilian, a 26-year-old married mother of three, lives in Prince George’s County Maryland. Last week she was arrested in her home by local police on a misdemeanor charge of selling $2 phone cards out of her apartment window without a license.

Ms. Lorenzo-Desimilian was booked at the county jail. During booking, she was fingerprinted. Local police sent her prints to the FBI who in turn notified ICE (U.S. Immigration and Customs Enforcement) that she had overstayed her work visa. Even though her three children are U.S. citizens, ICE kept her in jail for two days and is now trying to deport her. 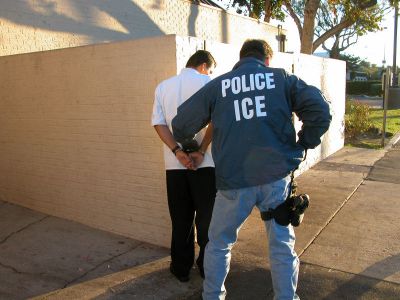 This is the result of a federal ICE and Homeland Security program called “Secure Communities” which is supposed to be targeting violent criminals. Instead, this program is really operating a dragnet scooping up and deporting tens of thousands of immigrants, like Ms. Lorenzo-Desimilian, who are no security risk to anyone.

Congress provided funding to ICE and the Department of Homeland Security in 2008 to “identify aliens convicted of a crime, sentenced to imprisonment, who may be deportable, and remove them from the US once they are judged deportable.”

ICE says this program “supports public safety by strengthening efforts to identify and remove the most dangerous criminal aliens from the United States.”

However, ICE is not actually targeting convicted criminal aliens, dangerous aliens, or even violent aliens. They are targeting everyone.

ICE, through Secure Communities contracts with local law enforcement offices, runs every accused person’s fingerprints through multiple databases, regardless how minor the charges. Thus, people like Ms. Lorenzo-Desimilian are subject to ICE investigation, detention and deportation.

Monday, forty-five people protested with the human rights organization CASA Maryland against the ICE actions aimed at Ms. Lorenzo-Desimilian. Maryland State Representative Del Victor Ramirez challenged the Secure Communities sweeps in a statement to the Maryland Gazette. “She’s not a threat. Should you really be deporting a nonviolent mother of three? There are much bigger problems we could be using our resources for.”

This ICE program is now operating in 165 jurisdictions in 20 states and aims to be in partnership with every local law enforcement office in the country in a few years. ICE admits that in its first one-year period almost one million people were fingerprinted under this program. About one percent, or 11,000 people, were identified as immigrants arrested — arrested not convicted — for major crimes. Most of the people deported by ICE were picked up for minor or traffic charges and not violent crimes. As the Washington Post revealed in March, ICE has explicit internal goals to remove 150,000 immigrants through the “criminal alien removals” and to deport 250,000 others this year.

Basic information about the ICE Secure Communities program has never seen the light of day. Questions like what are the error rates, what is the cost, how is oversight done, what about accountability for racial profiling and other questions have not been publicly disclosed. That is why the National Day Laborer Organizing Network, the Center for Constitutional Rights and the Immigration Justice Clinic of Benjamin Cardozo School of Law filed a federal Freedom of Information Act case against ICE and others this week.

Protests aimed at the Secure Communities program have occurred this week in Houston, Washington DC, New York, Miami, Atlanta, Raleigh, San Bernardino, and Maryland. Critics say the program makes the public less safe not more because it effectively blurs the role between local law enforcement and ICE agents seeking to deport immigrants. Protestors challenge the program deports people before they are even found guilty of committing a crime or even if the arrest was illegal or later dropped. They seek a moratorium on all ICE-local law enforcement partnerships until basic facts about the program are disclosed, debated and evaluated. They created a website of information

ICE responded to these protests with a six-page internal media plan which included targeted op-eds in “major newspapers in the right cities where protests are planned.” The ICE media memo indicated it also arranged ICE interviews with the New York Times, the Associated Press, La Opinion, Telemundo and the BBC.

Regional ICE offices were directed to “reach out to English and Spanish language reporters initially in the eight cities where protests are planned Monday, April 23, to discuss the program and highlight its successes in that local area.” The ICE memo listed sound bites and talking points including “Secure Communities is not about immigration. It’s about information sharing with local law enforcement…”

The ICE media plan also states incredibly, on page five, “To date, ICE has not received any complaints of racial profiling.” That would be real news to people across the country including Ms. Lorenzo-Similian and CASA Maryland.

As the Arizona experience shows us, combining local law enforcement and federal immigration can prove to be quite toxic. Perhaps if ICE would stop spending money on PR to defend its lack of transparency and spend it instead on sharing information about the program so it could be fairly evaluated, the public would be better served.

Bill is legal director of the Center for Constitutional Rights and a law professor at Loyola University New Orleans.