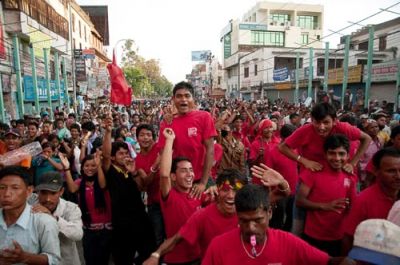 A nation of 28 million people, Nepal is in the middle of a tense standoff between a revolutionary movement and a weakened regime — and the moment of truth is fast approaching.

Text and Photos by Jed Brandt

KATHMANDU, Nepal—Two power structures are at loggerheads in Nepal. One just finished filling the streets of the capital city with a massive civil uprising marked by both discipline and revelry. The other is backed by the rifles of the Nepalese Army and the heavy weight of feudal tradition.

The revolutionary movement led by the Unified Communist Party of Nepal (Maoist) has a powerful base among the rural and urban poor, along with a disciplined political militia in the unarmed Young Communist League and a partially demobilized People’s Liberation Army. It seeks to topple Nepal’s state apparatus — held over from the monarchy that was deposed just two years ago and composed of the ruling classes.

Urban civil uprisings in the mid-1990s first won a parliamentary system of government from the monarchy, but nothing really changed. When expectations crashed into the closed doors of realpolitik elite “democracy,” the Maoists pushed the door open. Over the next decade they built an army to fight a popular insurgency. More than 10,000 people lost their lives in what was the largest armed uprising in Nepal’s history. 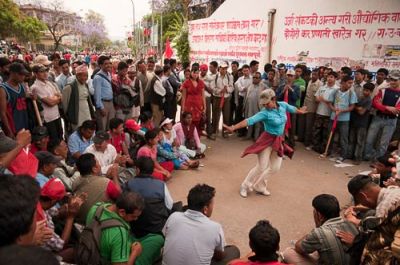 “It was the failure of the political parties to bring democracy, any real social change for the masses of people, that fueled the People’s War,” said Yubaraj Lama, a prominent actor/director who was thrust into radical politics during the movement against the king. “This is what the Maoists changed. People were very fatalistic, looking up to politicians like princes. That is over.”

A second mass uprising in 2006 ended when the king agreed to elections that subsequently saw the Maoist leader Prachanda (Pushpa Kamal Dahal) elected prime minister. Buoyed by broad democratic sentiment, other Maoists won the largest share of seats in Nepal’s new parliament, which abolished the monarchy and announced plans to draft a new constitution.

The new leaders rejected the chance to become broker-politicians. When the Nepalese Army chief refused to integrate former Maoist fighters, Prachanda resigned from his post as prime minister. He returned to his supporters and launched a mobilization that could escalate if a constitution to their liking is not delivered. Which brings us to the present.

While the old army, bureaucracy and foreign treaties are still in effect, no work in the country can be done without the sanction of the Maoists. There are two armies and no real government, a situation of increasing pressure where one side will eventually try to act decisively.

Kathmandu, with its banks and walled compounds, is where Nepal’s national elite live, But on the May Day holiday — May 1st — the Maoists made their move there. The city’s streets were taken over by more than 500,000 party members and their supporters. They demanded the resignation of the country’s unelected prime minister and the creation of a constitutional framework for a “New Nepal” that would put political power in the hands of the country’s poor majority for the first time ever. 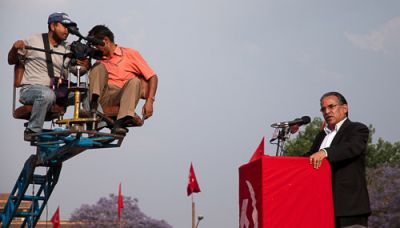 As the protest began, I positioned myself at Kalinki, one of 18 gathering points for marches that wound through the streets to converge at Martyr’s Field in the center of Kathmandu. Red flags with the hammer and sickle were everywhere.

Thousands of restaurant and hotel workers assembled around me as contingents began to arrive. Many of the people who came from the rural areas wore traditional bright saris and wraps. They poured in from every direction, until the final group arrived to cries of “Lal salaam!” (“Red Salute!”). The sight of city workers and students meeting country farmers was a heart-warming contrast to the bigoted hostility and fear I see the elites express toward working-class people.

We started to march. Young Communist League cadre in their matching track suits set up perimeters protecting the route. They held hands in lines along the road and down the side streets leading in, facing off with lines of police wearing black body armor. Inside the crowd, recently trained protesters formed circles within circles, like an onion, to keep the protests orderly and remain prepared in case of the violent repression that the prime minister threatened. 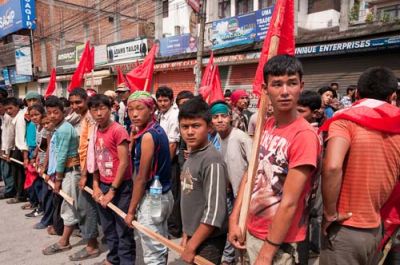 By midday the 18 marches converged at Martyr’s Field. People overflowed out of the huge park and into the surrounding streets. The city was packed for miles in all directions, with loudspeakers echoing the speeches from the center stage. Prachanda and other Maoist leaders from cultural and military fronts shared the stage. The international press was noticeably absent.

The day ended without a resignation from Prime Minister Madhav Kumar Nepal. So the next morning, the Maoists launched a general strike.

By 7 a.m. on May 2, marchers were already in the street. They occupied every major intersection in the city. All stores were closed and shuttered. Protesters made way for emergency vehicles, press, diplomatic cars and water trucks servicing the crowd. The clamor of traffic was gone. The air, for once, was clear.

The only sounds were human; groups in conversation, the rise and fall of chanting groups moving in every direction. Clustered in groups of 50 to a few hundred, protesters filed out of occupied campuses, shopping centers and open fields converted into first-aid centers and communal kitchens. Dancers performed for circles of demonstrators and poets moved like troubadours from corner to corner. 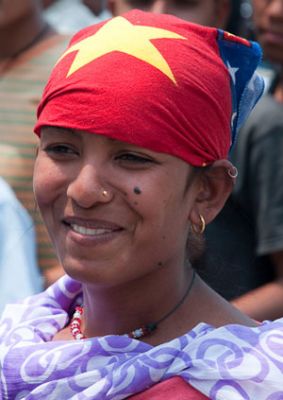 Near Singa Durbar, the government administration center, hundreds of police in riot gear behind steel barricades and coils of barbed wire faced off with the front edge of the protesters. They blocked the drive leading from the prime minister’s walled compound.

Files of marchers moved in and out, then practiced running surges back and forth before the police lines. Hundreds of others sat in groups, passing newspapers around, clustering in meetings and sharing water from trucks festooned with red flags.

When an ambulance turned onto the blocked street, Lekhanath Neupane, a philosopher and leader of the Maoist-aligned All Nepal National Independent Students’ Union (Revolutionary) directed the blockade to make way even while they waved their arms in frustration. “Today is a peaceful demonstration only,” Neupane said. “We will not stop lifelines for the people.”

The blockade was constant from dawn to dusk, when smoke started rising several streets down. Pyres were torched at a dozen locations near the city center in symbolic funerals for the current government and in theatrical climax to the day’s action.

“Nobody is going home until we win. This is our country. These are our countrymen,” said one student whose slight build gave no clue to the years he spent in the People’s Liberation Army during the People’s War. His brother, a schoolteacher-turned-soldier, was among the first martyrs in the war, killed by police in 1996.

On May 3, protesters completely encircled the city twice over, holding hands in two 28-kilometer rows around the Ring Road belt that is one of Kathmandu’s few modern roads. The show of popular power was overwhelming. But the government remained defiant, and the Maoists kept their promise for peaceful protests despite an escalating series of provocations. 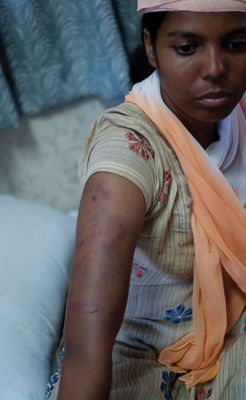 By the sixth day of the general strike, the Maoists had shown their power with the total shutdown of business, schools and transportation. Supplies were running low, people lacked basic necessities, and clashes broke out in several cities. At the end of the day, Prachanda announced on television that the strike would be “suspended” and that rallies should converge the next day in Martyr’s Field to discuss the movement’s shift.

As I walked through the crowd toward the park there was more talk and speculation than chanting. The prime minister had not stepped down, and after two days of increasing tensions, many protesters were prepared for further escalations.

I ran into Manushi Yami Bhattara, a student activist at Tribuvan University and daughter of two Maoist party leaders. “In the People’s War we had two ceasefires, and used them to advance,” she said. “We will have a new tactical phase.”

“The Janandolan hasn’t been called off,” Madushi said, referring to the Nepali word for a massive civil uprising. “Not the agitations either. Our goal is socialism, that is constant and we are not confused. Whether elections or People’s War or this general strike, we find our tactics from our goals.”

In the park, Prachanda told thousands of core Maoist activists that the general strike was preparation for a revolt. Should the government not make way, he said, the general strike would return without the “peacefulness” and “patience” of the six-day shutdown.

Now a May 28 deadline for Nepal’s first democratic constitution looms. Prime Minister Nepal refuses to step down, and has continued to call on the Maoists to disband their People’s Liberation Army and Young Communist League. For their part, the Maoists have mobilized the largest movement of people in Nepal’s history, and rejected talks with the governmental parties until the prime minister steps aside.

“The strike was only a dress rehearsal,” said Prachanda. “We will show you the entire drama before May 28 if our demands are not met.”

Jed Brandt is a New York-based independent journalist reporting from Nepal. His work appears on jedbrandt.net. He is a participant in the Kasama Project. 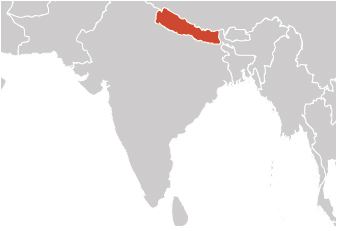 Officially the Federal Democratic Republic of Nepal, this landlocked country in the Himalayas was until recently a feudal monarchy.

In the mid-1990s Maoist rebels launched a decade-long fight to establish a socialist state. In 2006 other political parties joined in mass protests that ushered in Nepal’s first democratic elections. Maoists won the largest share of seats in the new parliament.

On May 29, 2008, Nepal’s parliament voted to dissolve the 239-year-old monarchy and established a secular democratic republic. Maoist leader Prachanda (Pushpa Kamal Dahal) became prime minister of the new government but resigned about a year later when other political parties thwarted his effort to fire the chief of the Nepalese Army. The chief had been appointed by the former king and refused to integrate former rebel fighters into his forces.

The stand-off between the Maoists and remnants of the old regime continues to this day as the country struggles to draft a new constitution. 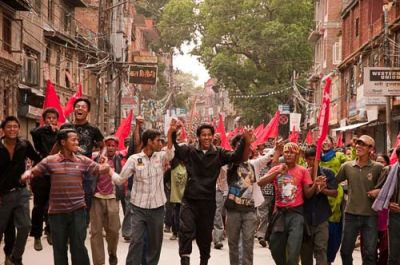