This article originally appeared on Truthout.org. 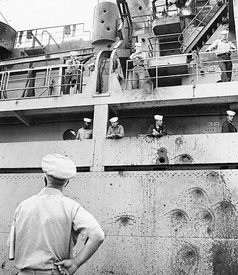 On June 8, 1967, while sailing in international waters, the U.S. Navy intelligence ship USS Liberty was attacked by air and naval forces of the state of Israel. Of the Liberty’s crew of 294, more than half were killed or wounded. More than 40 years later, survivors are still seeking justice.

The Israeli forces attacked with full knowledge that the Liberty was an American ship, yet survivors have been forbidden to tell their story under oath to the American public.

Joe Meadors was on the Liberty during the attack.

“I watched some jets pass us then turn left after they passed our ship, then they started strafing [attacking repeatedly with bombs or machine-gun fire from low-flying aircraft] us,” Meadors told Truthout.

“The attack lasted 90 minutes, during which we got a message off to the 6th fleet asking for assistance, and we learned later, Joe Tully, commanding officer of the USS Saratoga, launched aircraft within minutes of the attack, but he told us later they were recalled before they reached the horizon. We found this out 20 years after the attack.”

Meadors said he and his group, the USS Liberty Veterans Association, believe that Rear Adm. Lawrence Geis, the Sixth Fleet carrier division commander at the time of the attack, was following orders from Secretary of Defense Robert McNamara, who called off the Navy’s rescue mission for the USS Liberty.

Meadors, along with other survivors of the attack, have been engaged in what has evolved into a more than 40-year struggle to find justice.

“The most frustrating thing has been a lack of reaction from the U.S. government,” Meadors explained, “On June 8, 2005 we filed a war crimes report, and they [the U.S. Government] are required to investigate these allegations. They’ve created reports about our mission, but they never did conduct an actual investigation of the attack itself.”

Meadors and the other veterans he works with to bring about a governmental investigation of the attack take the position that they should not have to force the government to do this.

Findings of this commission included: “Israel launched a two-hour air and naval attack against USS Liberty … Israeli torpedo boats later returned to machine-gun at close range three of the Liberty’s life rafts that had been lowered into the water by survivors to rescue the most seriously wounded … Israel’s attack was a deliberate attempt to destroy an American ship and kill her entire crew.”

Ray McGovern is a senior CIA analyst who served under seven presidents – from John Kennedy to George H. W. Bush.

McGovern is clear about why he believes the U.S. government continues to refuse to launch an investigation. “For the same reason that President Johnson called back the fighter/bombers; i.e., so as not to embarrass our friend Israel,” McGovern explained to Truthout, “It is my view that the killing of 34 USS Liberty crew and wounded more than 170 others and the fact that the US Navy, Congress, executive branch not only prohibited the survivors to speak about it, but also launched faux ‘inquiries,’ is the poster child for what is wrong with the U.S. relationship with Israel, showing the penchant of senior U.S. officials to sacrifice honesty, justice, and U.S. servicemen on the sacral altar of “compassionate attachment” to Israel.”

McGovern added that, in his view, the Israeli attack on the USS Liberty is “the archetypical example of how Israel was given convincing affirmation of its belief that it can get away with murder, literally, and the US Gulliver would be bound to ignore it … or even mount ‘official’ inquiries to explain it away.”

Bryce Lockwood survived the Israeli attack on the USS Liberty and was awarded the Silver Star for his heroic actions during the attack, when he saved at least one wounded sailor’s life.

Lockwood, like McGovern, feels there is no doubt whatsoever that the attack was no accident.

“It was deliberate,” Lockwood told Truthout. He went on to explain why he thinks Moshe Dayan, who was appointed as Israel’s Defense Minister in 1967, ordered the attack.

“I only learned recently, via a document released by the CIA, that Dayan ordered the attack, despite objections from his staff members,” Lockwood explained, “Our ship had the capability of monitoring virtually everything … all communications. The Israelis had nuclear capability, and it was extremely important to the Johnson administration that the Israelis not use the nuclear option. We could monitor all of this, even when it was done by the Israelis. The Israelis wanted unbridled use of the nuclear option, and they didn’t want us to know about it … that’s why they attacked us.”

Another reason why Lockwood is so certain that the attack was deliberate is because he watched Joe Meadors hoist three U.S. flags up a pole in an attempt to insure the Israeli pilots knew they were firing on a U.S. ship.

“The Israelis claim they didn’t see a US flag, but they shot down two, and Joe raised three of them, since they kept firing on them,” Lockwood explained, “They riddled the third with bullet holes, but it stayed up.”

In addition, writing in his memoirs, Richard Helms, the director of Central Intelligence at the time of the attack, explained that the CIA undertook a “final” investigation after more evidence became available, and he offered the following information concerning the CIA’s final finding:

“Israeli authorities subsequently apologized for the incident, but few in Washington could believe that the ship had not been identified as an American naval vessel. Later, an interim intelligence memorandum concluded the attack was a mistake and not made in malice against the US…. I had no role in the board of inquiry that followed, or the board’s finding that there could be no doubt that the Israelis knew exactly what they were doing in attacking the Liberty. I have yet to understand why it was felt necessary to attack this ship or who ordered the attack.”

Meadors’ and Lockwood’s struggle to find justice spans decades, and there doesn’t appear to be an end in sight.

Meadors is measured in his explanation of how he perceives the politics behind the lack of an investigation. “Politicians feel the Israeli lobby is so powerful, that if they do anything about this it will cost them votes. Nobody thinks it was a mistake, everybody knows it was deliberate. But they won’t investigate it because they feel it would damage the relationship between the U.S. and Israel.”

“I’m disgusted with our country and our representatives,” Lockwood concluded, “My country doesn’t give a damn about me or the people on the Liberty. I’m terribly disappointed in the way our country has dealt with us.”

While both Meadors and Lockwood urge people to contact their Congressional representatives and demand an investigation, Meadors is moving ahead with looking for an attorney who will help the USS Liberty Veterans group to which he belongs determine if they have a course of action through federal courts.