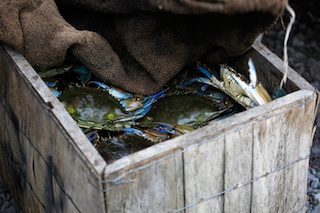 NEW ORLEANS – Environmental experts warn that the ecosystems and food chain in the Gulf of Mexico and surrounding region already deeply harmed and toxified by the ongoing British Petroleum (BP) oil disaster likely face much greater damage.“You know how the pelicans die of oil,” Dean Wilson, the Executive Director of Atchafalaya Basinkeeper asked IPS, “They open their wings, thinking they are drying them in the sun, and they just cook in the sun. Thousands of birds are dying like that because of the greed of a foreign company.”

The organization Wilson heads is dedicated to preserving the ecosystems of the Atchafalaya Basin on the Louisiana Coast. He is incensed at the catastrophic impact the BP oil disaster, which has been ongoing for nearly three months, is having on the Gulf region.

Wilson is equally angry about what he perceives as a lack of willingness on the part of BP to implement measures necessary to adequately protect wildlife, including BP not rescuing the chicks of oiled adult birds, as well as not allowing local environmentalists, like himself, to go out and participate in animal rescue efforts.

“BP is not rescuing chicks,” Wilson added, “You have to realize that it takes two parents to raise the chicks in these areas. If one of the parents gets into the oil, one parent alone cannot raise the chicks, and the chicks are going to die.”

According to Wilson, there are at least as many chicks who have died as rescued pelicans, and the number of pelicans thus far rescued is “only the tip of the iceberg.”

“You can imagine the thousands and thousands of chicks that are starving to death out there, and they [BP] refuse to rescue the chicks,” Wilson added, “We’ve been complaining about this.”

More than 45,000 personnel are currently responding to the BP oil disaster, but higher-end estimates show that as much as 8.4 million barrels of BP oil has been released into the Gulf (more than 32 Exxon Valdez’ worth), and more than 1.79 million gallons of chemical dispersant has been used which concerns scientists and environmentalists because it masks most of the oil that has gushed into the Gulf.

BP continues to use Corexit 9500 and Corexit 9527 dispersants, which are banned in the U.K.

“This is the second most important delta in the Western Hemisphere and one of the most important deltas on the planet,” Orr told IPS, “And we just have no idea what this amount of oil in this close of proximity to the delta could do. The decision was made to use the dispersants intensively to sink the oil – the rationale to minimize shore impacts at all cost. But now it seems like the real reason they’ve been doing that is to get the oil to disappear because if it was staying on the surface, at least you could collect it, even if it starts impacting the shore in some way. But now we have an unknown millions of barrels of oil floating around in the water column and sticking to the sea floor. We may not ever know some of the long-term damages.”

Orr, like many Gulf region environmentalists and scientists, is critical of BP’s lack of adequate efforts towards helping oiled wildlife.

Of their efforts to wash oiled birds and return them to the wild, of which only a relatively small number have been treated, Orr said, “They have to look like they’re doing something.”

He is concerned about all the Gulf species, but in particular the already endangered species in the Gulf that include the Kemp’s Ridley and Leatherback sea turtles, the Sperm Whale, and birds such as the Piping Plover and Gulf Sturgeon.

Jonathan Henderson is the Coastal Resiliency Organizer for The Gulf Restoration Network, a multi-state group committed to “uniting and empowering people to protect and restore the natural resources of the Gulf Region for future generations.”

“There is at least 75,000 square miles of the Gulf covered in oil as we speak,” Henderson told IPS.

Harriet Perry, the director of the University of Southern Mississippi Gulf Coast Research Laboratory recently announced that oil droplets have been found beneath the shells of tiny post-larval blue crabs drifting into Mississippi coastal marshes from offshore waters.

Larval crabs are eaten by many kinds of fish and shore birds.

This is among many other examples of how the oil has already made its way into the food chain.

Henderson told IPS that oil-soaked birds are being eaten by coyotes, who are then later eaten by alligators further inland.

Wilson expressed concern for microorganisms that are feeding on the oil, particularly in the deeper regions in the Gulf where BP has sunk the oil via heavy use of dispersants.

“We’re very concerned about the deep water,” Wilson told IPS, “I’m very concerned about the whales and whale sharks. There is a big population of them that migrate right where the oil is. We’ve already seen that the shark won’t avoid the oil. It will go right though the oil. We’ve seen schools of hundreds of whale sharks migrating through the Gulf of Mexico. They open their mouths and filter plankton-so they will do that and swim right through the oil, it will contaminate their gills, and they will suffocate.”

“We can’t play around with BP’s toxic science experiment and sit around and wait for the outcome in the Gulf,” Henderson added, “Even if they capped this thing today, we still have our work cut out for us, and I have a feeling this isn’t going to be the last of these kinds of well blowouts.”

This article originally appeared on the Inter Press Service.