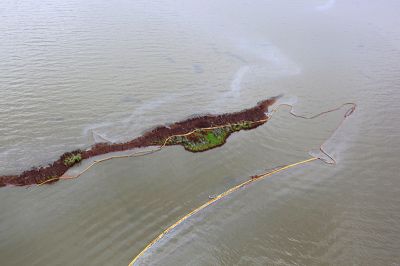 From the air, the area north of Grand Isle, Louisiana, much of it around Barataria Bay, looks like scorched earth. This area has been and is heavily afflicted by BP’s oil. The so-called clean up efforts, including laying out booms to supposedly prevent oil from destroying more marsh and killing more wildlife, are a farce.

Opaque multi-color sheen stains much of the bay, and is visible in countless inlets that snake their way into the marsh. The contrast between the green marsh area yet to be soiled and the marsh already blackened by the oil and the sheen covered Gulf water is stark. The afflicted water appears as a lifeless, dull, silvery fluid. 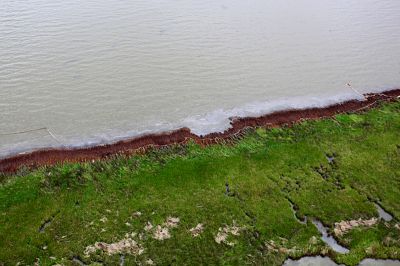 While BP has put forth great effort in securing tax benefits acquired from leasing rigs like the sunken Deepwater Horizon, it has also saved money by choosing not to pursue better clean-up methods and technologies. We live in a corporate world where profit is god. Profit rules. Showing a profit on the next quarterly earnings statement is everything. This is how a multi-billion dollar oil giant like BP (yes-we can include the others as well-Exxon/Mobile, ConocoPhillips, Royal Dutch Shell, Chevron, Total S.A.) spends vast troughs of money on developing the latest oil exploration and drilling technologies. But when it comes to cleaning up their toxic mess when disaster strikes, every expense is spared.

Many people across varying industries working in the so-called clean-up effort understand that laying out boom to contain oil is largely an act designed primarily to impress politicians and un-informed media. The so-called clean up work BP is engaged in on the soiled Gulf coast has been shoddy, at best, including allegations that BP has been dumping sand atop oil on beaches to cover it up. Controlled oil burns in the Gulf are also, needless to say, coming under criticism for their devastating impact on the environment, in addition to negatively impacting human health of residents on Louisiana’s coast.

But this should not come as a surprise, given that one of the first things BP did in the immediate aftermath of the Deepwater Horizon disaster was to launch a campaign to strengthen its legal defense with the best attorneys money can buy, reign in legal teams, and buy up experts who might otherwise work for plaintiffs in cases against the oil giant.

The more we see of this so-called clean-up and containment plan of BP’s, the more it appears to be the second largest contributing factor in destroying the ecology and culture of the Gulf region, behind of course BP’s oil volcano at the floor of the Gulf.

From the air, we see the same boom catastrophe as we did from our recent boat trip into the marsh. In some areas, boom does little more than outline the dead areas of the marsh, having gathered into piles and left to soak oil directly onto the land. 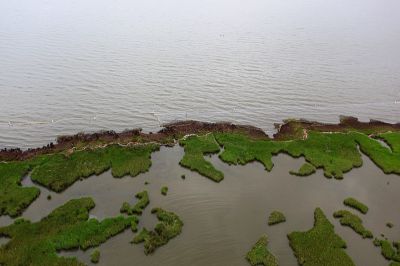 Time after time we fly over small marsh islands, their shores scorched by oil, the marsh grass immediately dying, surrounded by boom.

Sheen covers the water, held against the islands by the booming. 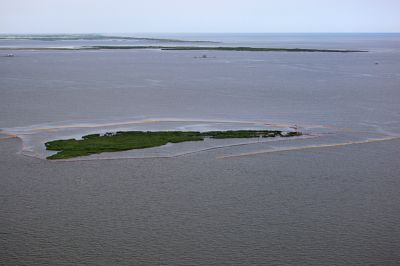 “It’s as though the booms do nothing more than hold oil in the marsh, rather than keeping it out,” I comment into my headphones as we fly low, just above the soiled islands. Charlie, our pilot, nods.

Erika hangs out her open window, taking hundreds of photos of the destruction caused by BP’s criminal negligence.

The vile physical destruction of these fragile wetlands is an ominous precursor of worse that is to come. Wildlife experts recently reported that the toll on sea birds from the BP catastrophe will soon change dramatically for the worse.

“Scientists warn that as shifting weather and sea conditions conspire with the dynamics of avian life cycles, a tremendous number of birds will soon be put in jeopardy,” says an article in Scientific American, “In the coming weeks, millions of waterfowl and other birds that flock to the U.S. Gulf Coast on their annual fall migration will arrive in the region either to roost for the winter or to make brief stopovers en route farther south. With toxic crude still gushing from the floor of the Gulf of Mexico and streaks of the slick creeping inexorably farther inland, many more birds and other wildlife that nest, feed and find shelter on shore are likely to become casualties.”

This warning has sparked a desperate rush to try to find ways to lure tens of millions of migrating birds away from the oil-infested marsh that has historically served as their habitat.

“The impact of the Gulf disaster on migrating birds will be like a train derailment during rush hour,” Frank Gill, president of the National Audubon Society, said. “Not only will it affect the entire system, but its repercussions will be long-lasting.”

This concern has spurred the USDA’s Natural Resources Conservation Service to launch a $20 million program that aims to pay landowners in the Gulf region to idle land, restore wetlands and enhance habitat.

Will it work? This worsening disaster shows us how futile it is to tinker with nature-whether it be via drilling for oil in the depths, or then trying to mitigate the annihilation of nature and life in ways that often make the situation worse via unforeseen consequences.

And this comes on the heels of destruction in this area caused by oil and gas companies that spans decades. “They dug these canals that have let the saltwater from the Gulf of Mexico into what used to be fresh-water marshes,” Charlie, who has spent more than five years in a plane flying over this area, tells us while we fly over the remnants of what used to be a fertile, green carpet of a marsh, “That let all the saltwater in that killed the marsh. This land is now fractured. It’s blown all to hell.”

Most of the small marsh islands we fly over are soiled black and brown by BP’s oil. Some of the worst areas are surrounded by brand new pure white boom that has no oil on it. This boom, aside from possibly keeping more oil from reaching the already destroyed area, functions as little more than show, given that the oil has already contaminated the marsh island. 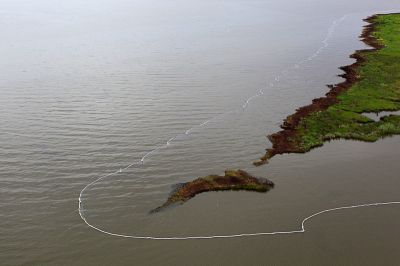 Sheen covers most of the bay. As we fly low over shallower areas, ripples move across the sheen that are caused by schools of fish moving just below the surface.

In another area, a pelican flies parallel to a red boom. I wonder if it will land in sheen-covered water, or if its rookery has already been destroyed.

Charlie flies us out near the barrier islands that separate the bay from the Gulf of Mexico. Between two of the islands, just behind one of them, a series of barges are being set up, end on end, in a crude attempt to block off the pass between two islands. 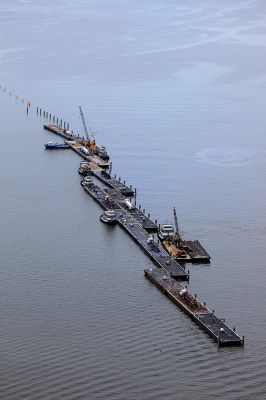 “Here’s where they are trying to block a pass to keep the oil from getting into the bay,” Charlie explains while banking the plane so Erika can get a clear view, “But the wolf is already in the hen house.”

It is impossible to articulate the futility of these clean-up and preventative efforts.

We do not see one marsh island surrounded by boom that has actually kept oil or sheen from reaching it.

But, again, we are looking at a company that only by threat of lawsuit by the Center for Biological Diversity agreed to stop incinerating endangered sea turtles alive.

Dahr Jamail is an award-winning independent journalist. His writes for Inter Press Service, Le Monde Diplomatique,  and many other outlets. Visit his blog for more reporting on the oil spill in the Gulf, as well as the Iraq War.

Erika Blumenfeld is an internationally exhibiting artist and Guggenheim fellow with a BFA in photography from Parsons School of Design.  She is posting her photographs of the Gulf Coast on her blog.