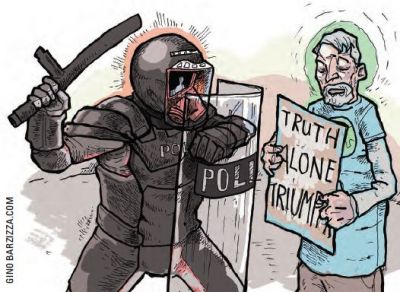 If it is true, as Karl Marx once observed, that the powers that be summon all their strength and violence just before their final agony of death, then the city of Toronto — indeed, all of Canada – was dying a month ago. Regrettably, I have my doubts as to the veracity of this claim.

An estimated $1.2 billion was spent on security for the G8 summit held in Ontario’s cottage country June 25 and the G20 summit held in Toronto June 26-27. It was enough money to purchase an arsenal sufficient for the martial law that was implemented, though never declared as such. Sound cannons, water hoses, high-tech tear gas devices, rubber and plastic bullets, and between 16,000 and 20,000 police were imported to secure the world leaders attending the summit.

Trains were halted at Union Station, Toronto’s busiest terminal. A massive detention center was erected at the Toronto Film Studios in the city’s east end — a warehouse filled with cages to hold the prisoners that the police state would soon apprehend. A 16-foot-high fence surrounded the Metro Convention Centre, occupying many city blocks and halting all business within and around the area.

The Toronto Community Mobilization Network, an umbrella organization that facilitated rallies, teach-ins and events prior to the G20 summit, helped organize the “People’s Summit” the weekend before the G20 and the “Themed Days of Resistance” during the official summit. Marches against G20 policies took place almost daily across the city, including marches for gender justice (since Prime Minister Stephen Harper was pushing the Maternal Health Initiative that would not include funding for or information about abortion access); aboriginal rights (since Canada has consistently refused to sign the U.N. accord on indigenous rights); and environmental justice (since Canada is one of the world’s biggest polluters and has scoffed for years at combating climate change).

Every day heralded some new movement’s incorporation into the movement of movements in a way that has not been seen in Canada since the heyday of the global justice movement a decade ago. There was a palpable and inspiring energy coursing through the streets that week.

And then the arrests began. 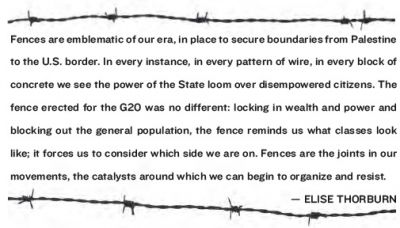 Before the main march started on June 26, organizers were already being jailed. Early Saturday morning, two homes were raided and sleeping citizens were pulled from their beds and dragged to the detention center. In one instance, the police got the address wrong and attacked a family who had the misfortune of living in the apartment below some organizers with the Toronto Community Mobilization Network. On June 25 my friend Ken was at the Toronto bus station. Ken was to be a cook in the People’s Kitchen at the Convergence Center, a space for activists to rest, read and eat during the week of actions. As he and a friend removed belongings from the bus station lockers, cops moved in. They unlawfully searched his bag, finding “weaponry” such as vinegar-soaked bandanas, first-aid equipment and a copy of Upping the Anti, a Toronto-based journal of political theory and activism. They immediately arrested him, charging him with “conspiracy to commit mischief.” Apparently in Canada protecting oneself from tear gas and having radical politics has become illegal. He spent the weekend in detention, was released on bail, and never received his wallet, identification, camera or cell phone. His story is not unique.

Over the weekend of June 26, and mostly on Sunday following the main protest, 1,090 people were arrested, the largest mass arrest in Canadian history: more than during the Clayoquot Sound protest in 1993; more than during the October Crisis in 1970. Some of the arrested were bystanders, some were couples on dinner dates, and some were hard-working activists and organizers. Women held at the detention center were threatened with gang rape. People passed out from deprivation of food and water for more than 24 hours.

Journalists were arrested for covering the events. Street medics were jailed for administering aid. People were arrested for singing Kumbaya and the national anthem, “O Canada,” for wearing black, for possessing a bandana, for traveling in a group, for being a community activist and for being on public streets. As of this writing, arrests continue and some hearings are operating under a publication ban, barring the public and press from the proceedings. At least 17 people are charged with serious yet spurious offences, including conspiracy, possession of dangerous weapons, “mischief” and obstruction of justice. The reality is that they are being charged for publicly demonstrating their political opposition to the G20.

The corporate media reported that anarchists and communists rampaged through the streets, violently smashing shop windows and terrifying innocent passersby. Only in a commodity- obsessed society does an inanimate object such as a bank window or a police car have “violence” committed against it. “Violent” would be what happened to John Pruyn, a Niagara-area resident who came to Toronto with his family to peacefully protest the G20. He was sitting in Queen’s Park, the official “free speech zone,” when riot police ordered him to move. Due to his prosthetic leg, Pruyn had trouble hoisting himself off the grass, which was when the police began kicking and beating him. Pruyn says one cop kneeled on his head as others yanked at his arms. His prosthetic leg was wrenched from his body and tossed aside, while he was carted off to the detention center. Left in a cage for 27 hours, he was finally released without charges, and without his money, walking sticks and eyeglasses.

The summit ended June 27 with hundreds more arrested in violent roundups, “kettlings,” and raids on university student centers and the Convergence space. On Sunday the police fired rubber bullets and sprayed tear gas at demonstrators. 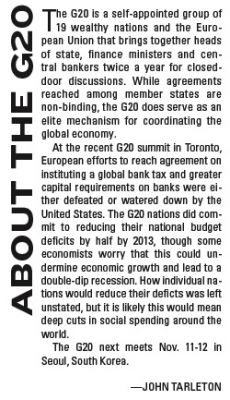 Following the summit, solidarity demonstrations have taken place in Toronto regularly, as well as across Canada from Halifax to Vancouver and Winnipeg to Montreal. Still, polls put public support for the police around 68 percent. On July 7, the 36 members of the Toronto City Council in session voted unanimously to commend the police force on their actions during the G20 summit.

Why did we gather on the streets of Toronto? Why did we march, chant slogans, smash windows and burn police cars? Because of the abuses of power that filter down from the G20 to the Toronto municipal government. Because of the sham of democracy used to shield the public from the truth. Because the G20’s policies serve only the interests of those inside the barricades erected to protect capital. Because the elite will use this force again and again to fend off protests, punish resistance and enforce their policies. Because this violence happens every day in communities of color. Because this violence is not new in the countries from which the G20 nations extract their wealth: the G-others.

We gathered on the streets of Toronto, and we continue to gather here and everywhere because we are ready, because we refuse to be afraid, because we demand to be heard, because together we are strong and because we fight to win.

At least $250,000 is needed to cover the defense of those with remaining serious charges. To donate, visit g20.torontomobilize.org.

Elise Thorburn is a scholar and activist based in Toronto.