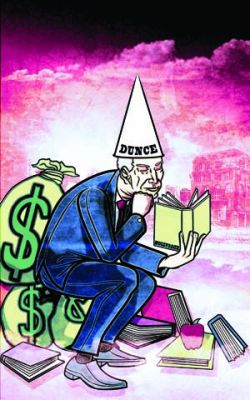 The reasons why public education is suddenly an issue despite years of neglect by politicians and the media are straightforward. In this depressed economy credentials seem to have lost their advantage. Many parents and politicians claim schools have failed to deliver what students need. There is a widespread perception that illiteracy is rising, meaning, for one, that fewer people can read complex texts. And the results of No Child Left Behind with its draconian high-stakes standardized testing have been disappointing, to say the least.

Mainstream educators and commentators warn that the United States, once a leader among advanced capitalist societies in graduation rates, has fallen to 12th place and is still tumbling. Many are concerned that education has become a national security issue. Others point out that the engines of the global economy are math and science and this country is turning out fewer trained physicists, chemists, biologists, mathematicians and computer scientists.

Some trumpet as solutions the usual neoliberal bromides — charter schools and for-profit private schools at all education levels. But, according to numerous studies, these schools rarely live up to the hype. Others have rejected the long American experiment with progressive education, in which students are the subjects of schooling, not just its object. In the 1980s, school authorities decided that kids needed more discipline, more time in school and more homework. The latest brilliant policy concept is to reward or punish teachers for their students’ performance.

Teachers unions have soundly rejected this particular “solution,” calling it a blatant attack on teacher professionalism and living standards. In a time of severe cuts in school funding, however, many locals of both major national teacher unions have meekly accepted layoffs, increased class sizes and performance criteria. Above all, neither the unions nor educational authorities have offered serious alternatives to the conservative-led drive toward neoliberal privatization. And the left seems content to roll out the usual proposals: more money for schools, wider access for poor and working-class students of color to higher education and an end to privatization.

While these reforms are necessary, they are hardly sufficient. The right wants to keep kids’ noses to the grindstone by testing them into submission, hand off schools to the for-profit sector and throw unworthy, disruptive kids out of school or at least relegate them to “special education,” the only thriving sector in K–12.

Most liberals lack a similarly direct and powerful program. They may praise the centrality of critical thinking, a legacy of the progressive era, but they mainly offer band-aids. That’s because liberals have accepted the dominant framework that education, or more accurately, schooling should serve the economy by training students to take their respective places in the world of work.

Not true. What radicals should offer handwringing liberals is what radicals do best: go to the root of things. Education should be a preparation for life, especially helping kids become active in determining the conditions that most affect them.

The Root of Things
Lev Vygotsky, Jean Piaget and Jerome Bruner, three leading 20th-century theorists of developmental psychology, argued that the curriculum, the heart of school learning, should be articulated with the sensory motor skills of children. They asserted forcefully that imposing academics is inappropriate for young children until ages eight or nine. They reason that while children aged three to seven have developed significant cognitive abilities, the algorithms associated with the acquisition of most academic skills are really beyond the capacity of most children. This is a time of life when the imagination should be the subject and the object of learning. Reading, writing and math need not be withheld, but the main content of learning at earliest years can be delivered by means of play. The model of kindergarten is the right one for younger kids. They are learning to get along with their peers, to manipulate objects; to experiment with painting, sculpture and music; and to express themselves orally as well. Kids who express an interest in reading, for example, should be encouraged and the teacher should provide suitable materials and integrate reading with play.

All The World’s a School
Later, when academics are near the center of the curriculum, the classroom should largely be transferred from the school building to the wider world. Vygotsky described how confining a child to a desk for hours subverts her development. The ages of eight to 12 are times for exploration, for the flowering of curiosity: the city as school means that museums, research laboratories, health and senior centers, concerts, factories, offices, parks and the streets are all learning sites. “Field trips” are no longer occasional activities but regular events woven into the entire school day. Students meet musicians, artists, industrial and service workers, scientists, urbanists — all of whom become part of the school faculty. Reading, math and science become important components but in terms of assisting the learner to effectively negotiate her environment and to stimulate further critical learning.

At ages 11 or 12, having explored the social and physical environment, the student has acquired the developmental conditions for academic rigor. In this regard, it should be acknowledged that some domains, such as math, science, grammar, history, even music, are full of rote dimensions. But rote should be combined with conveying both the practical and historical significance of basic math, algebra and geometry; the importance of chronology in learning history; the stories, as well as the laws and procedures of physics, chemistry and biology. Ecology should become an important part of every level of education and its comprehension should have a theoretical as well as descriptive content.

At the same time, history and literature should not privilege nationalism. So-called American history is bound up with the African slave trade, the reasons for immigration, the drive for imperial domination, the need of capital for vast supplies of industrial labor (as former slaves were confined to the cotton and tobacco-producing plantations of the South and barred, except as strikebreakers). History shows that workers’ struggles from metal and textile factories to farms and ranches are intrinsic to the American story — beyond the narrative of united interests during wartime — which gives lie to the official ideology that America was the Great Exception to the European experience of class and class struggle. And great American literature was, and is, produced by Blacks as well as whites and was always bound up with the narrative of American history, from the slave narratives to the works of Melville, Whitman and Hawthorne.

The distinction between middle school and high school should be challenged. The 7–12 grade model could be more widely disseminated because these are the main years for cultivating critical, intellectual capacities. As some educators have discovered, young people of these ages are able to read original texts rather than suffering watereddown textbooks. Music and art must remain a vital component of the curriculum. Students need their own periodicals that they control without interference by school authorities, not only for peer communication but as places where criticism of both school and society can flourish outside official channels.

Don ’t Know Much Philosophy
In France, high schools have required the study of philosophy, though less so in recent years. High school graduates had knowledge of the main traditions of European philosophy in its classical form: the pre-Socratics, Plato and Aristotle, medieval thinkers, Descartes and Kant, Bergson and some 20th-century philosophy.

Philosophy has been excluded from the U.S. secondary schools, with the exception of elite, mostly private schools. This is a telltale sign that we don’t take critical thinking seriously as an educational goal. If philosophy has pedagogic value, it is to teach students the value of doubt, without which it is impossible to penetrate propaganda and discern the presence of particular interests within knowledge.

I can hear the critics respond, “All well and good, but who will teach all of this? What happens to teachers trained in the old curricula?” The short answer is that we need a major reformation of education schools. If they are to exist, students must be required to major in subject matter and education becomes only a minor. The education minor should not focus on teaching methods, but on concepts associated with critical thought, that is, philosophy and history, but not only of education. And there needs to be a massive program of faculty development to prepare experienced teachers for the new curriculum. They should not be “trained” but, even as they widen their own scope, should be asked to participate in planning elements of the curriculum. So the curriculum no longer remains the prerogative of central authorities whether administrative or legislative. Renovating teacher education would, of course, involve the professoriate as well. And parents and teacher unions should become part of the planning process.

These ideas are all subject to debate, discussion and revision. Yet without radical political and social movements standing behind educational change, school reform is unlikely except in the cosmetic sense. We need projects that challenge the mainstream if there is to be any change at all. At the moment, these projects are few and largely invisible, partly because they have not made a public display of their difference. But we need to begin to explore what an education reveille for radicals, to borrow a phrase from Saul Alinsky, would look like.