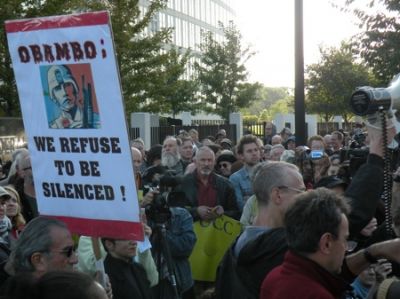 Agents from the Federal Bureau of Investigation served 11 antiwar activists with subpoenas and raided eight residences across the Midwest Sept. 24. Activists in three other states, including California and North Carolina, were also approached for questioning in what warrants say is an investigation into material aid for terrorists.

“I was downstairs with my 6 year old who was running around in her underwear trying to get me to let her watch cartoons,” said Steff Yorek, whose home was one of five raided in the Minneapolis area. Eight officers broke through her door with a battering ram, and later left with boxes that included computers and the journal of the recently deceased grandfather of her partner, Jess Sundin. Two homes were raided in Chicago, and five homes in Minneapolis, along with the offices of the Anti-War Committee.

Protests were held in 19 cities across the country in advance of the activists’ October court dates.