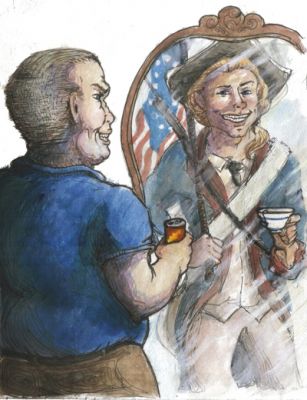 The emergence of the Tea Party  movement is the most significant development in U.S. politics since the election of Obama. Although right-wing parties are on the rise throughout the West, in Sweden, France, Italy and elsewhere, the speed and scale of the growth of the Tea Party has been extraordinary.

Commentators and analysts such as Paul Krugman have downplayed this troubling development by labeling it an “Astroturf” movement  — one conceived and financed by corporate interests. Even if it is true that the Tea Party is organized and supported through corporate wealth and pimped through Fox News and other likeminded apparatuses, this in no way takes away from the scale and depth of support that actually exist for it and its values. Indeed, populist movements inherently involve an alliance of some fraction of the dominant classes with a significant portion of the dominated classes.

In truth, we face the sobering reality that capitalism’s latest crisis — complete with bank failures, corporate bailouts, rising unemployment, and declining wages — has aided the right, not the left. How can we explain the capacity of the right to benefit from and redirect the bitterness and discontent that derives from capitalism’s own failures?

The Tea Party movement should be understood as a political response to the crisis. While it was spurred into existence by the current economic malaise, any attempt to understand the Tea Party purely in economic terms is bound to fail. Take two of the chief concerns: reducing taxes and the federal debt. Leaders and followers alike rail about cutting taxes, but the super-rich will benefit the most, not Joe the Plumber. Reducing taxes and deficits concurrently will mean kneecapping government and crippling Medicare and Social Security, which are lifelines to those over 50 years old — the demographic heart of this new movement. Indeed, middle classes clamoring for a decrease in public spending and services is the opposite of what one would expect.

In fact, the Tea Party eschews economistic, self-interested behavior when it comes to political life. Party supporters think that things have gone awry precisely because Americans are driven by the nihilistic pursuit of self-interest. For them, a growing permissiveness and abandonment of core principles plagues the United States. The movement trades in the language and images of freeloading and criminal immigrants, self-serving and spendthrift politicians, drug-addicted and lazy welfare recipients, unpatriotic and oversexed liberals, seditious Muslims and so on. In all cases, it is the inability of such groups to overcome their own particularity, their own self-interest and desires, that functions as the key problem.

This simple principle allows Tea Partiers to understand their own personal misery and lack of satisfaction as well as the perceived decline of U.S. political and economic prowess. If greedy bankers and labor unions, corrupt and servile politicians, and free-riding law-breaking immigrants behaved in a more disciplined and principled manner, then we would finally be able to enjoy our own lives and the United States could go back to its former greatness. The Tea Party is attempting to renew U.S. potency through the rediscovery of the capacity to put off pleasure, to not be a slave to selfish drives. It is an attempt at revolution in the same sense that the “founding fathers” would have understood the term, as going back to the original state of things, or, more precisely, going back to some mythical version of the original state of things.

By evoking the Boston Tea Party, the movement is both referencing the national founding and celebrating patriotic pleasure and sacrifice, the satisfaction achieved from smashing barrels of Tea and risking arrest for the benefit of the nation. The resurgence of militias and the repeated references to guns and violence in Tea Party discourse, such as Sarah Palin’s “Don’t retreat, reload,” are directly related to this desire to regain the phallus, our potency and capacity for satisfaction. Palin often reminds us of the virtues of being a pit bull with lipstick, of defending and serving the family even when it might be difficult or costly (such as deciding to give birth to and raise a child with learning difficulties). Even Christine O’Donnell’s moralizing against masturbation makes sense in this context: being able to resist sexual urges is a training of the self to not be driven by pleasure seeking.

Returning to an era when the United States was economically and politically powerful, thus, corresponds with the desire to restore order and to put things back in their place. It is expressed by reasserting the core values of Christianity: self-control and people knowing their place in society (not least Obama who, after all, belongs in Africa according to many). Tea Party supporters imagine a return to an orderly and selfless society where they could finally achieve satisfaction and the United States would regain its potency.

Obviously, this desire to return to a society that is not driven by self-interest and where everyone knows their place cannot be realized. This America never existed and never will exist. More to the point, the fundamental drive of market society is one of utility seeking and of rapid change, as summed up by Joseph Schumpeter’s “creative destruction” and Karl Marx’s “all that is solid melts into air.” Capitalism without greed or excess is the impossible political vision of the Tea Party.

The Tea Party discourse taps into the passions and pleasures of many Americans. The satisfactions that come with being frugal, balancing a checkbook, sacrificing for one’s children, waking up every morning and getting to work on time are displaced onto their political identities. The passion that Tea Party supporters display is a result of this displacement. They are defending these satisfactions from perceived threats that are imaginary.

Tea Partiers are merely expressing their self-loathing and the inability to reconcile their selfishness, consumerism and utility-maximizing behaviors with their own self-images of civic and moral responsibility. We are faced with contradictory social demands, to be greedy market-oriented individuals and, concurrently, self-sacrificing patriotic defenders of the common good. Similarly, we are constantly confronted with the discontent, alienation and lack of meaning within modern life and the impossible goal of achieving satisfaction through market life and consumerism. These core contradictions and tensions become externalized and take on the face of the “immigrant” the “liberal” the “politician” or the “Muslim.”

The Tea Party movement has woven together an ingenious populist discourse, drawing upon the displaced sexual energy of many Americans and using that energy and passion to mount an attack on a large and nebulous set of groups and interests that, presumably, lie behind our current crisis. No doubt there is plenty of racism, sexism and xenophobia within the movement. Indeed, it is again acceptable to be openly racist and heterosexist in American politics, as evidenced by the continuing legitimacy of Carl Paladino’s candidacy.

The right has capitalized on the current anxieties and systemic failures of liberal capitalism, and it has marshaled this discontent toward a reactionary movement that chases a proto-fascist vision of a society without greed or any other excess. It may not be that Palin and O’Donnell are reading Carl Schmitt, Jacques Lacan, Leo Strauss and Antonio Gramsci, fine-tuning the Tea Party project, but someone likely is. The left needs to take heed. The right has obvious advantages in terms of resources, including media access. But they are also outthinking us.

The left does not have a comparable political project, one that is able to draw upon the libidinal dimension of contemporary life and meld it with a universal political principle, one that is able to negotiate the contradictions inherent to modernity and use that discontent toward the establishment of a revolutionary future. If anything, we only come up with partial repetitions of the Tea Party discourse itself, weak denunciations of corporate greed and market brutality, a limp moralistic message that conforms to the desire for order and the taming of excess.

The left needs to articulate a much more substantive political project, one that goes beyond simple questions of redistributing some wealth and defending civil liberties and rights. A new world may be possible, but does anyone, even on the left, want one?  If the Tea Party gives voice to the desire for order and security, where is the desire for purposeful social transformation and revolutionary change?

Peter Bratsis teaches political theory at the University of Salford. He is the author of Everyday Life and the State and an editor of the journal Situations.