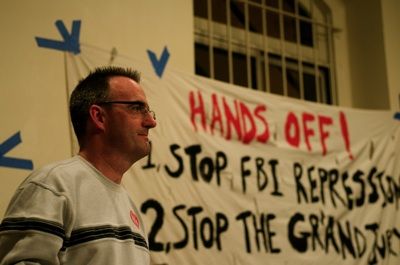 Tom Burke began the morning of Sept. 24 like any other. His wife took their 5-year-old daughter to school before heading to work in their Michigan town. Then the phone rang, and he learned that FBI agents were raiding the homes of friends in Chicago. As any good organizer would, Burke jumped into his car to produce a press release at the first internet cafe he could find.

He then realized someone was following him.

“This car turned around twice behind me, and I thought that’s funny because I don’t know where I’m going,” he chuckles. He called his wife and headed to her workplace. As he drove through the security gate, a black SUV zoomed in behind him. His wife came down, and three people jumped out of different vehicles and made a beeline toward them. “The man came out [of the SUV] and identified himself as FBI. And he served me and my wife with subpoenas.”

In multiple raids, three subpoenas were served on Chicago antiwar activists there, giving them October dates to stand before a Federal Grand Jury. Another six were issued in Minneapolis during six FBI raids, including one of the offices of the Anti-War Committee (AWC). FBI agents allegedly had a key when they entered the AWC office, where they seized checks made out to the group, cash registers and checkbooks. Three days later, three more activists in Minneapolis were served with subpoenas.

All told, more than 70 federal agents were reportedly involved in the eight raids, and some individuals claim they were subjected to intimidating phone calls and visits by agents in North Carolina, California and Wisconsin.

None of the 14 individuals were charged with crimes, though the subpoenas indicated the federal government was considering charging them with providing material aid to terrorists, specifying solidarity work in Palestine and Colombia.

These allegations come on the heels of the recent Supreme Court decision in the Humanitarian Law Project v. Holder case that expanded the definition of “material aid” to “terrorist groups” to include educating designated groups in nonviolent methods for conflict resolution and delivering humanitarian aid to areas under their control after natural disasters.

“Their goal is to bring charges of support for terrorist groups against the people who were subpoenaed,” said Burke. “They’re trying to pit people against each other and …put people in jail.”

Instead, various social movement organizations sprang into action. As the FBI raided Joe Iosbaker’s and Stephanie Weiner’s Chicago home, carting out 26 boxes of their family’s personal effects, dozens of friends and activists arrived in a display of solidarity. Across the country, Burke said, rallies or pickets were held in 60 cities demanding an end to the subpoenas and the grand jury investigations. In New York, Chicago and Seattle fundraisers were held to garner money for legal defense.

Antiwar, civil liberties, socialist and other groups called for U.S. Attorney General Eric Holder to shutter the federal grand juries. Many of those under attack are shop stewards in their unions, and AFSCME , AFT and Teamsters locals were among at least 17 labor groups that have issues statements of solidarity, which are available at stopfbi.net.

While the subpoenaed individuals were each given one of three dates in October to appear before a federal grand jury in Chicago for questioning, all have refused to testify. They say they are willing to go to jail rather than participate in what they call a government fishing expedition of information from antiwar and international solidarity movements.

While the government rescinded the subpoenas and no one was imprisoned, three Minneapolis activists were re-subpoenaed only days after the November election.

During the first weekend in November, Tom Burke, Jess Sundin, Steff Yorek, and Hatem Abudayyeh traveled to New York to organize the inaugural meeting of the Committee to Stop FBI Repression. The event drew 150 people and raised several thousand dollars for the legal defense budget. Organizers have also reached out to Arab, Muslim and Puerto Rican communities that have been recently hit with subpoenas, raids and indictments by the U.S. Department of Justice.

The subjects of the raids say the outpouring of support is important. “You feel pretty isolated at first,” says Jess Sundin of Minneapolis, whose home was raided. “But it’s very quickly obvious that we are not alone.”