This article was originally published on CommonDreams.org from The Huffington Post. 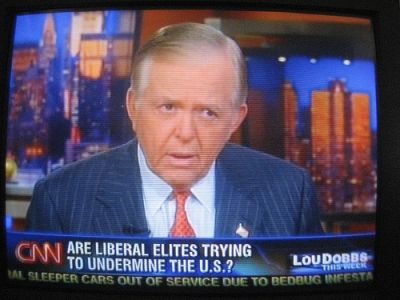 Given all the recent speculation about a possible Lou Dobbs candidacy in the 2012 election, the recent news that Dobbs will instead join the Fox Business Network may strike some people as quite anticlimactic.

On the final episode of CNN’s Lou Dobbs Tonight, exactly one year ago today, Dobbs told his audience that he was being urged by leaders to “go beyond the role at CNN and to engage in constructive problem-solving as well as to contribute positively to the great understanding of the issues of our day.” The ex-TV host, who made his career bashing undocumented immigrants and their employers, stated in June that he had not “ruled out” a run for Senate or the presidency in the next general election.

However, last month The Nation revealed that this longtime critic of “illegal aliens” has himself relied for years on undocumented labor for the upkeep of the grounds of his estate and his show jumping horses.

Just a month after Dobbs was called to account for his hypocrisy on immigration on MSNBC’s Lawrence O’Donnell show and on ABC News, he now appears to be planning a return “to a business-oriented brand” associated with his earlier days at CNN, Jack Mirkinson recently commented on Huffington Post.

Indeed, this may seem a less embarrassing prospect for Dobbs than attempting to turn his tirades against the “illegals” who for years tended to his estate and horses into a political campaign. Even by the admittedly low standards enshrined in Fox programming, Dobbs’s credibility as a champion of a get-tough approach to immigration may be destroyed beyond repair.

Yet when it comes to his record on business reporting, Dobbs’s hypocrisy has been no less flagrant.

On his CNN show, Dobbs was an outspoken critic of corporate outsourcing, and even created a website, “Exporting America,” devoted to exposing individual corporations that he accused of shutting down U.S. factories and moving production overseas to cut labor costs. Yet as a 2004 Columbia Journalism Review article, The Two Faces of Lou Dobbs, documented, many of the same corporations criticized on Dobbs’s “Exporting America” site were praised by Dobbs in his now-cancelled exclusive investment newsletter, Lou Dobbs Money Letter. In his Money Letter, Dobbs offered paid subscribers tips on investments, typically going “out of his way to praise [the companies he recommended] as good corporate citizens,” according CJR‘s Zachary Roth.

As Roth noted in his June 2004 article, some of the companies featured in the Lou Dobbs Money Letter, under the heading ‘doing good business with good people,’ would be familiar to the audience of Dobbs’s “Exporting America.” In fact, CJC found that of the 14 companies Dobbs highlighted for investors in his newsletter in 2003-4, eight appeared during the same timeframe on his CNN website as companies that outsourced jobs.

It is perhaps not surprising that Dobbs is being offered a position at the Fox Business Network. After all, being an embarrassment to the journalism profession has never been an impediment to landing a job at Fox. And two of the special talents Dobbs demonstrated at CNN, fearmongering about immigrants and entertaining racist conspiracy theories about Obama’s birth certificate, may even be prerequisites to getting one’s own show at Murdoch’s News Corp empire.

But even so. As Media Matters, America’s Voice and Lulac commented in a recent press release, “Lou Dobbs does not deserve a platform on any television network – even one with ratings as low as Fox Business Network.”

Isabel MacDonald is a Montreal-based freelance journalist. She can be reached at isabelmacdonald1 at gmail.co. Follow her on Twitter: www.twitter.com/isabelmacdo