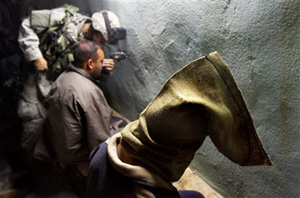 Innocence, as defined by law, makes us complicit with the crimes of the state. To do nothing, to be judged by the state as an innocent, is to be guilty. It is to sanction, through passivity and obedience, the array of crimes carried out by the state.

The steady impoverishment and misery inflicted by the corporate state on the working class and increasingly the middle class has a terrible logic. It consolidates corporate centers of power. It weakens us morally and politically. The fraud and violence committed by the corporate state become secondary as we scramble to feed our families, find a job and pay our bills and mortgages. Those who cling to insecure, poorly paid jobs and who struggle with crippling credit card debt, those who are mired in long-term unemployment and who know that huge medical bills would bankrupt them, those who owe more on their houses than they are worth and who fear the future, become frightened and timid. They seek only to survive. They accept the pathetic scraps tossed to them by the corporate elite. The internal and external corporate abuse accelerates as we become every day more pliant.

Our corrupt legal system, perverting the concept that “all men are created equal,” has radically redefined civic society. Citizens, regardless of their status or misfortune, are now treated with the same studied indifference by the state. They have been transformed from citizens to commodities whose worth is determined solely by the market and whose value is measured by their social and economic functions. The rich, therefore, are rewarded by the state with tax cuts because they are rich. It is their function to monopolize wealth and invest. The poor are supposed to be poor. The poor should not be a drain on the resources of the state or the oligarchic elite. Equality, in this new legal paradigm, means we are all treated alike, no matter what our circumstances. This new interpretation of equality, under which the poor are abandoned and the powerful are unchecked, has demolished the system of regulations, legal restraints and services that once protected the underclass from wealthy and corporate predators.

The creation of a permanent, insecure and frightened underclass is the most effective weapon to thwart rebellion and resistance as our economy worsens. Huge pools of unemployed and underemployed blunt labor organizing, since any job, no matter how menial, is zealously coveted. As state and federal social welfare programs, especially in education, are gutted, we create a wider and wider gulf between the resources available to the tiny elite and the deprivation and suffering visited on our permanent underclass. Access to education, for example, is now largely defined by class. The middle class, taking on huge debt, desperately flees to private institutions to make sure their children have a chance to enter the managerial ranks of the corporate elite. And this is the idea. Public education, which, when it functions, gives opportunities to all citizens, hinders a system of corporate neofeudalism. Corporations are advancing, with Barack Obama’s assistance, charter schools and educational services that are stripped down and designed to train classes for their appropriate vocations, which, if you’re poor means a future in the service sector. The eradication of teachers’ unions, under way in states such as New Jersey, is a vital component in the dismantling of public education. Corporations know that good systems of public education are a hindrance to a rigid caste system. In corporate America everyone will be kept in his or her place.

The beating down of workers, exacerbated by the prospect that unemployment benefits will not be renewed for millions of Americans and that public sector unions will soon be broken, has transformed those in the working class from full members of society, able to participate in its debates, the economy and governance, into terrified people in fragmented pools preoccupied with the struggle of private existence. Those who are economically broken usually cease to be concerned with civic virtues. They will, history has demonstrated, serve any system, no matter how evil, and do anything for a salary, job security and the protection of their families.

There will be sectors of the society that, as the situation worsens, attempt to rebel. But the state can rely on a huge number of people who, for work and meager benefits, will transform themselves into willing executioners. The reconfiguration of American society into a corporate oligarchy is conditioning tens of millions not only to passively accept state and corporate crimes, but to actively participate in the mechanisms that ensure their own enslavement.

“Each time society, through unemployment, frustrates the small man in his normal functioning and normal self-respect,” Hannah Arendt wrote in her 1945 essay “Organized Guilt and Universal Responsibility,” “it trains him for that last stage in which he will willingly undertake any function, even that of hangman.”

Organs of state repression do not rely so much on fanatics and sadists as ordinary citizens who are desperate, who need a job, who are willing to obey. Arendt relates a story of a Jew who is released from Buchenwald. The freed Jew encountered, among the SS men who gave him certificates of release, a former schoolmate, whom he did not address but stared at. The SS guard spontaneously explained to his former friend: “You must understand, I have five years of unemployment behind me. They can do anything they want with me.”

Arendt also quotes an interview with a camp official at Majdanek. The camp official concedes that he has assisted in the gassing and burying of people alive. But when he is asked, “Do you know the Russians will hang you?” he bursts into tears. “Why should they? What have I done?” he says.

I can imagine, should the rule of law ever one day be applied to the insurance companies responsible for the deaths of tens of thousands of Americans denied medical care, that there will be the same confused response from insurance executives. What is frightening in collapsing societies is not only the killers, sadists, murderers and psychopaths who rise up out of the moral swamp to take power, but the huge numbers of ordinary people who become complicit in state crimes. I saw this during the war in El Salvador and the war in Bosnia. It is easy to understand a demented enemy. It is puzzling to understand a rational and normal one. True evil, as Goethe understood, is not always palpable. It is “to render invisible another human consciousness.”

Alexander Solzhenitsyn in his book “The Gulag Archipelago” writes about a close friend who served with him in World War II. Solzhenitsyn’s defiance of the Communist regime after the war saw him sent to the Soviet gulags. His friend, loyal to the state, was sent there as an interrogator. Solzhenitsyn was forced to articulate a painful truth. The mass of those who serve systems of terrible oppression and state crime are not evil. They are weak.

“If only there were vile people … committing evil deeds, and if it were only necessary to separate them from the rest of us and destroy them,” Solzhenitsyn wrote. “But the line dividing good and evil cuts through the heart of every human being. And who is willing to destroy a piece of his own heart?”

The expansions of public and private organs of state security, from Homeland Security to the mercenary forces we are building in Iraq and Afghanistan, to the burgeoning internal intelligence organizations, exist because these “ordinary” citizens, many of whom are caring fathers and mothers, husbands and wives, sons and daughters, have confused conformity to the state with innocence. Family values are used, especially by the Christian right, as the exclusive definition of public morality. Politicians, including President Obama, who betray the working class, wage doomed imperial wars, abandon families to home foreclosures and bank repossessions, and refuse to restore habeas corpus, are morally “good” because they are loyal husbands and fathers. Infidelity, instead of corporate murder, becomes in this absurd moral reasoning the highest and most unforgivable offense.

The bureaucrats who maintain these repressive state organs, who prosecute the illegal wars in Iraq and Afghanistan or who maintain corporate structures that perpetuate human suffering, can define themselves as good—as innocent—as long as they are seen as traditional family men and women who are compliant to the laws of the state. And this redefinition of civic engagement permits us to suspend moral judgment and finally common sense. Do your job. Do not ask questions. Do not think. If these bureaucrats were challenged for the crimes they are complicit in committing, including the steady dismantling of the democratic state, they would react with the same disbelief as the camp guard at Majdanek.

Those who serve as functionaries within corporations such as Goldman Sachs or ExxonMobil and carry out crimes ask of their masters that they be exempted from personal responsibility for the acts they commit. They serve corporate structures that kill, but, as Arendt notes, the corporate employee “does not regard himself as a murderer because he has not done it out of inclination but in his professional capacity.” At home the corporate man or woman is meek. He or she has no proclivity to violence, although the corporate systems they serve by day pollute, impoverish, maim and kill.

Those who do not carry out acts of rebellion, no matter how small or seemingly insignificant, are guilty of solidifying and perpetuating these crimes. Those who do not act delude themselves into believing they are innocent. They are not.

Chris Hedges is a senior fellow at The Nation Institute and a weekly columnist for Truthdig. His newest book is “Death of the Liberal Class.” On Dec. 16 he, Daniel Ellsberg, Medea Benjamin, Ray McGovern, Dr. Margaret Flowers and several others will hold a rally across from the White House to protest the wars in Iraq and Afghanistan and attempt to chain themselves to the White House fence.  More information on the Dec. 16 protest can be found at www.stopthesewars.org.