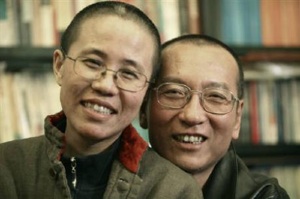 At the awarding of the Nobel Peace Prize to Chinese dissident Liu Xiaobo in Oslo today, Thorbjørn Jagland, chairman of the Norwegian Nobel Committee, emphasized the centrality of nonviolence to Liu’s thought and work:

Liu was born on the 28th of December 1955 in Changchun in China’s Jilin province. He took a Bachelor’s degree in literature at Jilin University, and a Master’s degree and a PhD at Beijing Normal University, where he also taught. Stays abroad included visits to Oslo, Hawaii, and Columbia University, New York.

In 1989 he returned home to take part in the dawning democracy movement. On the 2nd of June he and some friends started a hunger strike on Tiananmen Square to protest against the state of emergency that had been declared. They issued a six-point democratic manifesto, written by Liu, opposing dictatorship and in favour of democracy. Liu was opposed to any physical struggle against the authorities on the part of the students; he tried to find a peaceful solution to the tension between the students and the government. Non-violence was already figuring prominently in his message. On the 4th of June he and his friends tried to prevent a clash between the army and the students. He was only partially successful. Many lives were lost, most of them outside Tiananmen Square.

Liu has told his wife that he would like this year’s Peace Prize to be dedicated to “the lost souls from the 4th of June.” It is a pleasure for us to fulfil his wish.

Liu has said that “The greatness of non-violent resistance is that even as man is faced with forceful tyranny and the resulting suffering, the victim responds to hate with love, to prejudice with tolerance, to arrogance with humility, to humiliation with dignity, and to violence with reason.”

Neither Liu himself nor his wife were permitted to leave China to accept the prize. Behind Jagland, on the stage, were two empty seats.

This article was originally  published on WagingNonviolence.org.