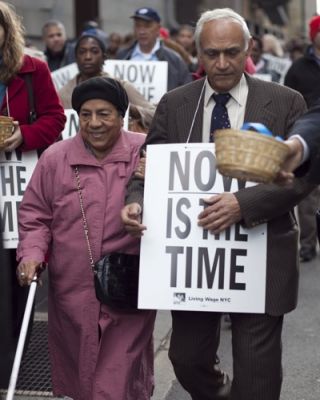 The Queens Center Mall in Elmhurst received $48 mil­lion in city tax breaks from 2004 to 2009 and is rated as one of the 10 most profitable malls in the country. It’s bustling with activity again this holiday season, yet most of the 3,100 workers in the mall’s 70 stores earn at or near the minimum wage.

“The amount I’m making is not enough to support my family,” said Larry, a 48-year-old father who works as a full-time sales associate at a JC Penney store in the mall, earning $8.96 an hour after his healthcare costs are deduct­ed. Larry, who asked that his real name not be used, has been working at JC Penney for six years and lives in a small apartment in Lefrak City, Queens. His earnings support his wife, who is unable to find work, and his 8-year-old child. “I have to pay for their basic needs, like food and rent, and it’s always a struggle.” Workers like Larry may not have to worry much longer. Labor, community and religious groups from all five bor­oughs have formed Living Wage NYC, a coalition to achieve living wages for workers whose jobs are created through eco­nomic development subsidies — tax breaks and other forms of city assistance that supports development projects simi­lar to the Queens Center Mall. Implementing higher wage standards in subsidized developments will have a significant impact on retail and food workers throughout New York.

Leading members of this coalition include the Retail, Wholesale and Department Store Union (RWDSU), the Northwest Bronx Community and Clergy Coalition (NW­BCC), and the Micah Institute at New York Theological Seminary.

STRAIGHT FROM THE BRONX

The coalition emerged from a hard-fought battle against the Bloomberg administration’s plan to convert the Kingsbridge Armory, a hulking 575,000-square-foot structure in the northwest Bronx, into a poverty-wage shopping mall. The project’s lead developer, the Related Companies, was slated to receive more than $60 million in taxpayer subsidies for the $310 million project.

In December 2009, the City Council voted 45-to-1 to re­ject the planned redevelopment of the Armory after Mayor Michael Bloomberg refused to allow Related to negotiate with community and labor leaders over the terms of a Com­munity Benefits Agreement, which included living wage jobs, local hiring, community and recreation space, money for affordable housing, the exclusion of a big box grocery store, and the protection of the right of retail workers to join a union without intimidation.

This in turn catalyzed a citywide movement for living wage jobs at city-subsidized developments. With momen­tum from the struggle in the Bronx, Council Members Oliver Koppell (D-WFP-Kingsbridge) and Annabel Palma (D-WFP-Parkchester) introduced the Fair Wages for New WFP-Parkchester) introduced the Fair Wages for New Yorkers Act in May and a majority of City Council members now supports the pro­posed ordinance. The measure would require all projects that receive more than $100,000 in city support to provide jobs that pay at least $10 per hour plus healthcare benefits or $11.50 per hour without benefits.

“With our tax dollars, this city is funding these mega-developments that are attacking our communities. They’re displacing us and they’re keeping us poor,” said Maisha Mo­rales of Families United for Racial and Eco­nomic Equality (FUREE), a Living Wage NYC coalition member. “It’s only fair that these developers pay living wages.”

Since 1999, the city has provided upwards of $1 billion in tax breaks and subsidies to shopping centers, sports stadiums and office buildings (see sidebar) that are not required to provide living wages to the service work­ers who labor in them. And Mayor Bloomberg appears to like it that way. In fact, the mayor, whose fortune climbed to $18 billion last year, argues that establishing a living wage is tanta­mount to communism.

“I’ve always wanted to let the market­place set the wages,” he told the New York Daily News in September. “Government should not be in the business of doing that. The last government that tried that doesn’t exist anymore. That was the Soviet Union.”

The Bloomberg administration has re­sponded to the living wage campaign by allocating $1 million for a study of the proposed ordinance headed by a pair of economists, David Neumark and Daniel Hamermesh, who are among the nation’s most vociferous critics of living wage laws. The Bloomberg administration continues to ignore evidence including studies by the Brennan Center for Justice and the Cen­ter for American Progress (CAP) showing that cities have successfully incorporated living wage standards into economic de­velopment projects without harming job growth. The CAP study covered cities as large as Los Angeles and as small as Du­luth, Minnesota.

“Higher wages leads to more spending in the local economy, more tax dollars for the city, and fewer costs associated with providing public assistance,” said John Petro, an urban policy analyst at the Drum Major Institute for Public Policy. “Creating low-wage jobs, on the other hand, does nothing to move families out of poverty and off public assistance.” 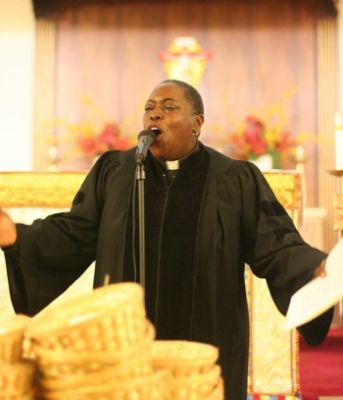 On the weekend of Oct. 10, congregants at more than 80 houses of worship across the city heard pro-living wage messages during services and were asked to sign cards urging their Councilmembers to sign onto the bill. On Nov. 17, clergy led a silent procession to City Hall to deliver thousands of cards expressing support for the living wage ordinance.

“Wages are like education: when you don’t have enough of it, the community is destroyed,” said Rev. Dr. Robert M. Wa­terman of the Antioch Baptist Church of Brooklyn, and one of the faith leaders in the Living Wage NYC coalition. “Passing this living wage legislation is important to ev­erybody and would raise the wage standards for all of our communities,” he added.

Twenty-eight out of 51 City Council members now support the bill and coali­tion members are working to gain a veto-proof majority of 34 supporters. They will also need to win over Council Speaker Christine Quinn who controls whether the proposed ordinance ultimately comes to a vote. Quinn has remained non-committal to date.

Living wage supporters will continue mobilizing in 2011 starting with a Martin Luther King, Jr. Day event at Convent Bap­tist Church in Harlem on Jan. 13. The event will honor Dr. King’s legacy as a leader in the struggle for living wages for sanitation workers in Memphis in 1968.

For workers like Larry who have worked in retail for years and can barely provide ba­sic necessities for themselves and their kids, a living wage job would make all the differ­ence in the world.

“If my co-workers and I had a good job with benefits, we would be able to pay our bills, pay rent and put food on the table for our families,” said Larry. “If everyone in New York could make at least $10 per hour, it would make a huge difference for all of us.”

Diane Krauthamer is a communications as­sistant at the Retail, Wholesale and Depart­ment Store Union.

Some people benefit more than others from the city’s economic development subsidies:

Opened in 2009, this $2.3 billion baseball palace is the most expensive sports stadium in the United States and has received $1.2 billion in city, state and federal tax subsidies. The Yankees will also save hundreds of millions of dollars in the future thanks to a friendly tax loophole that exempts the team from ever having to pay property taxes on the site. The stadium’s 4,400 mostly seasonal employees make an average of $9 an hour.

Located 10 blocks south of Yankee Stadium at the former Bronx Terminal Market, this mall has received more than $10 million in subsidies. Roughly 1,300 workers are employed at stores such as Target, Home Depot, BJ’s,Best Buy, Bed Bath and Beyond, and the like. The average starting wage is estimated to be $8.80 an hour.

Low wages go with the low temperatures at the online grocer’s distribution hub in Long Island City. While Fresh Direct has received $2.8 million in income and property tax breaks from the city over the past decade and is slated to receive $12 million more, most of its more than 1,600 employees earn less than $25,000 per year. More than 75 percent of these workers start at minimum wage. Fresh Direct has also been heavily criticized for using hardball tactics to prevent its workers from unionizing.