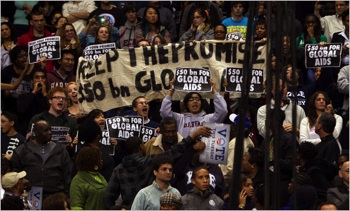 Last week, in acknowledgment of World AIDS Day, the New York Times ran a piece about a new breed of AIDS activism:

Roughly a quarter-century after gay men rose up to demand better access to H.I.V. medicines, a new breed of AIDS advocate is growing up on college campuses. Unlike the first generation of patient-activists, this latest crop is composed of budding public health scholars. They are mostly heterosexual. Rare is the one who has lost friends or family members to the disease. Rather, studying under some of the world’s most prominent health intellectuals, they have witnessed the epidemic’s toll during summers or semesters abroad, in AIDS-ravaged nations like Rwanda, Tanzania and Uganda.

College activism, and AIDS activism in particular, is nothing new. On Wednesday, World AIDS Day, students across the nation will participate in speeches, fund-raisers and the like. But a loose-knit band of about two dozen Ivy Leaguers, mostly from Harvard and Yale, is using more confrontational tactics, as well as some high-powered connections, to wangle encounters with top White House officials in a determined, and seemingly successful, effort to get under Mr. Obama’s skin.

Their protests — which have drawn a sharp rebuke from the president (not to mention some disapproving parents) — come as many in the AIDS advocacy community are wondering aloud whether Mr. Obama is as devoted to their cause as his immediate predecessor, George W. Bush.

The Times focused on the efforts of one Yale student, David Carel, who heckled President Obama at a Democratic campaign rally in October and recently sparred with bioethicist and health adviser to the president Ezekial Emanuel at a campus event. Like his obstinate brother Rahm, Emanuel heartily defended the half-efforts of the President.

“To be honest, and this is no put-down to the sincerity of the students, I didn’t hear a new argument that I haven’t heard for months,” Dr. Emanuel said in an interview after his breakfast with Mr. Carel. “I’ve not seen a blog post on the number of people we have circumcised, or the number of mothers we treat in maternal-child health. Those are real performance measures.”

Dr. Emanuel would not discuss any conversations with the president about the students, but Mr. Obama’s reaction when he was disrupted in October at the rally in Bridgeport made clear he was irked. “You’ve been appearing at every rally we’ve been doing,” the president complained, telling them it was not “a useful strategy.”

While it is certainly worth debating the effectiveness of a verbally abrasive approach, the students did manage to elicite a response—albeit negative—from the president, which is far more than most activists get. Perhaps, now that they have his ear, they can try out a more inviting tactic—one that does recognize the laudable efforts Obama has made toward fighting AIDS, but continues to underscore the urgency for bolder action. The heckling incident was afterall Carel’s first demonstration. And though he and his fellow protesters insist they thought long and hard about it, this is clearly a learning experience. With the level of commitment they’ve already exhibited at such a young age, it will be interesting to watch them fine-tune their approach in the years to come.

This article was originally posted on Waging Nonviolence.