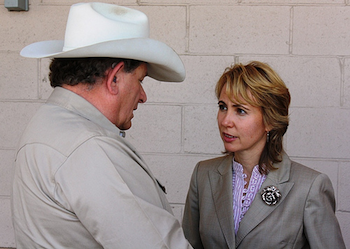 Perhaps not since the full-on throes of the Civil Rights era has a single state been so beset by crisis, conflict, and now catastrophe. Chronicling Arizona politics has been a trying and tiresome experience on many levels, with few points of optimism at hand to buffet the constant blows of injustice and brutality. The open persecution of people of color at the level of both bodies and minds; the outright hijacking of the state’s politics by far-right figures with white supremacist ties; the bankrupting of the economy while private interests gain tax breaks and write favorable laws for themselves; the decimation of the public infrastructure including the education and healthcare systems — all of this and more has been front and center for beleaguered Arizonans in recent years.

Today, with the tragic shooting of Democratic Congresswoman Gabrielle Giffords and a Federal Judge who had previously been the target of anti-immigrant protesters, among perhaps a dozen other victims, we have before us a sobering reminder of the political “climate of fear” that has been fostered by certain demagogic elements here in Arizona. While I remain committed to the challenge of finding the positive news in the daily cycle, reality nonetheless intrudes and at times demands our attention. This is one of those instances, and if there is any justice to be found in this madness, perhaps it will finally provide the impetus for us all to move beyond the politics of fear and rage. As Matt Bai has opined in the New York Times, “the question is whether Saturday’s shooting marks the logical end point of such a moment [of rhetorical recklessness] — or rather the beginning of a terrifying new one.”

Time will tell, but if recent events are any indication, it will be an uphill struggle that is not merely confined to Arizona. “Even before the shooting of a U.S. congresswoman on Saturday, the state of Arizona was in the throes of a convulsive political year that had come to symbolize a bitter partisan divide across much of America,” writes David Schwartz for Reuters. “I feel huge sorrow, that’s just been building in southern Arizona for some time, this hate, hate, fear, somewhat around SB 1070, somewhat around healthcare reform. It definitely heated up when President Obama was elected,” said Molly McKasson Morgan, 63, who participated in Tucson politics and knew Giffords. “It’s never been this angry, it’s never been this divisive,” said Alfredo Gutierrez, a former state lawmaker.

These trends of divisiveness and open hostility have been manifesting for some time here. Following the passage of SB 1070 and approaching its date of implementation last July, I observed the growing tendency toward violence and its unabashed cultivation:

“One of the unspoken tragedies and implicit intentions of Arizona’s anti-immigrant law, SB 1070, is the promotion of a climate of fear among certain segments of the population. This fear-mongering strategy has been cooked up by the bill’s leading proponents and most likely beneficiaries: the governor, rightwing state legislators, and an unscrupulous sheriff who shall remain nameless…. Fostering an environment of racialized violence is the harsh reality of Arizona’s drive toward legislated intolerance. For those who might feel saturated by the incessant news about immigration, or who wonder ‘what’s the big deal?’ about SB 1070 and the like, this is a reminder of the stakes involved. Will there be a climate of escalating fear, hatred, and violence that takes over, or will this be a tipping point toward social justice and human dignity instead? Politics and legalities aside, this is the basic question that the Arizona dilemma is posing to the nation….”

Whether or not it turns out that the gunman in the Giffords shooting was politically motivated, the overall climate in which it occurred cannot be dismissed, and a recitation of some of the key background details is essential for a fuller understanding. For one, John M. Roll, the federal judge killed in the shooting, had been at the center of the state’s complicated political battle over immigration. In February 2009, he received hundreds of threats after he allowed a lawsuit filed by illegal immigrants against a rancher to go forward. “They cursed him out, threatened to kill his family, said they’d come and take care of him. They really wanted him dead,” a law enforcement official told The Washington Post in May 2009. While there is no indication at this point that Roll was the gunman’s main target, it is telling that he was in proximity on the fateful day and that he himself had previously been harassed for a perceived pro-immigrant bent.

The suspect in the shootings has been identified as 22-year-old Jared Lee Loughner of Tucson. He had an apparent preoccupation with “literacy” rates (which could be a veiled reference to ethnicity), and in online profiles listed among his favorite books Mein Kampf and The Communist Manifesto. In a recent YouTube video, Loughner described himself as a U.S. military recruit who had recently filled out an application to join the Army. In a message posted on his MySpace account, titled “Goodbye friends,” he said: “Dear friends … please don’t be mad at me. The literacy rate is below 5%. I haven’t talked to one person who is literate.” In a rambling YouTube message referring to a new currency, Loughner stated: “I know who’s listening: Government Officials, and the People. Nearly all the people, who don’t know this accurate information of a new currency, aren’t aware of mind control and brainwash methods. If I have my civil rights, then this message wouldn’t have happened.” There are conflicting reports about whether he acted alone, although Pima County Sheriff Clarence Dupnik has noted that investigators are “not convinced” that he did, according to a report by the New York Post. Dupnik says that Loughner may have come to the parking lot with another person who was “in some way involved,” and poignantly lamented that Arizona has “become the Mecca for prejudice and bigotry.”

Giffords’ Tucson office was vandalized last March after she voted in favor of President Obama’s controversial healthcare bill. She had been named as a campaign target for conservatives in last November’s elections by Sarah Palin for her strong support of Obama’s initiatives. Palin infamously published a “target map” on her website using images of gun sights to identify 20 House Democrats, including Giffords, for backing the healthcare law. The map used actual target markers on locations where these Democrats lived, and listed their names. “We’re on Sarah Palin’s targeted list, but the thing is, that the way that she has it depicted has the crosshairs of a gun sight over our district. When people do that, they have to realize that there are consequences to that action,” Giffords said in an interview with MSNBC last March. “We’ve had hundreds and hundreds of protesters over the course of the last couple of months,” she said. “Our office corner has really become an area where the Tea Party movement congregates and the rhetoric is really heated. Not just the calls but the e-mails, the slurs.”

At an event in 2009, which was similar to the one Giffords was holding at the time of the shooting, a protester was removed by police when his pistol fell to the supermarket floor. Giffords’ Republican opponent in the November 2010 congressional race, Tea Party candidate Jesse Kelly, was criticized for a campaign event he held at a shooting range, advertised with the words “Get on Target for Victory in November,” “Help remove Gabriel Giffords from office,” and “Shoot a fully automatic M16.” Giffords narrowly won reelection to her third term in the House of Representatives — and during the course of the campaign it was revealed that she was one of three Democrats in the nation to receive contributions from MSNBC host Keith Olbermann, resulting in the newscaster’s temporary suspension from the network.

After the shooting, Giffords’ father told the New York Post, when asked if his daughter had enemies, “Yeah, the whole Tea Party.” He added that politicians constantly face danger. “They always get threatened,” he said, sobbing. According to a report by The Hill, Tea Party Nation founder Judson Phillips condemned the attacks, but warned supporters that the Tea Party movement would be blamed by political opponents. “While we need to take a moment to extend our sympathies to the families of those who died, we cannot allow the hard left to do what it tried to do in 1995 after the Oklahoma City bombing,” he said. The Tucson Citizen’s “Three Sonorans” blog further reports that the building housing the Mexican-American Studies program at the University of Arizona was vandalized at almost the same time as the shootings occurred, and that Judge Roll had recently been assigned to hear the lawsuit challenging Arizona’s new law (HB 2281) banning Ethnic Studies. Authorities were also called later that evening to Giffords’ office as vigilers assembled there, when a suspicious package was removed and secured by the bomb squad, according to an Associated Press report.

For her part, Giffords has been a strong proponent of solar energy, and has generally been known as a moderate to conservative Democrat among Arizona’s Republican-dominated congressional delegation. Giffords was first sworn in as a Representative on January 3, 2007, and is the first Jewish woman and third woman overall in Arizona’s history to be elected to serve in Congress. In her first month in office, Giffords voted to support increased federal funding for embryonic stem-cell research, raise the minimum wage, endorse the recommendations of the 9/11 Commission, and adopt new rules for the House of Representatives targeting ethical issues. Giffords also voted to repeal subsidies to big oil companies and invest the savings in renewable energy. She is a member of the House LGBT Equality Caucus and has been noted as “a strong supporter of gay rights.” She also advocated for the repeal of $14 billion in subsidies to oil companies in favor of renewable energy subsidies and the establishment of a Strategic Renewable Energy Reserve to increase research in clean energy, develop greater efficiency, and improve conservation. Giffords has supported stronger border enforcement and comprehensive immigration reform as well. She is the only member of Congress whose spouse, astronaut Mark E. Kelly, is an active duty member of the military.

“I am a third generation southern Arizonan and I went off to school, was working for Price Waterhouse in New York City, and was asked to come home to run my family’s tire and automotive business,” said Giffords in a 2007 C-SPAN interview. “I first got involved with politics frankly because I was frustrated when I was opening up my newspaper every single morning and seeing my great state of Arizona continuing to be at the bottom, whether it be poor-people funding, or mental health funding, or making sure that we could preserve our beautiful open spaces — and in life you can either complain about something or you can try to fix it so I decided to run for political office….”

Details about this situation continue to unfold, but some things are eminently clear. We can continue in this downward spiral of vitriol, fear, and hatred, or we can turn the corner and begin working toward values of community, inclusivity, and equality. On the one hand lies our imminent destruction; on the other our potential salvation. If this tragedy is to have meaning in this moment of utter senselessness, then we must opt for the latter — not just in Arizona, or even merely America, but for all the peoples of the world. For today, though, I simply want to express my deepest condolences to all of the families affected by this heartbreaking episode, and likewise to all Arizonans struggling to find cause for hope in these times of ongoing despair.

Randall Amster, J.D., Ph.D., teaches Peace Studies at Prescott College, and is the Executive Director of the Peace & Justice Studies Association. His most recent book is Lost In Space: The Criminalization, Globalization, and Urban Ecology of Homelessness (LFB Scholarly 2008).