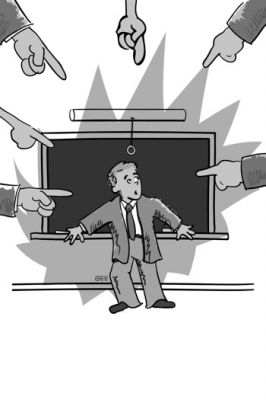 Should firemen be held accountable when a building burns down? Should individual soldiers in Afghanistan be compared to each other on the basis of “suc­cess” or “failure” in controlling the Taliban in a given area?

Any effort to do so would spark a major outcry. But when it comes to teaching, there is a different standard. On Jan. 10, Manhattan Supreme Court Justice Cynthia Kern ruled that the New York City Department of Education (DOE) was obliged to release the names of individual teachers with “value-added” test score results that purport to measure teacher effectiveness. Judge Kern brushed aside arguments by the United Federation of Teachers (UFT) that the release of unreliable data would unjustly harm teachers’ reputations writing “there is no requirement that data be reliable for it to be disclosed.”

The value-added methodology attempts to measure teachers according to how much their students scores on standardized tests improve or decline year to year.

The data dump will affect more than 12,000 classroom educators in Grades 4 to 8. The UFT is expected to appeal. There is some irony here, as the UFT signed off on the use of value-added scores in the first place after former Schools Chancellor Joel Klein promised the results would not be made public.

If the value-added data is ultimately re­leased, expect a feeding frenzy as teachers are judged and shamed on an individual ba­sis in the media. The larger purpose of such a data dump by the DOE is to further erode public support for teachers and force their union to renounce a seniority-based system, just as Mayor Michael Bloomberg and his new Schools Chancellor Cathie Black are preparing to lay off thousands of teachers due to budget shortfalls.

Ironically, it was only six months ago that the state Department of Education revealed that years of test-score advances by city stu­dents had turned out to be a mirage, causing Bloomberg and Klein a good deal of embar­rassment. No matter — the mayor is ready once again to wield unreliable test scores as a political weapon, and most media in this city have deliberately short memories.

Backing for this initiative has been provided by private foundations led by billionaires like Bill Gates and Eli Broad, who assert that data-driven models from the private sector can be transferred to public schools.

Their dream of using data to accurately measure the effectiveness of individual teachers is rooted in a vision of the school as a factory in which teachers are assembly-line workers and rising student test scores equal rising workforce productivity. At long last, value-added supporters claim, good teachers will be rewarded and the poor ones forced to improve for fear of losing their jobs.

In reality, value-added measures are seri­ously flawed. They don’t fully account for external circumstances, such as poverty or family turmoil, that can affect a child’s per­formance. Nor can they account for the fact the same child can take tests on different oc­casions and under different conditions and the results will differ.

A study by Mathematica Policy Research done for the U.S. Department of Education showed that one-fourth of average teachers will be mistakenly identified for special re­wards. At the same time, one-fourth of teach­ers who differ from average performance by three to four months of student learning will be overlooked.

A recent study by Sean Corcoran of NYU demonstrated that the New York City teach­er data reports have an average margin of error of 34 to 61 percentage points out of 100. The National Academy of Sciences has also warned of the potentially damaging consequences of implementing these unfair and inherently unreliable evaluation sys­tems. Even the NYC DOE’s own consultants have warned against using data for teacher evaluation.

Value-added measures also provide incentives for teachers to manipulate scores by using large amounts of classroom time practicing for tests or by cheating. To the extent a teacher cuts corners one year to deliver improved test scores, a student’s next teacher will face that much greater of a challenge to deliver similar or better results.

With their very livelihoods threatened, teachers will be very careful about working with troubled children who could drag down their value-added ratings. A veteran New York City teacher who blogs under the alias of “Accountable Talk” described dealing with a request to take a class full of difficult students:

“I did something I am still not proud of. I quit,” Accountable Talk wrote. “No, I didn’t quit teaching. I just quit volunteer­ing to teach the very children who needed me most. When my AP [assistant principal] asked me to take them on again (which he would not do unless he knew I’d been suc­cessful), I said no. This year, those kids are with another teacher who has difficulty just getting them to sit in their seats.”

One of the political goals of the value-added approach is to break teacher unity by pitting them against each other. The competi­tive, zero-sum logic of the value-added system undermines the spirit of collaboration that is essential to teachers refining and developing their craft. If sharing tips with one’s fellow teachers will help them improve their value-added rankings, is it prudent to reach out to individuals with whom you are competing? The downside of a value-added approach doesn’t faze leading proponents like Eric Hanushek, a Stanford economist who has written that teachers’ scores should be made public even if they are flawed.

Several news organizations, including the New York Post, The New York Times and The Wall Street Journal, have filed Freedom of Information requests for New York City teacher test-score data. The normally secre­tive NYC DOE has been eager to comply.

Separate Is Not Equal 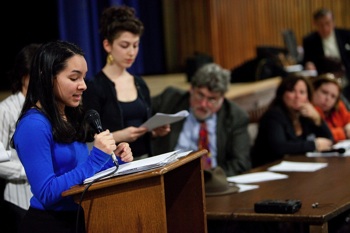 SPEAKING OUT: A student at the Secondary School for Research (SSFR), testifies during a Jan. 11 public hearing on plans announced by the city Department of Education to establish a new selective high school inside the John Jay campus building in Park Slope. SSFR and two other schools that share the building criticized the Education Department’s support for Millennium 2 High School, which will receive extra funding from outside sources. The schools already inside the building face continuing budget cuts. The DOE is looking to carry out similar school co-locations at as many as 30 campuses this year.

Public hearings are taking place across the city this month at 26 schools targeted for closure by the city. Mayor Michael Bloomberg’s hand-picked school board, the Panel for Educational Policy (PEP), will vote on the proposed closings when it meets on Feb. 1 and 3 at 6 pm. According to the Department of Education, the schools are being closed due to poor performance. Opponents of the closings say their schools have been set up to fail and should receive more support. Both PEP meetings will be held at Brooklyn Tech High School at 29 Fort Greene Place. For more, see grassrootseducationmovement.blogspot.com. Here are some upcoming hearings:

The Ad Hoc Committee to Stop School Closings & Charter Takeovers will be holding a citywide rally on Thursday, Jan. 27, at 4:30 pm at City Hall Plaza near the Brooklyn Bridge. For more, see stopschoolclosings.wordpress.com.