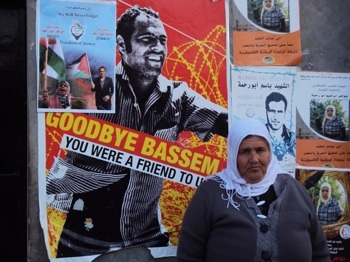 BIL’IN, West Bank — Tear gas burned my eyes and throat, and I ran for cov­er. Moments before, more than 15 of us from a solidarity delegation organized by American Jews for a Just Peace had been protesting Israel’s illegal separation bar­rier that confiscates Palestinian land. It was Jan. 7, a week after U.S.-made tear gas had killed Jawaher Abu Rahmah, a 36-year-old woman from the same village. Not to be deterred by Israeli military checkpoints and roadblocks around Bil’in, more than 100 Israelis, Palestinians and internationals par­ticipated in the demonstration against the barrier. Jawaher was on everyone’s minds, and demonstrators held up posters with the words “gas won’t tear us apart” written above photos of her face.

Just an hour before, I had been sitting in my hotel room in Ramallah. The landscape of Israel/Palestine, profoundly compact, bog­gles the mind. Different universes, ranging from siege and hardship to a bubble of nor­malcy and hope, exist simultaneously.

Ramallah, the effective capital of the West Bank, continues to be the exception to the Palestinian experience with its flourishing cafes and bars that cater to foreign business­men and aid workers — and the Palestinians who benefit from these travelers.

It also currently serves as the administrative capital for the Western-backed Palestinian Au­thority, which has grown into an increasingly repressive governing apparatus. Reminders of Palestinian resistance are confined to posters of the late leader Yasser Arafat.

Tel Aviv is another story. Far from Israel’s border towns near Gaza, where people are often reminded that Palestinians exist in the form of crude homemade rockets that do little damage, Israel’s capital is artificially idyllic. Israelis go about their daily lives, seemingly oblivious to the Palestinians liv­ing under the grinding boot of apartheid.

Then there’s Hebron, located in the southern West Bank, where more than 163,000 Pales­tinians are held hostage by 500 IDF-backed Israeli settlers. I stayed with a large Palestin­ian family there and witnessed what is often considered the flashpoint of the most intense of Israeli-Palestinian relations. Surrounded by extremist settlers, the family was forced to build a wall around their house to protect themselves from almost weekly attacks. One of my hosts, a woman in her 20s, told me that a few years ago a group of settlers hit her in the head with a rock, knocking her unconscious. Israeli checkpoints prevented the Palestinian ambulance from reaching her for two and a half hours. Her vision was impaired for months after the incident.

The Hebron settlers are mostly followers of the assassinated anti-Arab leader Rabbi Meir Kahane, who advocated the expulsion of the Palestinians. While they are by far the most extreme (and perhaps the smallest) fac­tion of settlers, they have a disproportionate amount of Israel’s support, despite the pro­testation of many left-wing Israeli activists who consider them fascists.

Israel’s foreign minister, Avigdor Lieber­man, is an illegal settler who openly calls for Palestinian citizens to be transferred out of Israel. Earlier this month, the Israeli Knesset passed a McCarthyist initiative to inves­tigate leftist Israeli groups. And the docu­mented massacre of more than 1,300 Pales­tinian civilians during Israel’s 2008-09 siege has done little to deter talk of a renewed as­sault on Gaza.

Despair and heartbreak are commonplace among the Palestinians I met. And yet, in the words and actions of Palestinians like Omar Barghouti, a leader in the Palestin­ian-led boycott, divestment and sanctions movement, there is reason for hope. It’s a sentiment echoed by Allam Jarrar, director of the Palestinian Medical Relief Society who said, “in every dark situation there is a tiny light.”

Two weeks after Jawaher’s death, I had the chance to interview her mother, Soubhi­ya. She recalled the nearly identical death of her son, Bassem, an integral part of Bil’in’s resistance to the apartheid wall. In April 2009 the IDF shot a high velocity tear-gas canister directly at Bassem’s chest.

I asked her whether she still thought it was worth protesting after two of her chil­dren died as a result. “Yes, for sure,” she answered. “When the army keeps doing this stuff, and the Israeli government steals more land, yes, for sure I support this and everybody has to do some­thing against them. We have never stopped. We will not be silent about this.”

Alex Kane is a blogger and journalist based in New York City. He blogs on Israel/Palestine and Islamophobia in the U.S. at alexbkane.wordpress.com. Follow him on Twitter @alexbkane.