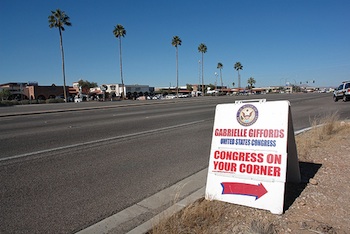 Whatever your political leanings, you’d have to be incredibly hardhearted not to be moved by the shooting in Tucson that claimed the lives of a federal judge and a nine year old girl, among others, and critically wounded Democratic Congresswoman Gabrielle Giffords. Some will attempt to politicize this episode as emblematic of the poverty of the “other side,” whereas others will seek to depoliticize it as the work of a deranged “lone gunman.” Meanwhile, moderate voices will be raised aghast at the violence in our midst, both of the rhetorical and spectacular varieties, and many will attempt to draw a direct link between the two. And still, in all likelihood, all of this will soon fade into the collective rear-view mirror and slide down the news queue, as the “normal” state of business as usual adjusts to a new equilibrium that encourages a reestablished complacency.

The inherent cynicism in this narrative is bolstered by its likely occurrence, given America’s reaction to previous calamities. Yet this episode seems different, more personal in its up-close intentions, and jarring in its depiction of innocent people gunned down at a neighborhood supermarket while practicing the elusive virtues of representative democracy in a way that will be largely unavailable going forward. For along with the victims on that Arizona tarmac lies our own innocence as well, replaced by the carefully avoided specter of our collective contributions to what Hannah Arendt once referred to as the “banality of evil.”

In this sense, we must acknowledge the blood on all of our hands. We blithely exist in a culture of violence at almost every level, from our food and entertainment to the economy and what passes for politics. The better part of our creative and pecuniary energies alike are expended on the ceaseless operations of a military machine that we service as human cogs rendered before an insatiable Moloch. As much as we are able, the cultural violence that we proliferate is exported, outsourced, externalized, and rationalized in the name of progress and exceptionalism. Within this rubric, few among us are truly evil, but are merely living our lives along predetermined lines of common virtue. There is nothing shocking or extraordinary about this; it is, after all, quite acceptably mundane.

Yet now, in this brief moment of engaged horror and empathy, it seems as if the consequences of our actions (and inactions) have “come home to roost,” so to speak. We can blame this solely on right-wing fanaticism and the irresponsible rhetoric that fans the flames of violence. We can attribute it to the overall climate that has taken hold in places like Arizona, that trial balloon of reactionary political hijacking that could portend the opening salvo in a new civil war. We can point fingers at everyone from Beck and Bush to Obama and O’Reilly, and even reserve special mention for Palin as a paragon of pusillanimous politicking. We can deliver recriminations upon the gun dealers, dope peddlers, media moguls, hate groups, and more. And we most likely will, in our search for sense where none seems to exist.

We will, in short, place blame on everyone but ourselves — even as we watch the programs and punch the ballots, buy the products and consume the cuisine, tell the jokes and repeat the slurs, drive the cars and close the gates. Moderates will call for peace and civility, and we will nod in thankful agreement. Moments of silence and memorial remembrances will bring a lump to our throats and a tear to our eyes, even as the flag of national expediency slowly subsumes the genuine emotions of compassion and fear. Most of us will say and do all the right things, except the one thing that most needs doing: healing the wounds, not merely by dressing them, but also by undoing the capacity and desire to inflict them again.

This is not a call for restoring the tepid peace of complicity. Nor is it a wishful longing that people will suddenly become nice and pathologies instantly cured. We are not going to dismantle all the weapons of war and melt down the multitudes of guns any time soon. Conflicts of all sorts will be with us as long as we draw breath, both individually and civilizationally speaking. No, this is not a plea for moderation and placidity — in fact, precisely the opposite.

What I am suggesting here is a sober assessment of the task and an honest appraisal of our shared wounds. The starting point must be a deep recognition that it is us – and not just “them” — who kill people, including ourselves, as surely as if we had pulled the trigger in a crowded public place. We do it silently, remorselessly, and without expectation of punishment (indeed, the better we are at it, the more likely we are to be rewarded). The cultural ethos of competition, domination, consumption, and disposability pits us not only against one another, but against the life-giving properties of the habitat itself. As such, our wounds of trauma and tribulation are largely self-inflicted, not the products of the deranged among us but rather those of the perfectly sane.

Thomas Merton reflected on this theme in the context of warfare, concluding that it is actually an overabundance of rationality more so than its lack that makes violence possible. When we suborn violence, either tacitly or overtly, as a mechanism for accomplishing everything from a good dinner to global dominion, we merely sanction its use by others as a tool for achieving whatever aim they may deem desirable. When we allow the structural violence of gross inequity and caste-based marginalization to pervade unchallenged, we thereby encourage others to divide and conquer as well. Rational beings will take heed as aggression is rewarded and cooperation denigrated, and duly note that success is measured by how much one possesses vis-a-vis others in the relentless zero-sum contest of modern life.

Despite this accumulated cultural baggage, we can and must heal the wounds of this violence in our midst — not by burying it or displacing it, but by owning it and learning to live with it. Just as the hardware of destruction will not be abolished in any short-term reality, nor will the software of hatred, fear, aggression, and despair suddenly vanish. The question is whether we can acknowledge these capacities without exacerbating them, and likewise whether we will be able to accept the challenge of keeping the literal and metaphorical weapons of violence with us always as reminders of that which we have consciously decided to reject. This, then, is the imminent and paradoxical task before us: to retain our inherent ability to inflict harm on ourselves, others, and the world, and yet in the process create a culture that renders anathema the utility and desirability of doing so.

Others before us have faced similar dilemmas. Now, with the virtue of clarity inspired by tragedy, we have a unique opportunity to embrace another vision. We can and must make this a great turning, away from a culture forever reacting to self-inflicted wounds and toward one that grows stronger and more mature with each passing challenge. It will be the greatest test ever faced by humankind, and it is entirely necessitated by the staggering power we have attained to undermine our very existence. Still as yet unrealized is an equally vast capacity to promote well-being at all levels through our compassion, innovation, and recognition of the other in ourselves.

Which path will we choose? Herein lies the cultural crucible broached by the Arizona shootings, namely the shared opportunity to avoid self-destruction and instead embrace mutually-assured survival. Our collective healing hangs precariously in the balance, and awaits our overdue engagement with its transformative potential.

Randall Amster, J.D., Ph.D., teaches Peace Studies at Prescott College, and is the Executive Director of the Peace & Justice Studies Association. His most recent book is Lost in Space: The Criminalization, Globalization, and Urban Ecology of Homelessness (LFB Scholarly, 2008).

This article was originally published on NewClearVision.com.