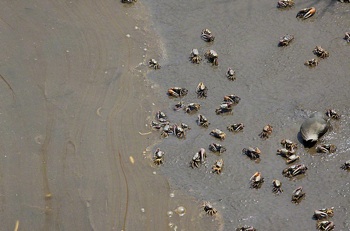 Despite BP having capped its well in the Gulf of Mexico in July, the health-related after-effects of the disaster subsist.

Gulf Coast residents and BP cleanup workers have linked the source of certain illnesses to chemicals present in BP’s oil and the toxic dispersants used to sink it – illnesses that appear to be both spreading and worsening.

Dr. Rodney Soto, a medical doctor in Santa Rosa Beach, Florida, has been testing and treating patients with high levels of oil-related chemicals in their blood stream. These are commonly referred to as Volatile Organic Compounds (VOC’s). Anthropogenic VOC’s from BP’s oil disaster are toxic and have negative chronic health effects.

Dr. Soto is finding disconcertingly consistent and high levels of toxic chemicals in every one of the patients he is testing.

“I’m regularly finding between five and seven VOCs in my patients,” Dr. Soto told Al Jazeera. “These patients include people not directly involved in the oil clean-up, as well as residents that do not live right on the coast. These are clearly related to the oil disaster.”

Lloyd Pearcey, from Bonsecour, Alabama, worked on a BP clean-up team as a foreman for four months.

During that time, he collected oil-soaked boom and drove a bulldozer “filled with the tar balls and tar mats we collected. Other times we stood in the water in Tyvek suits putting out shore boom with oil all over us. The fumes got to you.”

“I just got my results from the blood tests,” Pearcey told Al Jazeera, “I have the chemicals of the oil and dispersants in my blood.”

Pearcey had experienced many of the now common symptoms of acute exposure to BP’s chemicals.

Dr. Soto is testing his patients, and said he has ample documentation attesting to the levels of toxins people are being exposed to.

Dr. Soto classifies two types of symptom groups: acute exposure that includes skin and respiratory problems; and a second, larger group of people with no symptoms, but who still have toxicity. He believes the pathways of exposure occur through air, skin, and contaminated seafood.

One of the more extreme cases he treated was a woman who developed acute respiratory problems after a visit to the beach.

“This is a young woman in good health, with good nutritional intake, no health issues, hates to take any medication, and ate only organic foods,” he explained, “But shortly after going to the beach, where she was likely exposed to toxins, she developed respiratory illness and developed cancer within weeks. I think this was due to direct exposure to chemicals in the dispersants and VOCs.”

According to the US Government, BP’s oil disaster released at least 4.9 million barrels of oil into the Gulf of Mexico. BP has used at least 1.9 million gallons of toxic dispersants, that are banned in at least 19 countries, to sink the oil.

While there are many examples of acute exposures like Pearcey and Dr. Soto’s patient who developed cancer, his concern is that most residents who are being exposed will only show symptoms later.

“This latter group develops symptoms over years,” he told Al Jazeera. “I’m concerned with the illnesses like cancer and brain degeneration for the future. This is very important because a lot of the population down here may not have symptoms. But people are unaware they are ingesting chemicals that are certainly toxic to humans and have significant effect on the brain and hormonal systems.”

Dr. Soto is most concerned about the long-term effect of the toxins, because they have “tremendous implications in the human immune system, hormonal function, and brain function.”

The toxic compounds in the oil and dispersants are “liposoluble,” meaning they have a “high affinity for fat,” according to Dr. Soto.

“The human brain is 70 percent fat,” Dr. Soto added, “And these will similarly effect the immune cells, intestinal tract, breast, thyroid, prostate, glands, organs, and systems. This is also why this is so significant for children.”

His particular concern for children involves toxins which cause “development of the depressed immune system and a resurgence of cancer.”

Dr. Soto believes that for residents along the area of the Gulf Coast affected by BP’s toxic chemicals, the solution is either to relocate or to engage in an intensive, long-term detoxification regime that includes intravenous detoxification programs.

State health departments in Louisiana, Mississippi, and Alabama had issued swimming advisories while BP’s well continued to gush oil into the Gulf of Mexico last summer. Since then, however, all three states have declared their beaches, waters, and seafood safe from oil disaster related toxins.

Florida never issued any advisories, despite many residents reporting illnesses they attribute to the oil disaster.

US federal government agencies like the Environmental Protection Agency, Food and Drug Administration, and the National Oceanic and Atmospheric Administration, along with President Barack Obama himself, have declared the Gulf of Mexico, its waters, beaches, and seafood, safe and open to the public.

In addition, most doctors in the effected coastal areas are not treating people as though they are suffering acute exposure to toxic chemicals.

While Al Jazeera has heard of incidences where doctors having received threats, and while many fear litigation for talking openly about patient illnesses being attributed to BP’s oil disaster, most doctors are simply not trained to deal appropriately with acute chemical toxicity on a mass scale.

Dr. Mary Jo Ghory a general and pediatric surgeon, and a member of the American College of Surgeons, told Al Jazeera she believes most doctors along the Gulf Coast are unlikely to connect the illnesses they treat to BP’s chemicals, because of a lack of adequate training.

“Toxicology is not usually a course, and there is not much discussion of the toxic effects of chemical exposure,” Dr. Ghory said. “When confronted with an array of confusing and widely varying symptoms related to chemical exposure, it is difficult for each individual physician to sort things out, especially without a definite profile of what to expect.”

Dr. Soto says he is in a very unique – but isolated – position, as he is one of the only medical doctors he knows in the region who is treating people accordingly.

Like Dr. Ghory, Dr. Soto believes this is largely due to lack of training.

Merle Savage was a cleanup worker for the Exxon Valdez oil disaster in Alaska in 1989, and she is still suffering health effects from chemicals in the oil and dispersants.

“The first few weeks I was on the beach spraying hot water onto the oil covered rocks,” Savage explained to Al Jazeera. She was soon promoted to a foreman working on the support barges where workers returned each evening.

“So when they started spraying the dispersant, the crews that came back in from spraying it returned with it all over their suits and boats. They were sprayed off with water, and the steam that came off them was dispersant chemicals and we all breathed this in.”

“The symptoms mimicked the flu, and everyone was coughing,” Savage added, “Then it came on and stayed. I went to the doctor during some time off the cleanup, and at that time I was congested with bronchial problems. Then it became a stomach disorder. My whole system since then has been jeopardized.”

After finishing her work on the oil disaster clean up, she returned to her home in Anchorage, where her problems worsened.

Savage moved out of Alaska, thinking that would improve her health. Yet after moving, a liver biopsy showed cirrhosis of the liver.

“I have always been physically active and very healthy,” she explained, “I don’t drink or smoke, and I eat health food.”

“There was 21 years of watching my body break down like that, and nothing I could do helped, until I learned I was chemically toxified, and could treat that appropriately,” she said.

Independent scientists and activist groups have been carrying out their own blood testing of Gulf Coast residents.

Recent results released in a report involve a 46-year-old male who lives 100 miles from the coast. The man, who asked to remain anonymous, was not a BP cleanup worker, yet tested as having higher levels of chemicals from BP’s oil in his blood than the actual cleanup workers.

Dr. Wilma Subra, a chemist and Mcarthur Fellow, analysed his blood and found the highest levels of ethylbenzene than anyone tested to date. Ethylbenzene is a form of benzene present in the body when it begins to break down; it is also present in BP’s crude oil.

Styrene, a chemical produced in industrial quantities from ethylbenzene was also found, along with Hexane. M,p-Xylene, a clear, colorless, flammable liquid that is refined from crude oil and is used as a solvent, was also present in the man’s blood.

“I’ve never even seen a tar ball,” the man, from Louisiana, told Al Jazeera, “I tried to stay away from all of it. So for me to have the high levels I have, tells me that everyone must have it.”

Gregg Hall lived in Pensacola, Florida, and also had his blood tested by Dr. Subra.

“I have a cough that won’t go away, my feet have been numb for months, I have headaches and nausea all the time,” Hall said.

Hall recently moved to Idaho, and is among a growing number of Gulf Coast residents who feel that they are victims of an environmental catastrophe that has received inadequate response from the federal government.

This article was originally published on Al Jazeera. For more of Dahr Jamail’s reporting on the Gulf Coast, visit his website at dahrjamailiraq.com.