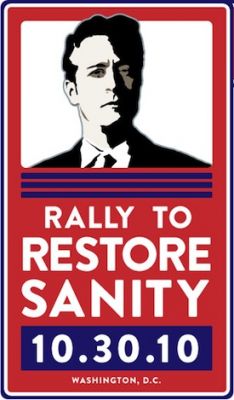 Remember your “Rally to Restore Sanity” in DC last October? I’m sorry, but my sanity remains unrestored. In fact, I’ve been feeling increasingly deranged. It’s like I’m speeding down Life’s superhighway at 666 miles per hour, headed for Nut City, where I am due to give my inaugural speech as Mayor.

At first, I thought Code Pink was the sanity problem. Those wacky, pinkly attired women are notorious for screaming “war criminal” at Senate hearings and decrying atrocities inflicted by the U.S. military in the name of fighting terror. In fact, they use the term “war criminal” so much, they even have a War Criminal Watch Calendar. I refer to it often.

I knew The Daily Show had targeted Code Pink as the paradigm of leftist “insanity.” But I assumed that was because of Code Pink’s puerile fashion sense. I, in contrast, believe that if one is serious about peace activism, one must deploy dignified garmentation, such as the blue denim overalls festooned with STOP THE WAR buttons that I wear when I scream “war criminal” at elected officials. But it turns out you meant Code Pink to be the paradigm for anybody, regardless of dress code, who speaks of elected officials – particularly U.S. Presidents – as “war criminals.”

I know this because I heard you on MSNBC when Rachel Maddow interviewed you just after the Rally. You criticized Ms. Maddow for the same thing:

So. “Technically” Bush probably is a you-know-what. We just can’t say that if we want to be part of the conversation? I can only assume this “conversation” of which you speak is sanity itself. Fit only for the sane.

Bear with me. I’m trying to enter the million-moderate chat room, here. So sane people agree that Pol Pot and Hitler were war criminals? I’m down with that. I feel cozy screaming, “Hitler was a war criminal!” Suddenly, I fit in.

So I hate Hitler, too! Booooooo, rot in hell, mean war criminal Hitler! You Norma Desmond has-been of the Master-Race Theater! Where’s your Teutonic god now, Aryan-boy? I only wish I’d been there then. I’d march right up to the Reichstag and scream –

Wait. If I’d been there then and was able to march into the Reichstag, that would mean I had somehow not been sent to a camp. Which would, in turn, indicate that I was probably not one of an “inferior” out-group, but a simple person, trying to pass for a good person – a good German, if you will. I’d, of course, be thoroughly steeped in the conversation of the time. But one day, maybe I’d just get tired of seeing the cattle cars roll by, and decide to start a new conversation. Taking my life into my own hands…

But we are now and here. Instead of some White Rose crackpot in 1942 Germany screaming “war criminal” and being decapitated, Code Pink in today’s US of A gets to scream “war criminal” and is met only with minor derision and contempt. Anyone would agree that derision and contempt are kinder and gentler than physical liquidation – and way more effective in keeping the conversation sane. Who wants to get laughed at for being sincere? As we activists chant, “This Is What Democracy Looks Like.”

The conversation is THE happening thing. You understand, Jon Stewart, that because the conversation is the one thing everybody takes seriously, it’s the place where you’re allowed to be funny, and maybe change things…just a little.

Inside the conversation, you get to laugh and feel regret, but not much grief. And it’s the grief that makes you crazy, grief at the irrevocable loss of thousands of soldiers, Iraqi, Afghani, Pakistani civilians, grief at the way their survivors are forced to live. Hell, even when the conversation turns to U.S. job loss and foreclosure, sane conversationalists aren’t able to put their grief about their own lives into words.

It’s lonely here, outside the conversation. Plus, most of my fellow activists totally work my nerves. Including Code Pink. So maybe if I objectify my feelings to begin an anti-war argument with actual facts, I’d be allowed in. Here goes: the Iraqi Body Count estimates that there have been, to date, up to 108,094 Iraqi civilian deaths, while Just Foreign Policy says total Iraqi deaths due to the U.S. invasion number 1,421,933. The number of U.S. military personnel…

Wait. In using these numbers to make a political point, I’ve suddenly lost my unhinged awareness that every one of these dead was a unique and memorable human being. I mean, it’s not like they’re Jon Stewart, whose passing someday from natural causes will elicit in Americans a true sadness, because The Daily Show he hosted once helped to shape the conversation. The statistical dead disappear from the yak-yak. Try, for instance, to find Wikileaks.

But ye shall know the truth and the truth shall make ye nuts – dead or alive, every soul weighs the same. Another truth: there’s way more war criminals around here than mental health. So maybe the Rally to Restore Sanity is a misnomer; maybe there wasn’t much sanity to begin with. Therefore, as Mayor, I would like to present you with the key to Nut City.

This article was originally published on PMPress.org.