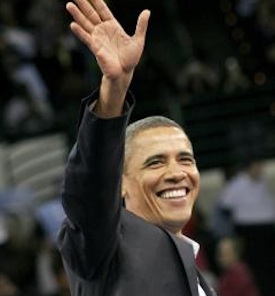 As Barack Obama prepared for his first State of the Union speech before a Congress with Republicans in charge of the House, official Washington seemed to think that the president had regained his momentum.

“President Barack Obama is riding a surge of public support into next week’s State of the Union address, with more Americans approving of his performance and more seeing him as a political moderate,” wrote the Wall Street Journal’s Jonathan Weisman and Danny Yadron.

Opinion polls seemed to back up the conventional wisdom. In the week before the address, a NBC/Wall Street Journal poll showed that Obama had the support of 53 percent of registered voters–precisely the amount of the popular vote he won in 2008.

Different media outlets highlighted different parts of the White House-leaked pieces of Obama’s speech in the days before his appearance on Capitol Hill. The conservative Wall Street Journal headlined the proposed spending on research, infrastructure, education and other items that Obama planned to highlight. The “centrist” New York Times predicted “Obama to Press Centrist Agenda in Speech.” And the inside-the Beltway Washington Post focused on the business lobbyists who were trying to persuade the White House to include mentions of their pet issues.

Most political commentators explain Obama’s positioning as a move to “the center” following the Democrats’ “shellacking” last November–in a bid to win back the “independent” voters who deserted the party in the congressional elections.

This is such a hackneyed explanation that it could almost have been written months before the election, without even knowing the outcome. But the New York Times followed through anyway:

In his speeches, policy choices and personnel appointments, Mr. Obama has signaled that after two years in which his response to the economic crisis and his push for passage of the health care bill defined him to many voters as a big-government liberal, he is seeking to recast himself as a more business-friendly, pragmatic progressive.

The Washington establishment loves “the center”–that mythical place where politicians work together for bipartisan goals in an atmosphere of “civility.”

But when you try to define “centrist” goals, they almost always include “entitlement reform,” “free trade,” “competitiveness” and “deficit reduction”–in other words, the points on the big business wish list. Under the guise of needing to reduce the federal deficit, the Washington establishment wants to win “entitlement reform”–which, in real terms, means cutting Social Security, Medicare and other programs that comprise what’s left of the social safety net for working people.

It’s no coincidence that Obama’s boost in the press and polls coincides with the White House charm offensive towards Corporate America–whose latest turn was Obama’s naming of General Electric CEO Jeffrey Immelt to lead a panel of outside economic advisers. That capped a week in which Obama authored a Wall Street Journal op-ed article calling for cuts in government regulations. In early February, Obama will deliver a speech to the U.S. Chamber of Commerce where he is expected to stress his pro-business agenda.

If Obama is quieting his big business critics with these moves, then the media outlets they own are less likely to criticize him. Good press usually makes for positive public opinion.

The idea that Obama was a “big government liberal,” determined to strangle business in the first two years of his term, is now the received wisdom–even though that was largely a right-wing talking point. Nevertheless, Obama’s recent approach to business is seen as an admission that his conservative critics were right, and that he needs to tack to the “center.”

This is a distortion of reality. Although business squawked quite a bit about policies Obama pushed such as health care reform and Wall Street regulation, the outcomes of both initiatives fell far short of what their most ardent proponents hoped. In both cases, the White House intervened to make sure that the provisions business hated the most–such as the “public option” in health care reform, for example–never made it into the final bills. Obama’s actions showed that he has always been much more of a “centrist” than his critics claimed.

Even the idea that business lined up overwhelmingly against the Democrats last November is hard to sustain when the Center for Public Integrity’s analysis of campaign contributions to congressional candidates in the 2010 elecion shows an almost even split between the two major parties, according to figures released January 22.

At the beginning of Obama’s term in 2009, business had three objectives: first, assure that the government did whatever was necessary to prevent an economic meltdown; second, make sure that no one actually responsible for the economic crisis–in particular, Wall Street bankers–faced punishment, much less strong regulation; and third, prevent “social democratic” or pro-working class policies from emerging from the crisis.

Obama fulfilled the first objective by continuing the “pro-business” Bush administration bailout programs for the financial sector. He largely achieved the second with his appointments of Wall Street-friendly advisers like Treasury Secretary Timothy Geithner, whose main objective was to restore as much of the pre-meltdown status quo as possible. Obama reinforced his pro-business credentials even more for this year with the recent appointment of JPMorgan Chase executive William Daley as his new chief of staff. As MIT economist Simon Johnson wrote in the blog Baseline Scenario:

Let’s be honest. With the appointment of Bill Daley, the big banks have won completely this round of boom-bust-bailout. The risk inherent to our financial system is now higher than it was in the early/mid-2000s. We are set up for another illusory financial expansion and another debilitating crisis. Bill Daley will get it done.

Meeting the third objective is still a work in progress, but Obama’s rhetorical repackaging of pro-business policies such as tax cuts and free trade as measures to promote jobs suggests that he’s well on his way to covering that business goal, too.

Obama knows that public concern about jobs and the economy trumps every other one. Even as the Washington centrists and Tea Party politicians whip themselves into a frenzy over the federal deficit, only 4 percent of Americans rank reducing the deficit as their top priority for Washington, according to a December New York Times/CBS poll. Early previews of the State of the Union speech suggest that Obama won’t lead with the anti-working class austerity plans that the Bowles-Simpson Commission produced in December–but those are always on the table for future use.

When Obama ran for president, he attracted support from liberals, in part, because he criticized the last Democratic president, Bill Clinton, for “triangulating”–in effect, selling out liberal goals to achieve agreements with the Republican congressional majority. Yet it’s diffcult to spot a difference between Clinton’s triangulation and Obama’s approach. That’s especially true when Clinton retreads like Daley, Budget Director Jack Lew and top economic adviser Gene Sperling form the core of Obama’s economic staff.

As Obama gears up to run for reelection in 2012, he’s banking on the Democrats’ core supporters–the people who were most enthused about Obama’s 2008 calls for “hope” and “change”–rallying to him as a “lesser evil” to whatever “scary” Republican emerges from the Republican primaries. And if Obama can carry out a pro-business agenda while maintaining grudging support from the people who would be most opposed to that agenda, business will be quite satisfied.

It’s worth remembering that the Clinton-Gore administration pushed through conservative policies–like ending welfare and running a balanced budget–that Republicans could never have won. No less than Alan Greenspan, the conservative chairman of the Federal Reserve from 1987 to 2006, agreed.

“Bill Clinton,” Greenspan told the Wall Street Journal, “was the best Republican president we’ve had in a while.”

Lance Selfa is the author of The Democrats: A Critical History, a socialist analysis of the Democratic Party, and editor of The Struggle for Palestine, a collection of essays by leading solidarity activists. He is on the editorial board of the International Socialist Review.