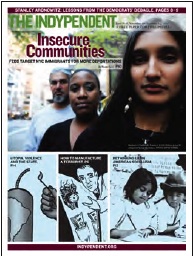 I am a ’74 graduate of Dewey High School. We had resource centers that were overstocked with books — now there is one cabinet, and it’s locked. Setting a school up to fail, not supporting it and then claiming we have to close because of failure is Intellectual Fabrication and deceit of the highest order.
— Bunji Fromartz

If it is deplorable to deport an illegal alien, then why have that status at all? Maybe you should investigate what would happen with completely open borders. I’m pretty aware of the problems, I just haven’t heard great solutions.
— Powel6

I’m safer, now that my county participates in Secure Communities. This enables the federal government to make its rightful decision regarding someone’s immigration status. I hope the entire state will soon be participating, for this improves safety and security for all of us.
— Magyart

This book appears to pose a false choice — that rioting is the only alternative to purely symbolic, theatrical protests. There are other forms of nonviolent direct action that can be very effective, such as strikes. However, these require serious, difficult organizing by people willing to go outside their  activist-lifestyle subculture to try to unite with others.
— Ink-Stained Wretch

I’ve been in a black bloc or two… but it’s every bit theatre. Violence per se isn’t the issue. We can’t understand the rise of “riot party” politics without looking at changes in policing models that essentially criminalized all major protests over a ten-year period. The way in which the debates framed the issue as “violence” always missed the point. Thanks to the black bloc for forcing the rulers of the world to hide behind walls of police and barricades whenever they meet to carve up the world. It’s not the revolution but at least it put some real, visible and determined resistance up to those bastards. Respect is due.
— Internet red

Not one NYC critic seems to have any grasp of the historic and large role American Indian culture played in this movement. For example, new and well-documented evidence has been developed proving that Rothko was attending and sketching at American Indian ceremonies as early as 1938 and continued to do so as late as 1949.
— Noah G. Hoffman Director, Mark Rothko Southwest History Project / Rothko with Reservations