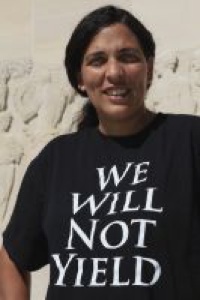 NEW ORLEANS, Louisiana – In an emotionally charged meeting this week sponsored by the National Commission on the BP Deepwater Horizon Oil Spill, fishermen, Gulf residents and community leaders vented their increasingly grave concerns about the widespread health issues brought on by the three-month-long disaster.

“Today I’m talking to you about my life,” Cherri Foytlin told the two commissioners present at the Jan. 12 meeting. “My ethylbenzene levels are 2.5 times the 95th percentile, and there’s a very good chance now that I won’t get to see my grandbabies…What I’m asking you to do now, if possible, is to amend [your report]. Because we have got to get some health care.”

Ethylbenzene is a form of benzene present in the body when it begins to break down. It is also present in BP’s crude oil.

“I have seen small children with lesions all over their bodies,” Foytlin, co-founder of Gulf Change, a community organisation based in Grand Isle, Louisiana, continued.

“We are very, very ill. And dead is dead. So it really doesn’t matter if the media comes back… or the president hears us, or… if the oil workers and the fishermen and the crabbers get to feed their babies and maybe have a good Christmas next year… Dead is dead…I know your job is probably already done, but I’d like to hire you if you don’t mind. And God knows I can’t pay you. But I need your heart. And I need your voice.”

Commissioner Frances Beinecke, president of the National Resources Defence Council, vowed to convey her concerns to the White House.

“We hear what you are saying,” said Beinecke. “We will take these health issues and concerns back to the president.”

The commission, appointed by President Barack Obama, released its final report this week after a six-month investigation into the nation’s worst-ever oil disaster.

The report recommended a massive overhaul of the oil industry’s failed safety practices in the Gulf, as well as the creation of a new independent agency to monitor offshore drilling activity.

However, most of the 250 people at the meeting here focused on the health crisis that has exploded in the wake of the April 2010 disaster, leaving former BP clean-up workers and Gulf residents alike suffering from ailments they attribute to chemicals in BP’s oil and the toxic dispersants used to sink it.

Dr. Rodney Soto, a medical doctor in Santa Rosa Beach, Florida, has been testing and treating patients with high levels of oil-related chemicals in their bloodstream.

These are commonly referred to as volatile organic compounds (VOCs). Anthropogenic VOCs from BP’s oil disaster are toxic and have negative chronic health effects.

Dr. Soto is finding disconcertingly consistent and high levels of toxic chemicals in every one of the patients he is testing.

“I’m regularly finding between five and seven VOCs in my patients,” Dr. Soto told IPS. “These patients include people not directly involved in the oil clean-up, as well as residents that do not live right on the coast. These are clearly related to the oil disaster.”

Nevertheless, U.S. government agencies like the Environmental Protection Agency, Food and Drug Administration, and the National Oceanic and Atmospheric Administration, along with President Obama himself, have declared the Gulf of Mexico, its waters, beaches, and seafood, safe and open to the public.

Gulf residents at the meeting on Wednesday made sure the two commissioners were aware of the health crisis they are facing.

Tom Costanza of Catholic Charities in the New Orleans area stated that the region is in the middle of a social service crisis and faced a claims process he said is fraught with problems.

“People call me crying and dying,” he said. “They need medical attention and support to get through this.”

Ada McMahon works with Bridge the Gulf Project, a citizen journalism website that highlights stories from Gulf Coast communities about justice and sustainability. She told IPS that “the unmet health issues are the biggest issue, along with residents turned advocates going to meetings of the commission or with [BP oil spill fund administrator Kenneth] Feinberg to tell people about their health problems.”

“People who can afford the 300-dollar blood tests have found alarming rates of chemicals in their bodies, and these people are concerned and doing what they can to speak out,” she said. “But they feel they can’t wait for Congress or Obama to address this, because they need doctors and support now in the communities.”

LaTosha Brown, director of the Gulf Coast Fund for Community Renewal and Ecological Health, which works with 250 community groups, agreed that “the key concern expressed by the community in response to the report is the overwhelming need for access to health care.”

“Over and over, people exposed to crude and dispersants from the drilling disaster told stories of serious health issues – from high levels of ethylbenzyne in their blood, to respiratory ailments and internal bleeding – and expressed an urgent need for access to doctors who have experience treating chemical exposure,” she said.

Stephen Bradberry, executive director of the Alliance Institute, a non-profit that provides community organising support in the Gulf South, worries that the Gulf Coast Claims Facility is not accepting health claims, thus leaving sick residents unable to work and without any income to pay their medical bills.

“There is bruising and skin lesions, not just with clean-up workers, these are residents not involved in the clean-up,” Bradberry told IPS. “Just yesterday I learned of five people on Grand Isle who passed away…people who did not have health problems prior to this. Nevertheless, there has not been any talk of monitoring of these communities.”

Bradberry, who also attended the forum on Wednesday, also said, “We need a separate health task force that can focus solely on testing, monitoring, and studying the long-term health issues from exposure to crude and dispersants. And this needs to happen now.”

This article was originally published by the Inter Press Service. For more of Dahr Jamail’s reporting,visit dahrjamailiraq.com.