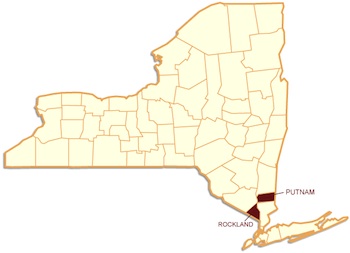 There isn’t much landscaping work in Rockland County during the winter, so the Jornaleros Project rents space from a church where day laborers can stay indoors, find warm clothes, and pass the time taking English classes. During the rest of the year, the project often advises workers on how to deal with employers who refuse to pay them.

“It’s a community that’s easy to pick on,” said Juan Pablo Ramirez, president of the Jornaleros Project and an immigrant from Colombia. Many of the workers he assists are undocumented immigrants from Guatemala.

That’s because Rockland County, along with nearby Putnam County, has activated Secure Communities. The controversial immigration enforcement program shares arrest data from local jails with Immigration and Customs Enforcement (ICE).

“It’s going to be even more scary for someone to confront their employer,” said Ramirez.

Police in the area insist the program is simply an information-sharing program that will not change how they enforce state and local laws since the county began participating on Jan. 11.

Putnam and Rockland are the first of 62 counties in New York who are expected to activate Secure Communities by 2013, along with the rest of the country. Since it began in 2008, the program has been activated in 969 counties in 37 states nationwide.

The two counties consist mostly of bedroom communities that lie about 30 miles northwest of New York City, where resistance to Secure Communities is strong. The NYPD police commissioner has expressed concern about the program, and more than a dozen city council members have asked the state to rescind an agreement it signed with ICE last May that clears the path for its expansion.

“We are particularly concerned for immigrants in counties outside of NYC who are more isolated from groups that are organizing and protecting for immigrant rights.” Michelle Fei, Co-Director, Immigrant Defense Project.

Tension towards immigrants in Putnam County flared in 2009 when an undocumented immigrant killed a mother and daughter during a drunk driving accident in the Village of Brewster. After the incident, strong language appeared in comments posted to a local news outlet’s message board.

“I volunteer to feed this piece of garbage into a wood chipper alive with his hands taped to his ankles,” read one comment. “These animals must be dealt with. If the government does not do something, someone will.”

In 2008, the village of Suffren, in Rockland County, tried to join 287(g), a federal program that deputizes local police to enforce  immigration law. Its application was declined in part because the county  – like most areas in New York – already targets immigrants in jail and prison for deportation through the Criminal Alien Enforcement Program (CAP).

In Putnam County, the Sheriff said he has used CAP to report at least 500 “criminal aliens” to ICE when they gave a foreign country of birth during the booking process.

But the addition of Secure Communities to the county’s law enforcement tool box has caught many residents off guard.

“We were all disturbed by the lack of transparency,” said Betsy Palmieri, a longtime member of the Hudson Valley Community Coalition. She said the program was activated without any chance for public input.

Advocates say immigrants who fear any interaction with police could lead to their information being shared with ICE are less likely to report crimes that impact residents of any citizenship status.

“Our taxes pay for the police department,” said Palmieri, “but we’re not consulted on programs like this that do not make us feel more secure.”

Palmieri and Ramirez told Deportation Nation they plan to begin holding workshops for immigrants on what to do when they are stopped by police. Ramirez said he will continue working with the Mexican and Guatemalan embassies to provide workers in the area with government issued ID cards that they can show when police ask for identification.

ICE spokesman Ivan Ortiz said the number of people transferred to their custody from the two new counties won’t be tallied until the end of the month. He said he did not know which New York counties would be next to join.

“There has to be an infrastructure in place before we can deploy the initiative to  a specific county,” said Ortiz. “Sometimes the deployment is delayed because of technological difficulties. It’s all about technology.”

But for Ramirez, the program has evoked much stronger emotions. He noted Secure Communities has a mandate to target immigrants who pose a threat to public safety, but most of those detained in other areas with the program have been non-violent offenders or people who simply lack legal status.

“The immigrant community here in Rockland county is a hard-working, family-oriented community who wants to give back and get involved, but a program like this does not help,” said Ramirez. “It causes division. It causes mistrust. And its unfortanate that its going to begin here.”

This article was originally published on DeportationNation.org.