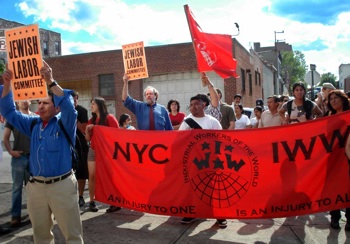 Hidden in the industrial corridor that stretches through East Williamsburg, Bushwick, Ridgewood, and Maspeth is an area of urban manufacturing warehouses that form a “sweatshop belt.” This belt of warehouses, many of which provide food processing and delivery services to specialty stores and restaurants throughout New York City, relies on the exploitation of a largely immigrant workforce. Workers suffer under harsh conditions with little to no voice on the job, but at one of these warehouses — Flaum Appetizing Co. in East Williamsburg — the workers are fighting back.

Maria Corona and her friend, Ana — who asked that her real name not be used for fear of employer retaliation — used to work together in the salad prep area of Flaum, preparing as many as eight vats of coleslaw, potato salad, cucumber salad and fruit salad per day. Maria and Ana worked upwards of 80 hours per week for less than the minimum wage with no overtime pay.

Three brothers, Felipe, Justino and Placido Romero, worked with their nephew Juan in preparing, packing and delivering hummus, salads, pickles and other kosher products that carry the Flaum name. They typically worked 12-hour days, six days a week, which they said was not easy, but it was tolerable.

“In the beginning it wasn’t good, but it wasn’t bad,” said Juan, but in 2007 a new manager came in and the conditions worsened drastically.

“The manager would call us ‘tarantulas’ and ‘cockroaches,’” said Maria. “He would point to the pickle barrels and say ‘that’s how you guys sneak into the country.’ Then we would ask him why he would say that and he said ‘I don’t like Latinos.’”

Fed up with long hours, low pay, discrimination and abuse, the workers at Flaum agreed that enough was enough. They met with an organizer from the Industrial Workers of the World (IWW) labor union and decided to join in order to fight for improved conditions and a decent standard of living. What followed was a campaign of harassment and intimidation by management that culminated in the firing of 17 workers in May 2008.

With the help of the IWW, the workers filed an Unfair Labor Practice complaint with the National Labor Relations Board. The NLRB ruled that this firing was illegal retaliation and fined the company $260,000 in back pay. Flaum owner Moshe Grunhut has yet to pay the workers, claiming that they aren’t entitled to it because of allegations regarding their immigration status.

At least once a week the fired workers and their supporters hold grassroots protests outside such grocery stores as KRM Kollel in Borough Park to educate customers about workers’ rights abuses at Flaum.

The campaign is having an impact, with the Park Slope Food Coop voting to boycott Sonny & Joe’s hummus — a popular Flaum product — in December. Barzini’s on the Upper West Side decided to stop selling Flaum products in January 2011 and Associated Supermarket and Zabar’s, followed suit in February, along with Third Ave Garden on the Upper East Side.

The Flaum workers have received support from such area Jewish groups as Uri L’Tzedek, an Orthodox social justice organization, as well as the Jewish Social Action Club at Queens College. With increased pressure and media exposure, members of the founding family Beverly and Sander Flaum put out a statement that officially distanced themselves from the current ownership.

“Since 1987 no family member of the original Flaum’s Appetizing Store ownership has had any financial or any other interest in any Flaum Appetizing business enterprise,” they wrote in a Jan. 11 letter to The Jewish Weekly. When the business was sold, the Flaums wrote, its present owners “took over all managerial and financial responsibility for the enterprise.”

“We will win if we’re united,” said Placido Romero, reflecting on the campaign’s growing power. Although he, his family, Maria and Ana continue to await the pay they are owed, they say they are going to keep fighting until they get what they are owed and conditions improve for all the workers at Flaum. And they say a breakthrough at Flaum will also set the stage for future organizing efforts in the sweatshop belt.

“It doesn’t matter if it takes weeks, months or years. We’re going to keep engaging in battle,” said Felipe Romero.