As the nation’s beloved author/farmer philosopher Wendell Berry settled his 76-year-old lanky frame onto the floor of Kentucky Gov. Steve Beshear’s office last night, he picked up a copy of The Tempest. But in joining other protesters in this extraordinary sit-in to halt reckless mountaintop removal mining, including a coal miner and inspector who dedicated 40 years of his life to the industry, a Harlan County activist whose brother was killed in a mine, a nurse who has served black lung-affected coal miners for decades, and some of the country’s top Appalachian labor and history scholars, Berry was not taking part in any Shakespeare spectacle.

When Prospero commands in the classic play, “We are such stuff, as dreams are made on,” Kentuckians, who have lived among the ravages of strip-mining for a century–and mountaintop removal operations since 1970–were making it clear that they can no longer wait for the elusive dream of coalfield justice and democracy in their own homeland of central Appalachia. 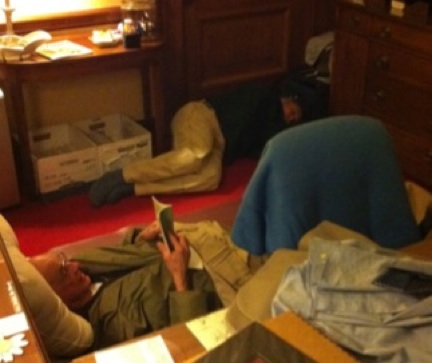 When Martin Luther King wrote his game-changing letter for the Civil Rights movement on the need for civil disobedience, “Why We Can’t Wait” from the Birmingham, Alabama jail in 1963, the neighbors and families of these same Kentuckians were already in the throes of a growing movement to stop the devastation from unyielding and increasingly lawless strip-mining operations.

While King sought “to create a situation so crisis-packed that it will inevitably open the door to negotiation,” besieged strip-mined residents in Knott County in eastern Kentucky organized their own sit-ins and protests to keep unchecked strip-miners from destroying their historic homelands and hillsides and watersheds. They exclaimed to the world: “We feel we have been forsaken.”

As early as 1965, a 50-car convey of coalfield residents made the same trek as today’s protesters to the governor’s office in Frankfort, and called on him to enact enforceable laws to keep absentee coal companies from “ruining our farms and fields and streams.”

Yesterday’s meeting between the sit-in activists and Gov. Steve Beshear revealed the state’s still astonishing denial of the human, environmental and economic cost of coal placed on the shoulder of its coalfield citizens. Beshear refused to acknowledge any of the impacts from strip-mining, including the widely documented irreversible and pervasive destruction of federally-protected waterways from mountaintop removal dumping. He dismissed the EPA as a meddler in state affairs.

In one of the most poignant moments in the meeting, eastern Kentucky coalfield resident Rick Handshoe said to the governor: “I pay a higher electric bill than you: I pay my electric bill, and I pay with my family’s health, my nephew’s health. We pay a bigger price. We’re paying with our lives there.”

More than four decades since King’s letter and the Kentucky movement to abolish strip-mining, Kentuckians and the nation have watched as close to 300 mountains and nearly 600,000 acres of hardwood forests, and hundreds of miles of headwater streams, have been irreversibly destroyed by mountaintop removal strip mining. In the process, more than 60 percent of the coal miner jobs have been stripped by the heavily mechanized operations, leaving the local economies in ruin and without any hope of economic diversification. According to recent studies, less than four percent of any mountaintop removal reclamation operation has resulted in verifiable post-mining economic productivity excluding forestry and pasture.

Kentuckians are as forsaken today as they were when the desperate Knott County residents called on the nation for assistance in the 1960s.

As the most egregious human rights and environmental crime over the past 40 years, mountaintop removal mining in all of central Appalachia, which provides less than 5-8 percent of our national coal production, has resulted in the largest forced removal of American citizens since the the mid-19th century.

Martin Luther King dispelled the role “outside agitators” in his letter, and provided the “four basic steps” of non-violent civil disobedience: “The collection of the facts to determine whether injustice exists; negotiation; self-purification; and direct action.”

As Berry and the sit-in protesters remain holed up in his office for the weekend in this inspiring act of protest, in anticipation of the call for a mass rally on Monday at the Kentucky capitol for “I Love Mountains Day,” the nation will continue to watch as this veritable Kentucky Rising plays out.

The question remains: Will Kentucky continue to deny the costly and deadly impacts of mountaintop removal, or begin the process, as Martin Luther King wrote, “to heal” the legacies of the past and move his state toward a just transition for clean energy?