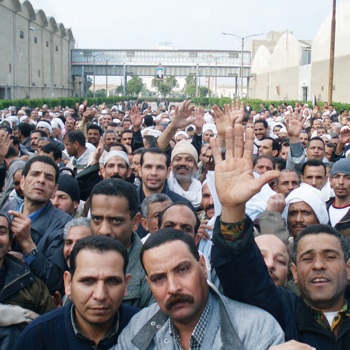 Joel Beinin is the Donald J. McLachlan professor of history and professor of Middle Eastern history at Stanford University. Between 2004 and 2009 Professor Beinin made multiple trips to Cairo, including two periods when he lived in Egypt. He interviewed Egyptian workers and explored both the history and the current state of the labor movement. Beinin summarized his findings in a report entitled The Struggle for Worker Rights in Egypt.

Could you describe what life is like for the typical middle-class urban worker in Cairo?

JB: First of all, in Egypt, the word working class is not taboo. Workers are called workers and not middle class. And working class is a term that everybody understands
The typical monthly base salary for a textile worker is 400 Egyptian pounds a month. That’s about $70. You also get incentive pay, bonuses of various sorts and so on. But if you put two salaries together in a typical Egyptian family of five, you’re just above the poverty line ($2.00 a day per person). According to the World Bank, 44 percent of the Egyptian people live under or just near the poverty line.

Most urban workers are barely able to feed their families and to provide education for their children because the Egyptian public school system simply does not work. Everybody has to hire tutors for their children. People are constantly over their eyeballs in debt.

The price of food has skyrocketed in the last five years, especially in the last several months. And people just cannot make it. Underlying all the political grievances that have come to light in the last week, in a very sharp way, are these economic problems, which have been going on for the last 20 years roughly.

In The Struggle for Workers Rights in Egypt you reference 1952 as the year that the “fundamentally autocratic power” of the Egyptian regime began. How have working conditions for the average Egyptian changed since then?

JB: The regime of Gamal Abdel Nasser and the Free Officers, which came to power in 1952 after a military coup that ousted the monarchy, certainly was autocratic. But, it was an authoritarian populist regime. From 1952 to about 1965-66, the standard of living of workers and peasants rose quite dramatically. There was not only a moderate land distribution for the peasantry but, even more importantly, imposition of rent control on Egyptian agricultural lands. Urban wages rose. A paid weekly day off was instituted. A minimum wage was instituted. Nasser, for these reasons and others, was wildly popular for most of his rule, except among those who he jailed and tortured, primarily the Muslim Brothers and the communists.

This type of regime based on authoritarian populism and import-substitution industrialization was widely practiced throughout the newly independent countries of Asia, Africa and also in Latin America. But it has some built-in problems that began to show by the mid to late ’60s. By the time Nasser died in 1970 it was becoming clear to some people that the country needed to go on a new path.

Anwar Sadat, Nasser’s successor, announced in 1974 a new, economic policy called the open-door policy. This was the beginning of a very long and protracted process of privatizing the economy, cutting back state expenditures, reducing social services, reducing the subsidies on basic commodities that had been instituted even before Nasser came to power.

It took from their proclamation in 1974 until the 1991 agreement with the World Bank and the IMF for these policies to become fully operational. When that happened, very quickly, standard of living, working conditions for workers began to decline. 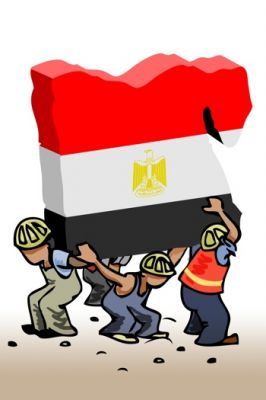 In 1991, Egypt signed an economic reform agreement with World Bank and the International Monetary Fund to privatize the public sector. How did this move affect the nation’s laborers in subsequent years?

JB: Most people would agree that staffing in public enterprises in Egypt, especially textiles, which is the number-two industry in the country after food processing and canning, is perhaps 25 percent more than necessary. If you are a private entrepreneur and the government proposes to sell a textile plant, you don’t want those 25 percent extra workers because obviously, that’s going to cut into your profits. So the problem was, how do we get rid of them? The privatization program included legislation that a new employer who buys an enterprise cannot wholesale fire workers and has to provide the same level of wages and benefits as the workers previously enjoyed.

In order to make that work, the government began to institute early-retirement schemes. They’d give anybody over a certain age about $8,000–9,000, to retire. In Egypt, that’s a pretty substantial amount. You could buy a pickup truck. You could buy a grocery store. You could buy some agricultural land. You might survive okay if you took that.

On that basis, some firms were sold off, but not enough. Then, a new government came into power — the one that’s just been dismissed — in July of 2004. And unlike all the previous governments, this government, which was nicknamed “the government of businessmen,” they were gung ho for this program. They privatized more in terms of total asset value in their first year in office than had been sold off in the previous ten years. And of course, doing everything at that pace made all sorts of problems. They didn’t offer people the same level of early retirement bonus so fewer people took it. Almost immediately in the second half of 2004, you see a big spike in the number of strikes, sit-ins and other kind of workers’ collective actions.

Your research indicates that civil unrest can be traced to labor disputes dating back to the early 1990s. Why weren’t the previous strikes and protests by Egyptian workers effective?

JB: In the 1980s and ’90s, there were several periods when there was an upsurge of strikes and other protests. Some of them were, in fact, effective. But quite often, the regime simply rolled in the tanks and gunned people down, which meant that you thought many times before you went on strike or did anything like that.
Gradually, the right to strike became more and more established after a supreme constitutional court ruling stating that the constitution did, in fact, permit people to strike. The government, the executive branch, which holds all the power, didn’t accept that and continued to repress striking workers.

Social media and the recent uprising in Tunisia have been cited as catalysts for spurring the revolution. Would you agree that those are the two most predominant contributing factors?

JB: When you put it that way, black and white, the answer has to be no. I don’t mean to say that they are not important because, of course, they are. But I would put the emphasis on the existence of a whole array of social, political, economic mobilizations that have been going on for the last decade.

There were the popular committees in support of the Palestinian uprising in 2000, the popular committees opposed to the American invasion of Iraq in 2003, the Egyptian Movement for Change in 2004-06, which was a pro-democracy movement that demanded that Mubarak not run for reelection in 2005, which of course he did.
There was big support for the independence of the judiciary in the spring of 2006. In addition, and most important, there were over 3,000 strikes, sit-ins, and protests by over 2,000,000 workers since 1998. And that’s still going on. Every month, I get a new statement from one of the Egyptian NGOs. They’re counting them up by the day, and it’s still at the rate of hundreds per year. None of these things in and of themselves led directly to what’s happened since January 25th. But cumulatively they had a big impact on people’s consciousness and sense of the possibilities for resistance to the regime.