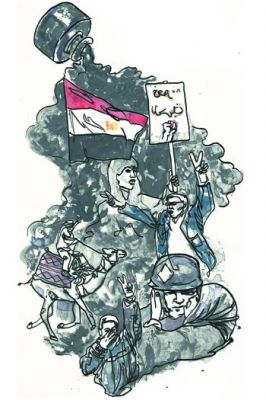 It is truly inspiring to see the bravery of Egyptians as they rose up and ended the criminal rule of Hosni Mubarak. It is especially inspiring to remember that what is happening is the culmination of years of work by activists from a spectrum of pro-democracy movements, human rights groups, labor unions and civil society organizations.

No less astonishing is the poetry that has played a prominent role in these events. The slogans the protesters are chanting are couplets — and they are as loud as they are sharp. The diwan of this revolt began to be written as soon as Ben Ali fled Tunis, in pithy lines like “Yâ Mubârak! Yâ Mubârak! Is-Sa‘ûdiyya fi-ntizârak!,” (“Mubarak, O Mubarak, Saudi Arabia awaits!”). In the streets themselves, there are scores of other verses, ranging from the caustic “Shurtat Masr, yâ shurtat Masr, intû ba’aytû kilâb al-’asr” (“Egypt’s Police, Egypt’s Police, You’ve become nothing but Palace dogs”), to the defiant “Idrab idrab yâ Habîb, mahma tadrab mish hansîb!” (“Hit us, beat us, O Habib [al-Adly, now-former minister of the Interior], hit all you want — we’re not going to leave!”). This last couplet is particularly clever, since it plays on the old Egyptian colloquial saying, “Darb al-habib zayy akl al-zabib” (“The beloved’s fist is as sweet as raisins”).

This poetry is not an ornament to the uprising — it is its soundtrack and also composes a significant part of the action itself.

There is nothing unusual about poetry playing a galvanizing role in a revolutionary moment. And making revolution is not something new for Egyptians — having had no less than three “official” revolutions in the modern era: the 1881 Urabi Revolution that overthrew a corrupt and comprador royalty; the 1919 Revolution, that nearly brought down British military rule; and the 1952 Revolution that inaugurated 60 years of military dictatorships under Nasser, Sadat and Mubarak.

The first revolution succeeded in establishing the second parliamentary government on the African continent before it was crushed by foreign military intervention. In the aftermath of defeat, the British established a rapacious colonial rule over Egypt for more than 70 years. The second revolution was a sustained, popular uprising led by a range of pro-democracy activists from a range of civil institutions. Though savagely repressed, it did force the British to grant some concessions.

The third revolution officially celebrated in Egypt stands apart from the first two in that it was a coup d’etat that went out of its way to circumscribe popular participation. It was accepted in the moment since it finally ended the rule of the royal family first overthrown in 1881 and initiated a process of British withdrawal from Egypt.

esides these three state-commemorated events, Egyptians have revolted against the corruption, greed and cruelty of their rulers many more times in the last 60 years. On Jan. 26, 1952, Egyptians emerged onto the streets to protest an array of issues — including the corruption of the monarchy, the decadence, power and privilege of foreign business elites, and the open-ended British occupation. The revolt was quickly suppressed, though the damage to property was massive, and it set in motion an exodus of foreign elites — and the military coup months later. In 1968, Egyptian students launched huge and daring protests against the repressive policies of Nasser’s police state. In the early 1970s, Egyptian students engaged in sustained mass protests against the radical political reorientations of the new Sadat regime — and eventually forced the state to re-engage in military confrontation with Israel.

On Jan. 18–19, 1977 Egyptians rose up en masse to protest IMF austerity measures imposed on the country by the corrupt, inept and ruthless regime of Anwar Sadat. The Egyptian president was already on his jet ride into exile before the Central Security Forces and Army finally gained the upper hand. During the early 1990s, Islamist protests against the authoritarian rule of Mubarak escalated into armed conflict, both in the slums of the cities and in Upper Egypt. Hundreds of militants, soldiers and civilians were killed before the revolt was finally suppressed.

This list leaves out other significant moments of mass civil protest and contestation — like the massive protests against the First Gulf War, the U.S. invasion of Iraq and Israel’s attacks on Lebanon and Gaza — but even so, the tally is impressive: no less than 10 major revolts and revolutions in 130 years. Modern Egyptians have never passively accepted the failed colonial or postcolonial states that fate has dealt them.

Many of these revolts have had their own poets. 1881 had the neo-classical qasidas of Mahmoud Sami al-Baroudi; 1919, the colloquial zajals of Bayram al-Tunsi. Salah Jahin became one of the leading colloquial poets of the 1952 Revolution, and his patriotic verse became core material for Abdel Halim Hafez, who pinned his career to Nasser. From the same period, Fu’ad Haddad’s mawwals also stand out — and are still sung today. Since the 1970s, it has been Ahmed Fouad Negm who has played the leading role as lyricist of militant opposition to the regimes of Egypt. For 40 years, Negm’s colloquial poems — many set to music by Sheikh Imam — have electrified student, labor and dissident movements from the Egyptian underclass. Negm’s poetry ranges from praise (madh) for the courage of ordinary Egyptians, to invective (hija’) for Egypt’s overlords — and it is no accident that you could hear his songs being sung by the leftist activists who spearheaded the first day of revolt on Jan. 25. Besides these poets, we could add many others — Naguib Surur, Abd al-Rahman al-Abnoudi, Tamim Barghouti — who have added to this literary-political tradition in their own ways.

Beyond these recognized names are thousands of other poets — activists all —who would never dare to protest publicly without an arsenal of clever couplet-slogans. The end result is a unique literary tradition whose power is now on full display across Egypt. Chroniclers of the current Egyptian revolt, like As’ad AbuKhalil, have already compiled lists of these couplets — and hundreds more are sure to come. For the most part, these poems are composed in a colloquial, not classical, register and they are extremely catchy and easy to sing. The genre also has real potential for humor and play — reminding us of the fact that revolution is also a time for celebration and laughter.

How to Do Things With Poetry

The poetry of this revolt is not reducible to a text that can be read and translated in words, for it is also an act in and of itself. That is, the couplet-slogans being sung and chanted by protesters do more than reiterate complaints and aspirations that have been communicated in other media. This poetry has the power to express messages that could not be articulated in other forms, as well as to sharpen demands.

Consider the most prominent slogan being chanted today by thousands of people in Tahrir Square: “Ish-sha‘b/yu-rîd/is-qât/in-ni-zâm.” Rendered into English, it might read, “The people want the regime to fall” — but that would not begin to translate the power this simple yet complex  couplet-
slogan has in its context.

There are real poetic reasons why it emerged as a central slogan. For instance, unlike the more ironic — humorous or bitter — slogans, this one is sincere and states it all clearly. Likewise, the register of this couplet straddles colloquial Egyptian and standard media Arabic — and it is thus readily understandable to the massive Arab audiences who are watching and listening. And finally, like all the other couplet-slogans being shouted, this has a regular metrical and stress pattern (in this case: short-LONG, short-LONG, short-LONG, short-SHORT-LONG). While unlike most others, this particular couplet is not rhymed, it can be sung and shouted by thousands of people in a unified, clear cadence — and that seems to be a key factor in why it works so well.

The prosody of the revolt suggests that there is more at stake in these couplet-slogans than the creation and distillation of a purely semantic meaning. For one thing, the act of singing and shouting with large groups of fellow citizens has created a certain and palpable sense of community that had not existed before. And the knowledge that one belongs to a movement bound by a positive collective ethos is powerful in its own right — especially in the face of a regime that has always sought to morally denigrate all political opposition.

Likewise, the act of singing invective that satirizes feared public figures has an immediate impact that cannot be cannot be explained in terms of language, for learning to laugh at one’s oppressor is a key part of unlearning fear. Indeed, witnesses to the revolt have consistently commented that in the early hours of the revolt — when invective was most ascendant — protesters began to lose their fear.

And having lost that fear, Egyptians are showing no signs of wanting to go back. As the Mubarak regime unleashed more violence, the recitation of these couplet-slogans continued, as if the act of repeating them helps the protesters concentrate on their core principles and demands.

Anyone who has ever chanted slogans in a public demonstration has also probably asked herself at some point: why am I doing this? The question provokes a feeling of embarrassment, the suspicion that the gesture might be rote and thus empty and powerless. Arguably, this nervousness is a form of performance anxiety that, if taken seriously, might remind us that the ritual of singing slogans was invented precisely because it has the power to accomplish things.

When philosophers speak of “doing things with words,” they also remind us that the success of the locutionary act is tied to the conditions in which it is performed. This is another way to say that any speech act is highly contingent — its success only occurs in particular circumstances, and even then, its success is never a given. Success, if it is to occur, happens only in the doing of it.

Since Jan. 25, Egyptians have leapt into the uncertainty of this revolutionary performance. They have now crossed multiple thresholds — and each time, they have acted with no guarantee of success. This is, I think, the core of their astonishing courage: at each point it has been impossible to say that victory is already theirs.
Those who decide to make their own history are not only required to write their own script and build their own stage, they are also then compelled to play the new roles with enough force and conviction to make it cohere, even in the face of overwhelming violence. The poetry of the streets is another form of writing, of redrafting the script of history in the here and now — with no assurances of victory and everything in the balance.

Elliott Colla is Chair of the Department of  Arabic and Islamic Studies at Georgetown University and author of Conflicted Antiquities: Egyptology, Egyptomania, Egyptian Modernity. A version of this  article was originally published by  jadaliyya.com.