This article was originally published on CommonDreams.org from Almasry Alyoum (Egypt).

CAIRO – After a week marked by unity, kicking, shoving and verbal fights erupted in and around Tahrir Square Wednesday as pro- and anti-Mubarak protesters faced off.

With conflicting messages, some of President Hosni Mubarak’s supporters pledged to “liberate Tahrir Square with blood,” while others said they did not want violence.

Hundreds gathered in Talaat Harb Square outside the television building on the Corniche and around Mostafa Mahmoud Mosque in Mohandessin demanding an end to chaos and the week-long protests, according to witnesses.

The renewed violence that broke out after days of peaceful protests had already resulted in several injuries early Wednesday afternoon, as the wounded were rushed to a makeshift hospital in a mosque near Tahrir Square.

Tens of Mubarak supporters hoisted printed signs that read “Yes Mubarak” as opposing sides hurled invectives at each other along the Qasr al-Nil entrance to the square, where anti-regime forces reached more than one million people Tuesday night. 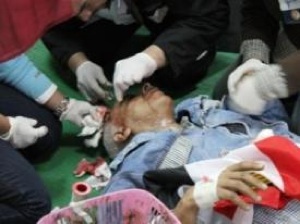 Chanting as vehemently as their counterparts inside the square, they called on protesters to accept Mubarak’s decision to finish his term and oversee a transition of power in the upcoming fall elections.

“Our president, he served this country more than 30 years, he has mistakes, no problem. Everybody has mistakes,” said Hassan, a general manager of a construction company who would only give his first name.

Insisting that every potential candidate will have nine months to present their platforms to Egyptians before elections, Hassan worried the country would deteriorate into chaos if Mubarak fled immediately.

Earlier in the morning some said the pro-Mubarak group would not try to enter Tahrir Square, but by afternoon eyewitnesses reported that people already inside were pulling down the anti-government banners that papered the square.

“President, we love you!” the men yelled in unison.

Anonymous sources at a state hospital and at the Ministry of Petroleum said employees were told to join the regime supporters in demonstrations Wednesday.

After the president insisted he would “die on the soil of Egypt” during his national address Tuesday night, deeply unsatisfied protesters camping out in the square erupted with renewed calls for him to get out.

Today, several protesters said they had been offered by ruling National Democratic Party members LE50 to join the pro-Mubarak group as they passed by the television building on the Corniche.

Some of the regime supporters said they feared for their safety, but one supporter, Waleed, who works at a Sharm al-Sheikh hotel, was confident their numbers would grow.

“Many, many, many will come now. If they are one million, we are eight million,” he said, adding that there are plenty of jobs in Egypt. “I am young, I am working here, there is a lot of work here. ”