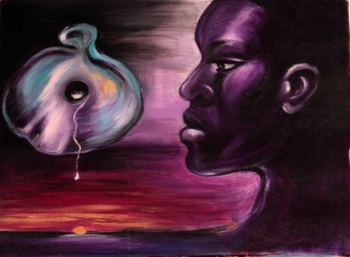 The Brecht Forum — a committed bastion of radical political thought — strives to maintain a vital discourse with the revolutionary past. So then, what to make of an art exhibit there that, at times, isn’t overtly political?

The Brecht is currently hosting “Ladies First,” an exhibition of work by Black female artists that seeks to explore the complexities of Black American history within an expressly revolutionary space.

Kawinzi’s painting suggests the interwoven pasts of ancient African art, Western graffiti and the bursting Black avant-garde. Hamilton’s photo reminds viewers that the struggles (and joys) of queer selfhood have a place in any history. Other works in the show look at (or through) quilting, mysticism, feminist performance, tribes, collage, myth-making and portraiture.

In this context of tangled histories, the knottiest things are those Amos paintings. The characters are pared-down and jet-black, nodding to 18th century silhouette portraits, ancient depictions of the figure and a raw, dichotomous concept of Black identity. Oceanic, blue-white smears — representing Heavenly clouds — echo the grand history of American abstract painting. The African-inflected aesthetic married with high-Christian imagery reflects on one of the most pertinent and difficult historical narratives of the Diaspora. The paintings, and the exhibit, are affable, conversational, a bit ramshackle (the Brecht Forum isn’t really an art gallery), but also as dense and complex as you’d like them to be. So much history, so close to home.