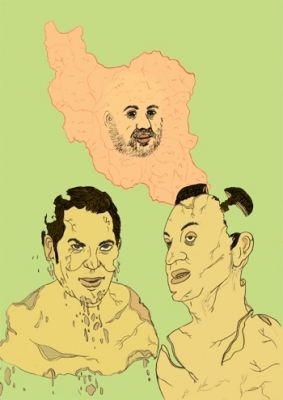 While the United States nervously observes the revolutions in Egypt and Tunisia and unrest in other Middle Eastern states, the mood among officials in Tehran is one of undisguised satisfaction. For Iran, whatever change emerges has to be better than the status quo.

Both the Iranian government and the opposition have welcomed the wave of protests in Tunisia, Egypt, Yemen, Algeria and Jordan. Each believes that it is the inspiration for the grassroots movement.

The regime’s propaganda machine has portrayed the popular uprisings as evidence of the influence of its own Islamic revolution. Ironically, the culmination of Egypt’s revolution came on the 32nd anniversary of Iran’s Islamic Revolution, Feb. 11, 1979.

Meanwhile, Iranian opposition leader Mir-Hossein Mousavi takes the view that Egypt’s uprising is modeled on the Green Movement demonstrations of 2009.

Mousavi had made it clear he would seek to elevate Iran’s influence in the region, and regional leaders are aware that he would have enjoyed greater legitimacy. According to a WikiLeaks cable, Abu Dhabi’s Crown Prince Sheikh Mohammad Bin Zayed Al-Nahyan described Mousavi as more dangerous than President Mahmoud Ahmadinejad because the latter was at least “an open book.”

As such, Middle Eastern leaders seem to prefer Ahmadinejad to the alternatives despite their troubled relations with Iran. Ousted Tunisian President Zine al-Abidine Ben Ali, for example, was among the first to congratulate Ahmadinejad on his 2009 re-election. If the prospect of reform and democracy in Iran are viewed with suspicion by Arab leaders, the reverse is not true. The Iranian state may not countenance dissent at home, but it welcomes grassroots democratic change in Arab states.

First, almost any kind of regime change is likely to produce governments that are less hostile to Iran than the current ones. Second, this will offer new avenues for Iran to build influence in those countries.

In an environment in which Middle Eastern governments have enjoyed U.S. backing over many years, Iran has presented itself as champion of the oppressed majority.
Iran has fewer problems with regional states that have a semblance of democracy than with those that do not. Islamists rose to power via elections in Turkey, and relations have never been better. In Iraq, after 50 years of tensions and a bloody eight-year war in the 1980s, Tehran now has friends in high places in the shape of an elected president and prime minister.

In Tunisia, Islamist groups that were suppressed under President Ben Ali are now emerging as political forces, with the once outlawed Ennahdha party under Rachid Ghanouchi preparing for elections.

On the other hand, unelected autocrats tend to be more threatening to Iran. WikiLeaks cables reveal that Saudi King Abdullah and senior officials in countries like Bahrain, the United Arab Emirates and Jordan urged the United States to attack Iran.

By contrast, opinion surveys show that the average citizen in the Arab states is not hostile to Iran. A poll conducted by the Washington-based Brookings Institute in 2010 showed that on average just 10 percent of respondents in Egypt, Saudi Arabia, Morocco, Jordan, Lebanon and the United Arab Emirates viewed Iran as a threat, compared with 88 percent holding the same view of Israel and 77 percent seeing the United States that way.

Thus, if these people were given greater participation through free elections, they would be unlikely to back policies hostile to Tehran. In addition, democracy in Bahrain could hand power to the Shia majority there, and even in Saudi Arabia the Shia minority located in the east could gain greater autonomy.

The presence of a diversity of political groups in place of monolithic ruling structures would offer Iran more opportunities to make inroads by negotiating and striking deals with various sides.

Contrary to the assertions of Middle Eastern rulers, Iran is realistic enough not to seek to build a new empire or even to create copycat regimes answerable to Supreme Leader Ayatollah Ali Khamenei.

In September 2009, Hassan Firouzabadi, head of the joint chiefs of staff of the Iranian armed forces, announced a shift from an ideological to a pragmatic approach to supporting Palestinian and other movements such as Hezbollah. Adopting this new tack, he said, was “a kind of investment in acquiring regional and international leverage”, and was also in the best interests of national security, by ensuring that conflict does not take place close to Iran.

For three decades, Tehran has sought to establish links with the Muslim Brotherhood in Jordan, but its efforts have been stymied by the Hashemite monarchy, leading to a troubled diplomatic relationship. Last November, the Iranian ambassador was summoned by officials in Amman after he had contacted the Jordanian Engineers’ Association, one of the biggest unions in the country, suggesting that officials were worried that Tehran was exploring alternative avenues.

In Lebanon, Progressive Socialist Party head Walid Jumblatt is now a partner with his former sworn enemy Hezbollah, and he met President Ahmadinejad on the latter’s recent trip to the country.

Tehran is thus positioned to engage with Egypt’s new government. For example, the secular Mohamed ElBaradei is viewed favorably by Tehran since, as head of the International Atomic Energy Agency, he resisted U.S. pressure to accuse Iran of producing nuclear weapons.

Mubarak’s departure will almost certainly be followed by the reopening of the Iranian embassy — absent from Cairo for almost 32 years — and could bring an end to the enmity between the two countries that has persisted for over five decades.

Iran’s position in the Middle East has rarely been better as U.S.-backed states founder one after another.

“The new Middle East is taking shape,” wrote Hossein Shariatmadari, who is the editor-in-chief of the hard-line daily Iranian Kayhan and is close to Supreme Leader Khamenei. “Contrary to [ex-U.S. president George] Bush’s wishes, it is being formed with Iran at the center.”

Ali Reza Eshraghi is the editor of the Iran Program at the Institute for War & Peace Reporting. A version of this article was originally published at iwpr.net.