This article was originally published on Truthout.

Residents who live along the coast of the Gulf of Mexico, all the way from Terrebonne Parish, Louisiana, to well into western Florida, continue to tell me of acute symptoms they attribute to ongoing exposure to toxic chemicals being released from BP’s crude oil and the toxic Corexit dispersants used to sink it.

“You can’t even go to the store without seeing sick people! You can hear them talking to people and they think they have the flu or a virus. I saw a girl that works at a local store yesterday that had to leave work because she was so sick! Others, throughout the entire store were hacking & coughing. It’s crazy that this has been allowed to happen to all of us!”

Oil continues to wash ashore. That which was already there, usually in the form of tar balls or mats of tar, is being uncovered by the weather. 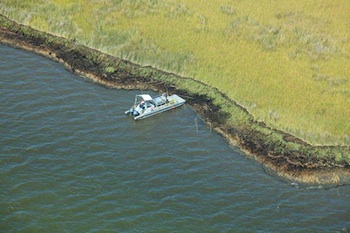 Four of the fragile barrier islands of Mississippi have had four million pounds of oil removed, thus far. The embattled coastline never gets a break. However, BP cleanup crews, who returned to work the first week of January after an 11-day break, removed another 11,000 pounds of oil from Petit Bois Island Thursday, January 6, and another 3,800 pounds from Horn Island.

“The northerly wind seems to do the uncovering [of the oil],” a cleanup supervisor said. “Southerly winds appear to be covering it up.”

“This is the biggest cover-up in the history of America,” Plaquemines Parish President Billy Nungesser told reporters on a boat trip he took with Coast Guard and National Oceanic and Atmospheric Administration (NOAA) officials last week.

Nungesser was enraged by finding vast areas of Louisiana marsh soiled with oil, while no protective boom or cleanup workers were within sight.

“It’s like you’re in bed with BP,” Nungesser fumed at the officials. “You cover up for BP.”

As BP’s stock price continues to improve, the Coast Guard, NOAA, the Food and Drug Administration (FDA) and the Environmental Protection Agency all continue to go to great lengths to convince the public, particularly those living along the Coast, that the air, water and seafood are perfectly safe. 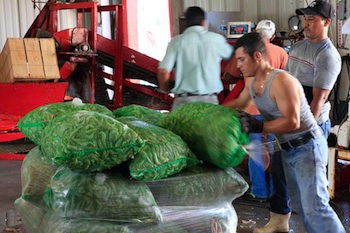 Denise Rednour, from Long Beach, Mississippi, has been suffering symptoms of toxic chemical exposure for months.

“I have pain in my stomach, stabbing pains, in isolated areas,” she told me. “Now I have a bruising rash all around my stomach. I’ve had shingles before, and that was like a rash … but this looks like bleeding under the skin. The sharp stabbing pain is all over my abdomen where this discoloration is. It’s in my armpits and around my breasts. I have this dry hacking cough, my sinuses are swelling up – not snotty nose or congestion, but the inside of my nose is swelling to where it’s almost closed. I also have an insatiable thirst. This has been going on, almost constantly, for about 2 months. It’s never gone away entirely. Sometimes I feel a little better, but it’s always with me.”

“I tested very high for most of the chemicals,” she told me on January 9. “I’m still having my symptoms and am not feeling better. I’m feeling worse, in fact.”

Independent blood testing by environmental groups and independent scientists along the Gulf is finding exceedingly high concentrations of these chemicals in people’s veins … people who live near the Coast, former BP cleanup workers and even one man who lives 100 miles from the coast … everyone is testing positive with BP’s toxic chemicals in their blood stream.

“We’re poisoned, we’re sick,” Denise added, furiously. “We’ve lost our livelihoods, we have nothing to look forward to. We’re destitute and depressed. I think everybody is walking around with PTSD [post-traumatic stress disorder], and the devastation continues in the Gulf. Yesterday I was at the beach, and the chemical smell would knock you over. There was oil sheen everywhere, tar balls, crews walking the beach picking up buckets full of them.”

“Dahr I wish to express our thanks to you for keeping this in the public eye. Since the alleged end of Deepwater Horizon fiasco, the ‘all clear’ was pronounced, and the truth is slipping away and the public is being put to sleep again … The ‘all clear’ has been sounded, yet they may as well be the Emperors New Clothes, because something is very wrong here. Something horrible is happening. And I fear for those on the coast but also those that consume what may very well be what Agent Orange was to Vietnam, Corexit is to America. Intuitively, I fear that we are unleashing a monster.”

George and I exchanged emails when it became clear that the FDA and NOAA were pushing to open Gulf waters to fishing, despite inadequate sampling and testing  of the seafood.

This inspired him to write the following:

“As a commercial fisherman, by conscience I voluntarily left the North Atlantic, as well as Alaskan waters because of the overfishing and pollution of the crab, cod, and scallop industries. Back home here on the Gulf coast waters I have seen first-hand too many times the impact of government that concerns itself with only the value of tax revenues derived from industries that are known health risks. Seafood is one of them.

“For decades seafood has been unsafe for human consumption throughout the North Atlantic, the Atlantic seaboard, and especially the Chesapeake Bay areas due to heavy metals, pesticides, sewage and agriculture run-off. Yet, with this in mind, the bureaucracies that regulate these have almost always only concerned themselves with economics. Concerns that lay offs and lost revenue seem to almost always dictate the choices that the so-called servants of the people follow. Money first and foremost, health concerns last. This applies to the consumer as well. If it isn’t dead in your face, then perhaps, what’s the big deal? So your kids have two heads, well you can’t blame us because the government said it’s safe. Years down the road this mentality lends a great deal to the term plausible deniability.

“Someone with big clout that extends not only into the Federal government, but into local administrations to the point that it is most difficult to get any of our local officials, or news agencies for that matter, to comment on these alarming reports that so many people are ill and remain ill and have the very same symptoms. Nevertheless, what do you hear from the local, state, and federal governments? The ‘all clear’ was sounded, seafood is safe, let’s promote our tourism and fishing industries to keep up our tax revenues … this song has been sung way too many times. So thanks, Dahr, for your caring, thanks for keeping this story alive. We are with you. We’re broke, and sick, but with you, nonetheless.”

While the ecology, biology and humanity that call the area of the Gulf of Mexico their home continue to suffer and die, the administrator of BP’s $20 billion compensation fund, Kenneth Feinberg, said  on December 31 that he anticipates half that amount will be sufficient to cover claims for economic losses. Feinberg is being paid by BP to “administer” the fund.