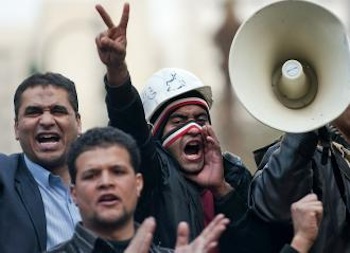 The regime of Hosni Mubarak is being squeezed harder than ever, by an explosion of workers struggles on one side, and a widening series of political protests on the other.

The strikes sweeping Egypt would have been unimaginable less than three weeks ago: postal workers in Cairo walking out and staging a mass protest to bring down the regime; a strike by state rail workers, who blocked the railroads; a massive walkout and protest by workers at the State Central Census Bureau; plus strikes by bus drivers and workers in the chemical, steel, cement, textile, tourism, petrochemical and telecommunications industries.

Workers also shut down an important service company on the Suez Canal, and even military production workers–who are under the discipline of the armed forces–walked off the job.

The Wall Street Journal grasped the importance of the strikes:

Egypt’s labor movement has been the sleeping giant of the past two weeks’ protests, and its involvement could amount to a real fillip for the antigovernment demonstrations. The workers bring experience at protests and organization to the youth-led protest movement, whose efforts to extract major concessions from Egypt’s government was beginning to stall as it entered its third week.

This wave of workers’ action has put new pressure on President Hosni Mubarak and his front man, Vice President Omar Suleiman, who has made a series of threatening statements about the possibility of a crackdown.

Suleiman, the country’s former spy chief and close collaborator of the CIA and Israel, said that continued protests would mean that “a coup happens, which would mean uncalculated and hasty steps, including lots of irrationalities.” He added: “I mean a coup of the regime against itself, or a military coup or an absence of the system. Some force, whether it’s the army or police or the intelligence agency or the [opposition Muslim] Brotherhood or the youth themselves could carry out ‘creative chaos’ to end the regime and take power.”

With the army deployed in force around the country and police violence continuing, the danger of state repression is real. But demonstrators in Tahrir Square weren’t intimidated. Instead, they launched a new strategy to respond to the government’s seeming attempt to simply wait out the occupation.

Starting on Tuesday, demonstrators decided to surround major government buildings in Cairo, beginning with the parliament building, the cabinet headquarters next door, and the Ministry of Interior as well, camping out for the night.

On Wednesday, the number of protesters in Tahrir Square was massive, close to a million people according to some estimates. So the campers outside of these three major government buildings asked for reinforcements, and thousands of people left the square to join them, because the numbers in Tahrir were more than sufficient.

The struggle also intensified in several provincial towns. An Associated Press report gives the flavor of those actions:

In one of the flashpoints of unrest Wednesday, some 8,000 protesters, mainly farmers, set barricades of flaming palm trees in the southern province of Assiut. They blocked the main highway and railway to Cairo to complain of bread shortages. They then drove off the governor by pelting his van with stones.

Hundreds of slum dwellers in the Suez Canal city of Port Said set fire to part of the governor’s headquarters in anger over lack of housing.

Back in Tahrir Square, demonstrators were discussing proposals to organize marches to surround one of the main presidential palaces in the eastern part of the city, Orouba Palace, and to march and camp outside the state television building.

The demonstrators in Tahrir also called on workers who began returning to their jobs all across the country over the weekend to begin striking and occupying factories–both public and private companies–and to walk out in mass demonstrations.

But the workers were already in action. On the morning of February 9, workers at the important KOK Chemical Factory in Helwan, which is a historically militant industrial suburb of Cairo, began a strike, followed by petroleum workers at Petrol Trade.

By the afternoon, the strike began to spread to different factories around the region and beyond. Two of the most important places are industrial centers in the Nile Delta–Kafr Zayat and Kafr al-Tawar. These are also historically militant textile industry towns that have given the regime a hard time for many years. Kafr al-Tawar is only half an hour outside of Alexandria, the country’s second-largest city.

The interesting thing is that in these strikes, the demands were to raise wages, but also the removal of the government-appointed CEOs of the companies–in many cases, of course, these CEOs are members of the National Democratic Party, the ruling party of the Mubarak regime.

Some analysts suggested the strikes were organized around sectional demands. But it turns out that by the end of the day, many of the striking workers had issued statements supporting the political demands of the revolution coming from Tahrir Square and from Alexandria.

This statement of striking iron and steel workers, which is circulating widely, reflects the dynamic:

Demands of the Iron and Steel Workers

1. Immediate resignation of the president and all men and symbols of the regime.

2. Confiscation of funds and property of all symbols of previous regime and everyone proved corrupt.

3. Iron and steel workers, who have given martyrs and militants, call upon all workers of Egypt to revolt from the regime’s and ruling party workers’ federation, to dismantle it and announce their independent union now, and to plan for their general assembly to freely establish their own independent union without prior permission or consent of the regime, which has fallen and lost all legitimacy.

4. Confiscation of public-sector companies that have been sold or closed down or privatized, as well as the public sector which belongs to the people and its nationalization in the name of the people and formation of a new management by workers and technicians.

5. Formation of a workers’ monitoring committee in all workplaces, monitoring production, prices, distribution and wages.

6. Call for a general assembly of all sectors and political trends of the people to develop a new constitution and elect real popular committees without waiting for the consent or negotiation with the regime.

A huge workers’ demonstration will join the Tahrir Square on Friday, the 11th of February 2011 to join the revolution and announce the demands of the workers of Egypt.

So the strikes are political as well as economic. Many of these workers who had returned to their jobs in the past days had participated in the demonstrations of the last two-and-a-half weeks, but as individuals. By the time they returned to the factories, they were radicalized enough to formulate their own economic demands. But they also support the political demands coming out of Tahrir Square.

The government anticipated the workers’ struggles and tried to head them off by promising to raise all wages and pensions by 15 percent starting April 1, which was actually a slap in the face. The vast majority of workers and protesters met that with a laugh–too little, too late.

Many of the protesters pointed out is that the strikes don’t actually represent the first entrance of the working class into the revolution. Rather, the working-class strike movement of the last few years has actually paved the ground for the revolution that broke out on January 25. Students and the young people were inspired by the wave of strikes of the last five years, and workers have participated in all the demonstrations and the occupations.

But now, they’re showing their power as an organized working class, not just as individuals who are part of the mass protests.

So we have mass street protests continuing, coupled with the beginning of the organized working class flexing its muscle to weaken the regime even further. That is taking the revolutionary movement to a new level.