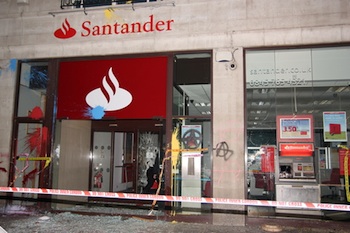 Central London was brought to a standstill last Saturday March 26 as hundreds of thousands marched against the government’s cuts to public services and activists took direct action against symbolic targets.

The Trade Union Congress (TUC) organized march far exceeded its expected turnout of 100,000, with estimates for the number of marchers varying from 250,000 to 800,000. People from every corner of Britain attended to register their anger at the austere economic policies of the government, which are resulting in jobs being axed and cuts to the budgets of public services such as the National Health Service.

As protesters gathered at London’s iconic Hyde Park to hear speeches against the cuts from trade union leaders, radical activists embarked on a “sight-seeing tour of London,” attacking banks which stand accused of tax dodging with paint bombs and breaking windows.

Symbols of wealth including a Porsche dealership were also attacked and daubed with graffiti. The world famous Ritz Hotel had a window put through with a road sign.

UKUncut, a direct action group which targets tax-dodging corporations, staged an occupation of Fortnum and Masons, the department store famous for selling pick-nick hampers for tens of thousands of pounds. The store’s owners have a 54 percent stake in Associated British Foods which stands accused of dodging £40million worth of tax.

The occupiers left the building following assurances from the police that they would be allowed to go free if they cooperated, only to be contained and in many cases arrested as they left.

Late in the day, a few hundred remaining protesters gathered in Trafalgar Square in an attempt to occupy the square for the night. Sound systems and samba bands created a carnival atmosphere, which was soured as riot police locked down the square, seemingly in reaction to paint-bombs thrown at a clock counting down to the London Olympic Games in 2012.

The government’s business secretary Vince Cable responded to the march by insisting that the cuts would continue, commenting, “we are not going to change the basic economic strategy. No government… would change its economic strategy simply in response to a demonstration of that kind.”

However, the government was clearly rattled by the militancy of the direct action. Announcing plans to consider a crack-down on liberties, Home Secretary Theresa May told the House of Commons, “I have asked the police whether they feel the need extra powers to prevent violence before it occurs. I am willing to consider powers which would ban known hooligans from attending rallies and marches, and I will look into the powers the police already have to force the removal of face coverings and balaclavas. If the police need more help to do their work, I will not hesitate in granting it to them.”