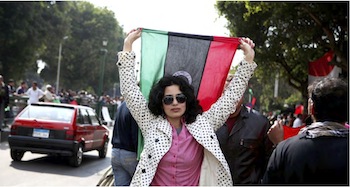 Egypt has fundamentally changed. Its people have changed. The popular uprising that swept Egypt not only toppled a dictator but is reshaping society. From Tahrir Square to Alexandria, Mahalla to Suez, Egyptians are calling for a reversal of their relationship with the state.

Egyptians have been instilled with a new sense of political agency and are embracing the revolutionary moment. But the battle to replace the underlying power structure in Egypt with a democratic system has yet to be won. And the road is long.

The Supreme Council of the Armed Forces took the reins of power on Feb. 11 after Hosni Mubarak was booted from office. The army generals dissolved parliament and suspended the constitution — in line with protesters’ demands — and will rule by decree until a civilian government can be formed following presidential and parliamentary elections later this year.

The army quickly appointed a panel of legal scholars that has drafted interim changes to the constitution that amend provisions governing electoral laws and party rules. The panel also added an article empowering the newly elected parliament to appoint a commission to draft a new constitution. The recommendations will be put to a popular referendum, but the initial reaction has been skeptical. Many Egyptians argue the changes are limited, the process hasty and the constitution discredited.

Holding elections so rapidly begs the question of whether they will really be free given that new political parties have less than six months to form, draft platforms, organize, fundraise and campaign in a nation of 82 million. Most established opposition parties, suppressed for decades, have scrambled for political crumbs thrown down from the ruling National Democratic Party (NDP) over the past 30 years and have lost all popular legitimacy.

This leaves just two political forces fully capable of running in elections later this year: the NDP and the Muslim Brotherhood. It’s essentially the same situation as before the uprising, albeit without Mubarak and his cronies at the helm. For its part, the Muslim Brotherhood is forming a political party but has declared it will not field a presidential candidate and is not seeking to gain a majority in parliament.

Regardless of the outcome of the election, the army would prefer to hand control over day-to-day affairs back to a civilian government and return to its position as the backbone of power behind the scenes.

The military has been the ruling institution in Egypt since 1952, when Gamal Abdel Nasser and the Free Officers staged a nationalist coup against the pro-British monarch King Farouk. In Nasser’s time, the military was a regular presence in the daily lives of Egyptians, arresting and torturing dissidents while police and state security played a minor part.

After Israel defeated Egypt in the 1967 war and Anwar Sadat rose to power, state security forces played a much larger role in suppressing dissent while the army retreated from public view. This trend continued under Mubarak until the military eventually became a shadowy element of political life and a silent partner to the dictatorship. But while the military’s role had become less visible — press reporting on the army has been banned for more than 50 years — its power and privilege remained intact.

Senior army officers live a life apart in self-contained military cities, complete with their own housing, sports teams and supermarkets selling foreign goods at a discount. Effectively banned by the 1978 Camp David Accords from going to war again, the Egyptian military has built a sprawling business empire that includes vast real estate holdings in the north and on the Red Sea coast, and its divisions make everything from television sets and jeeps to olive oil, bottled water and fertilizer. It is estimated that the military controls from 10 to 30 percent of the Egyptian economy.

The Egyptian army receives $1.3 billion a year in U.S. military aid and it will resist any shift in foreign policy that could threaten its relationship with Washington. Within a day of taking power, the Supreme Council of Armed Forces affirmed Egypt “is committed to all regional and international obligations and treaties.” This presumably includes abiding by the Camp David Accords, facilitating the passage of U.S. warships through the Suez Canal, maintaining the siege on Gaza and continuing to sell subsidized natural gas to Israel: none of which reflect popular opinion in Egypt.

The Supreme Council has also repeatedly warned against the wave of strikes that gripped Egypt when organized labor joined the uprising and dealt the decisive blow that toppled Mubarak’s regime. It was labor that laid the groundwork for the Jan. 25 revolt through years of strikes, sit-ins and protests. In defiance of the military, which has held back from cracking down on the labor movement, workers are continuing the strikes to call for improvements in working conditions, job security, a minimum wage, independent trade unions and the removal of “mini-Mubaraks”: the corrupt management and heads of institutions found throughout the workplace and society.

The military’s calls for an end to the strikes have been echoed in other sectors of Egyptian society, namely the middle and upper classes, but activists are already looking to the next phase of the revolution: economic and social liberation.

Within the popular uprising, gender relations took a giant leap forward. In the streets, women risked their lives alongside men to take on the police and state security forces and later in the defense of Tahrir against Mubarak’s thugs. Inside the square, women — veiled and unveiled — spoke of a new social dynamic where they felt free of discrimination, sexual harassment and the constraints of patriarchy. The struggle remains to carry those ideals from the revolutionary republic that blossomed inside Tahrir during the 18-day uprising to the whole of Egyptian society.

Also during the uprising, religious tensions between Egypt’s Muslims and its Coptic Christian minority ebbed dramatically. Chants of “Muslim, Christian, we are all Egyptian,” were common in Tahrir along with numerous acts of solidarity. Evidence uncovered from State Security archives suggests that the violent sectarian unrest that gripped Egypt in recent years was stoked by the regime as a divide-and-conquer tactic and to reinforce the idea that, without Mubarak, the country would be overwhelmed by radical Islamist groups. New documents prove the interior ministry helped orchestrate the Alexandria church bombing on New Year’s Eve that killed 21 people and wounded dozens more in the worst violence against Copts in more than a decade. And there is growing suspicion that the latest round of sectarian violence — the burning of a Church in Helwan and ensuing clashes between Muslims and Christians that left 13 people dead — was the work of counter-revolutionary forces from the Mubarak era taking advantage of the security vacuum.

Meanwhile, the military’s response to protesters in Tahrir and elsewhere is growing increasingly harsh. The army has used brute force, including beatings and shocks with electric batons, to break up peaceful street demonstrations. Hundreds of people have been arrested, even after the 18-day uprising, and there is mounting evidence that many were subjected to torture. Military courts have convicted and imprisoned dozens of civilians since the Supreme Council took power. In the absence of state and central security forces to suppress dissent, the military is filling the void.

The revolution nevertheless continues to chisel away at a power structure that it is trying to reshape. The ruling generals left largely intact the cabinet Mubarak ap¬pointed in the dying days of his reign. At its head was Prime Minister Ahmed Shafik, the former commander of the Egyptian Air Force, who had once described Mubarak as his “spiritual father.” The army indicated Shafik would preside during the interim six-month period. But less than three weeks later, Shafik was forced to resign in the face of intense pressure from the pro-democracy movement that culminated in sustained mass street protests. The army appointed Essam Sharaf to replace him, an ex-transport minister who had taken part in the 18-day uprising. Sharaf delivered his acceptance speech directly to the protesters in Tahrir square.

While a number of revolutionary demands have been fulfilled, two key ones — the repeal of the Emergency Laws that have been in place since 1981 and the release of all political prisoners — have yet to be accomplished.
For decades, state security forces acted as a giant lawless militia, spying on, kidnapping, threatening, humiliating and torturing Egyptian citizens. The State Security branch employed hundreds of thousands of people and maintained a vast network of informants, all for the simple purpose of keeping the regime in power.

One of the main demands by the protesters was the abolition of State Security. When its calls went unheeded, revolutionaries took matters into their own hands. Hundreds marched to the headquarters of State Security in Nasr City and to branch offices in Alexandria, Aswan, Siwa and elsewhere. After a standoff with remnants of the security forces, they stormed the complexes. They roamed the hallways and interrogation rooms looking for political prisoners. Some former detainees sobbed as they saw their old cells. They found rooms full of shredded paper but also many files that had not yet been destroyed. Activists handed over the saved documents to the army but not without making copies first, which they scanned and posted online, sharing evidence of phone tapping, election rigging and torture by the regime.

It was a watershed: citizens dismantling the very government body that had been tasked with repressing them for so long. It was a revolutionary moment. Many more like it are still needed.

Sharif Abdel Kouddous is a senior producer for Democracy Now!. He recently returned from Egypt where he covered the revolution from Tahrir Square. He can be reached at sharif@democracynow.org.