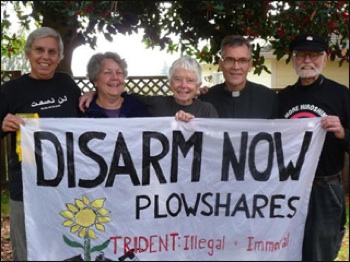 Two grandmothers, two priests and a nun were sentenced in federal court in Tacoma, WA Monday March 28, 2011, for confronting hundreds of US nuclear weapons stockpiled for use by the deadly Trident submarines.

What did they do?

In the darkness of All Souls night, November 2, 2009, the five quietly cut through a chain link perimeter fence topped with barbed wire.

Carefully stepping through the hole in the fence, they entered into the Kitsap-Bangor Navy Base outside of Tacoma Washington – home to hundreds of nuclear warheads used in the eight Trident submarines based there.

Walking undetected through the heavily guarded base for hours, they covered nearly four miles before they came to where the nuclear missiles are stored.

The storage area was lit up by floodlights.  Dozens of small gray bunkers – about the size of double car garages – were ringed by two more chain link fences topped with taut barbed wire.

USE OF DEADLY FORCE AUTHORIZED one sign boldly proclaimed.  Another said WARNING RESTRICTED AREA and was decorated with skull and crossbones.

This was it – the heart of the US Trident Pacific nuclear weapon program.   Nuclear weapons were stored in the bunkers inside the double fence line.

Wire cutters cut through these fences as well.  There they unfurled hand painted banners which said “Disarm Now Plowshares: Trident Illegal and Immoral”, knelt to pray and waited to be arrested as dawn broke.

What were they protesting against?

Each of the eight Trident submarines has 24 nuclear missiles on it.  The Ground Zero community explains that each of the 24 missiles on one submarine have multiple warheads in it and each warhead has thirty times the destructive power of the weapon used on Hiroshima.  One fully loaded Trident submarine carries 192 warheads, each designed to explode with the power of 475 kilotons of TNT force.  If detonated at ground level each would blow out a crater nearly half a mile wide and several hundred feet deep.

The bunker area where they were arrested is where the extra missiles are stored.

In December 2010, the five went on trial before a jury in federal court in Tacoma charged with felony damage to government property, conspiracy and trespass.

Most of the jurors appeared baffled when defendants admitted what they did in their opening statements.  They remained baffled when questions about nuclear weapons were objected to by the prosecutor and excluded by the court.  The court and the prosecutor repeatedly focused the jury on their position that this was a trial about a fence.  Defendants tried valiantly to point to the elephant in the room – the hundreds of nuclear weapons.

Each defendant gave an opening and closing statement explaining, as much as they were allowed, why they risked deadly force to expose the US nuclear arsenal.

Sojourner Truth was discussed as were Rosa Parks, Gandhi, and Martin Luther King.

Crowds packed the courtroom each of the five days of trial.  Each night there was a potluck and a discussion of nuclear weapons by medical, legal and international experts who came for the trial but who were largely muted by the prosecution and the court.

While the jury held out over the weekend, ultimately, the activists were convicted.

Hundreds packed the courthouse today supporting the defendants.  The judge acknowledged the good work of each defendant, admitted that prison was unlikely to deter them from further actions, but said he was bound to uphold the law otherwise anarchy would break out and take down society.

Each of the defendants went right into prison from the courtroom as the spectators sang to them.  Outside the courthouse, other activists pledged to confront the Trident in whatever way is necessary to stop the illegal and immoral weapons of mass destruction.

Bill Quigley is part of the legal team supporting the defendants and was in Tacoma for the sentencing.  You can learn more about the defendants at disarmnowplowshares.wordpress.com.